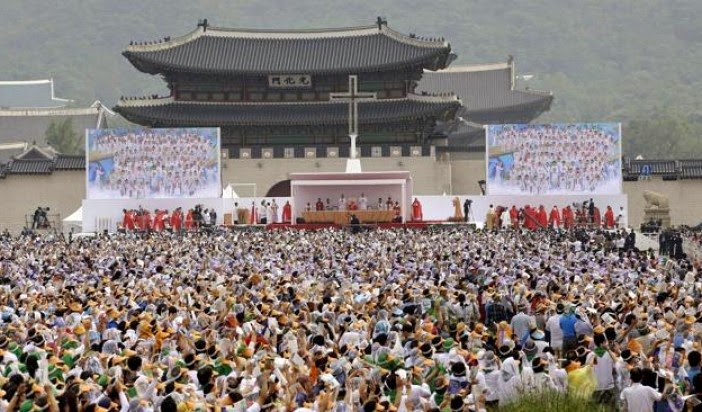 It was beautiful - the Koreans are so devout, so enthusiastic... and the Holy Father is the Pope.

What I mean by that is that he is the Successor of Benedict XVI as much as he is successor of St. Peter.  The personal characteristics of Pope Francis differ from his successors, and his style is unexpected at times - that is a pleasant surprise to some, and a jarring, unsettling development for others.  Yet watching the Holy Father's Mass last night convinced me once again there is a continuity in the Petrine Office.  The men elected change - but the Papacy remains.  The beatification ceremony was just like other beatification/canonization ceremonies presided over by a reigning pontiff.

I think there is something wrong, something missing for many people online who feel they need to defend Catholic doctrine against a Pope who doesn't match their expectations.  It seems to me they've been living in a sort of parallel Catholic universe, an idiosyncratic spirituality.  Media, especially social media can be very deceptive in how the Holy Father has been perceived - and some have deliberately misrepresented the Holy Father to foment dissent and doubt.  I also think many online project their personal fears and prejudices against Pope Francis - playing pope against pope - yet from all reports, Pope Benedict supports his successor and has promised "unconditional obedience" to the Pope.  There is no sense arguing with these folks - but they are clearly a small minority.

That said, excessive criticism can feed our pride, cultivating a sense of intellectual and spiritual elitism, including the attitude our knowledge and expertise is superior to Church authorities.  Before long, one begins to connect their teaching to their personal manners or style.  This can lead to a sort of 'cafeteria Catholicism'.  We saw how that worked for Catholic progressives and so-called liberals over the years.  These people opposed Pope John Paul II and more especially Pope Benedict - on many of the same points more conservative types condemn Pope Francis.  Though dissenters may not completely fall away, their 'evangelization' technique remains more or less impotent.  They pretty much just exult themselves, not the Gospel.

The crowds of Catholics greeting the Holy Father wherever he goes demonstrates that dissenters are in the minority. 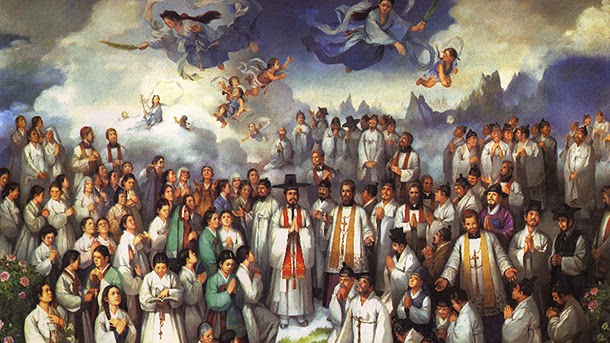 The Mass in Seoul, was one of the highlights of his trip, providing Francis with an opportunity to stress how the lessons of Korea's early martyrs were relevant today for Korea's church, which is small but growing and is seen as a model for the rest of the world.

"They were willing to make great sacrifices and let themselves be stripped of whatever kept them from Christ - possessions and land, prestige and honor - for they knew that Christ alone was their true treasure," he said. "They challenge us to think about what, if anything, we ourselves would be willing to die for."

Francis praised in particular the fact that laypeople were so crucial to the church's foundation and growth in Korea - a theme he stressed later in the day when he met with leaders of Korean lay movements. The church is counting on such laymen and laywomen to spread the faith in Asia, which the Vatican considers the future of the church. The main reason for Francis' visit to South Korea, in fact, was to attend an Asian Catholic youth festival; the church sees such rallies as a crucial way of inspiring the next generation of Catholics to evangelize.

"Today as ever, the church needs credible lay witnesses to the saving truth of the Gospel," Francis said, stressing in particular the need for their outreach to focus on the poor and most marginalized. - Source

Email ThisBlogThis!Share to TwitterShare to FacebookShare to Pinterest
Labels: Pope Francis in Korea