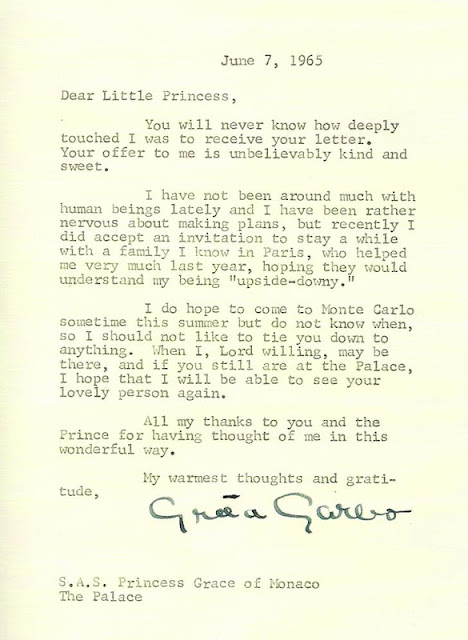 I'm getting worse, about sending my regrets, that is.  Or not inviting friends over.  Or going meeting someplace.  It is difficult to say, Non, je ne veux pas - no, I don't want to - without sounding rude.

I'm so much like the person in the poem by Naomi Shihab Nye ...

If they say We should get together
say why?

It's not that you don't love them anymore.

When someone you haven't seen in ten years
appears at the door,
don't start singing him all your new songs.
You will never catch up.


This morning I was thinking of a Carmelite I knew, how she lived in the monastery all of her life and never left.  How she returned to her cell every evening after choir, owning nothing, having nothing but solitude and pain, until her death of love. 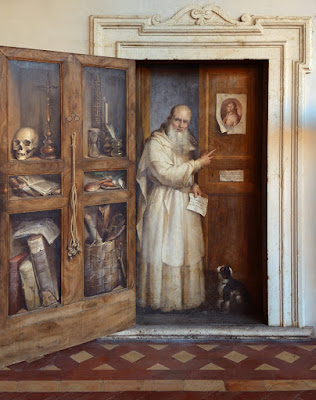 Email ThisBlogThis!Share to TwitterShare to FacebookShare to Pinterest
Labels: The art of solitude 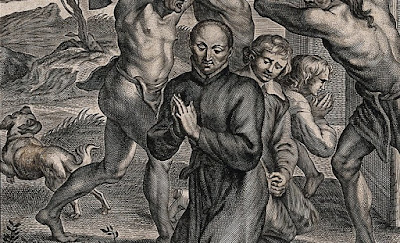 The Archbishop chose the Feast of the North American Martyrs
to release his latest letter, directly referencing today's Gospel:
"There is nothing concealed that will not be revealed..."

I just don't know - his testimony released today seems very difficult to refute or deny, and I dare say that precisely because it is the testimony of an old man, repenting of his neglects.  Reading the following is deeply moving - for me at least - since I too "am an old man, one who knows he must soon give an accounting to the Judge for his actions and omissions, one who fears Him who can cast body and soul into hell."


To bear witness to corruption in the hierarchy of the Catholic Church was a painful decision for me, and remains so. But I am an old man, one who knows he must soon give an accounting to the Judge for his actions and omissions, one who fears Him who can cast body and soul into hell. A Judge who, even in his infinite mercy, will render to every person salvation or damnation according to what he has deserved. Anticipating the dreadful question from that Judge — “How could you, who had knowledge of the truth, keep silent in the midst of falsehood and depravity?” — what answer could I give? - Source

Say what you will, I find all of this troubling, to be sure, but I appreciate very much  the Archbishop's statement of fidelity to Pope Francis: "I pray every day for Pope Francis — more than I have ever done for the other popes."

I pray every day for the Holy Father as well.  He is the reigning Pontiff and sweet vicar of Christ on earth.

That being said, I have to make clear that I can't support the following statement made by the Archbishop:


“Pope Francis himself has either colluded in this corruption, or, knowing what he does, is gravely negligent in failing to oppose it and uproot it,” Viganò said. - Crux

This comes very close to calumny, since it implies that the Pope is part of a conspiracy or lobby, determined to undermine the Faith.  To make public statements such as that is a terrible scandal and a sign that something is off with the Vigano testimony.  I can't accept it.

The other day I read something similar at another site, by a notorious author whose career has been taken up with exposing a 'rampant homosexual subculture' in the Church, proposing it as an actual cult or rite of sodomy.  Many facts and documentation of scandalous behavior by clergy appear to back up this author's research and allegations.  It is also part of the anti-Vatican II propaganda to discredit the Council and the Novus Ordo.  Somehow the Vigano testimony seems to have been incorporated into that machine, which has been focused upon Pope Francis from the moment he stepped out onto the balcony of St. Peter's after his election.  I maybe guilty of over-simplifying this, but the Vigano testimony is surely being used to discredit the Pope, and it fits perfectly into their narrative.

As the Holy Father has said in the past, there may be lobbies - be they Masonic or gay - but he points the finger at clericalism, and I think he is right.  Although, even poor Fr. Z is being led astray in all of this, defending Vigano's exile into hiding from the sodoclericalist posse out to get him, with this outrageous claim:

Again, Viganò has uncovered the root of The Present Crisis: homosexuals and homosexual predation – with the sodoclericalism that results.

I think we have to make a distinction between clericalism and sodoclericalism.

Do make regular prayer for Archbp. Viganò part of your daily routine.  When he issued his first piece, he went into hiding.  Some might think that that is a little melodramatic.  However, I know for a factthat homosexuals and mafiosi and all manner of dangerous actors run together, for their interests overlap.  In Vatican circles, people can turn up dead.  HERE  It also happens far out of Vatican circles but within the Church when it comes to unmasking the powerful and their homosexual depredations.  HERE  When it came to McCarrick, one person was afraid of winding up at the bottom of the Potomac. HERE  Archbp. Viganò has good reason to be afraid.  Homosexual crime is among the most brutal that law enforcement and medical responders see. - Fr. Z

These sensationalized conversations are not even Christian.

Email ThisBlogThis!Share to TwitterShare to FacebookShare to Pinterest
Labels: In thanksgiving for a thousand graces, Pray for the Holy Father

I've forgotten to check moderation for your comments and found a bunch and just posted them.  Sorry for the delay!   I will try to keep up and respond accordingly.  Thanks!

Email ThisBlogThis!Share to TwitterShare to FacebookShare to Pinterest
Labels: Sorry I missed your call

Saint of the Day – 17 October – St Ignatius of Antioch St. Ignatius of Antioch, pray for us!
“I am a kernel of wheat for Christ.
I must be ground by the teeth of beasts
to be found bread (of Christ) wholly pure”.

I think of St. Ignatius as a Eucharistic saint-martyr.  This morning I thought, now with St. Oscar Romero we have two individual Eucharistic martyrs imaging both the Body and Blood.

I'm not sure if I expressed it well, but the holy death of St. Oscar Romero at the moment of consecration is as edifying to me as the martyrdom of St. Ignatius.  Imagine the blood of Christ mixed with the blood of Romero.  It makes me tremble. 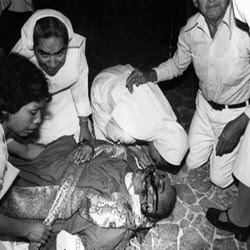 St. Oscar Romero, pray for us! 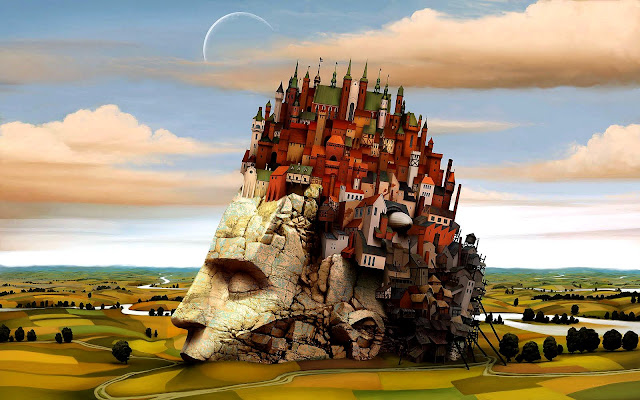 
"They were truly an example of formality. But they lacked life. They were, so to speak, “starched.” They were rigid. And Jesus knew their soul." - Pope Francis
Posted by Terry Nelson at 11:24 AM 5 comments:

Email ThisBlogThis!Share to TwitterShare to FacebookShare to Pinterest
Labels: The new scribes and pharisees 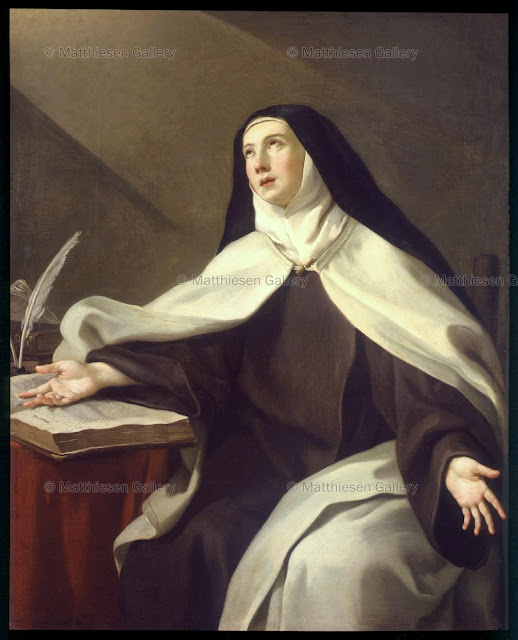 With all the Carmelites named Teresa becoming saints, Holy Mother Teresa of Jesus is going to have to be given the title 'Great' - St Teresa the Great.  Works for me.

I think I have read almost everything she wrote, many times over.  I used to think I knew everything about her and her teachings.  I visited Avila and delighted in being where she lived and seeing things she used and so on.  I was convinced I knew her 'doctrine', but now, not so much.

For me it is no longer important to know a lot about prayer as it is to simply pray.
Posted by Terry Nelson at 11:24 AM 11 comments:

Email ThisBlogThis!Share to TwitterShare to FacebookShare to Pinterest
Labels: In Thanksgiving 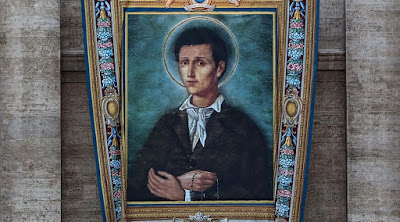 He may be overlooked since he was 'added later' and his canonization coincides with the Synod for youth, and all of that controversy.  Now, with Catholics actually casting doubt regarding the legitimacy of canonization, the saint may be further overlooked.  Somehow, that suits his reputation for sanctity quite well.

St. Nunzio is the saint whose portrait I have been working on - I set it aside to do some background work for an Nativity exhibit.)  Nunzio was a poor kid, orphaned and mistreated, he died when he was nineteen. I see him as a special intercessor for kids who are or were abused. A brief biography here. 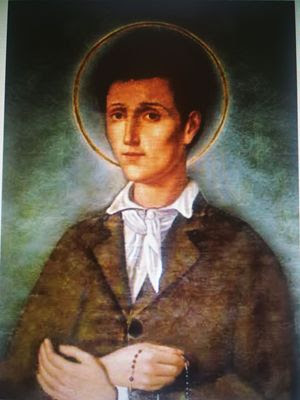