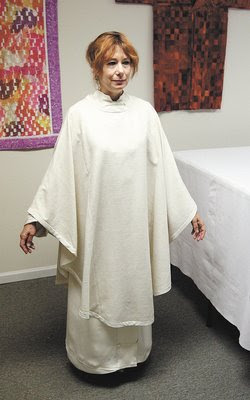 This is my first post for my new series involving personality profiling from photos. (It's going to be quite popular.)
.
Disclaimer: I do not intend to be mean or demeaning of persons, like people were to that poor college professor who desecrated the Eucharist. (Gosh! People made fun of his job, his college, his education level, his academic level - no wonder people hate Catholics.) So anyway. No. I won't go there.
.
"Father" Janice: (Claims ordination as a priest.)
.
From the looks of the photo, she appears to be 50-ish. Probably married with children and possibly grand-children.
.
It appears she colors her hair and either does it herself or goes to a neighborhood hairdresser - the roots, you know. Should have been touched up before ordination.
.
Facial traits also indicate the likelihood she may be a smoker - now or at one time. The bags under the eyes, the lines around the mouth, suggest that. Although some of the lines are probably laugh lines, so she probably has a fun sense of humor.
.
One might assume she has little or no taste as evidenced by the vestments, the Peter Pan collar sticking out around her neck, her pose, and the background art. (This isn't uncommon for spiritual people however.)
.
The environment chosen for the photo also suggests to me she is into or open to New Age spirituality and knows very little about authentic Roman Catholic doctrine, theology, spirituality, liturgy, and so on. It is obvious she has a taste for novelty in religious matters. Of course, she is not really a Roman Catholic priest either - thus she may have an aptitude for acting or impersonations. (This is strictly my personal take on the way she presents in the photo.)
.
All in all she looks to be a very nice person, in a Shirley McClain sort of way.
.
The End. (The author admits his studies are purely speculative and in no way can be considered factual.)

.
Seriously. I can read all of that from just one photo. I am so not lying or pretending or anything like that. Please, no snarky comments either - I do not want this to be an occasion for scorn or contempt for persons - seriously.
.
People to watch for in my upcoming series:
.
Cathy Alexander
.
Bishop Pellotte (aka the Battered Bishop)
.
Joee Toadjack
.
Janet Reno
.
Tonya Harding (Before and after!)
.
Stay tuned!
Posted by Terry Nelson at 1:59 PM 4 comments:

Why I do not post my real photo in my profile. 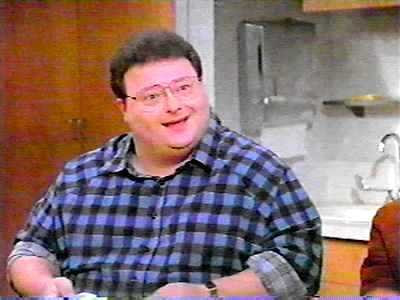 Because I'm very ugly and fat and I have never liked the way I look. Let me explain: I think I have horrible teeth, a goofy smile, a fat Irish nose, small lips, beady eyes, receding hairline - almost to the back of my neck, jowls that someone once told me looked like gopher cheeks - before they dropped, my eyebrows are too far apart, I wear glasses, - yeah - I'm just too ugly to look at. And plus I think it is sort of funny to have a profile photo that everyone who knows me knows it is not really me. And I get a lot of Internet hits this way too. Oh! And it protects my privacy because I'm not recognized in public by anyone...
.
And guess what? Very often when I do see people I once knew, worked with, went to school with, or have met briefly, I often do not say anything because I am completely convinced that;
.
A) they would not, and/or do not remember me,
.
B) are embarrassed to admit they know me,
.
C) are deliberately avoiding me because I'm not a good person,
.
D) never noticed me in the first place,
.
E) or they just don't like me,
.
F) and sometimes all of the above.
.
This is absolutely true and explains why I rarely speak first when I see an acquaintance in public; I honestly do not want to interrupt or bother them. All-rightey-then.
Posted by Terry Nelson at 12:03 PM No comments:

Email ThisBlogThis!Share to TwitterShare to FacebookShare to Pinterest
Labels: Disabled and deformed

We are all waiting for the big one.
.
Yesterday's quake in California confirmed it - I'm not the only one waiting for the next promised big one. Not just in California, but anywhere in the U.S. - we are a country on high anxiety alert - which explains why the press made a huge deal of a moderate quake that did very little damage.
.
A list of the most popular "big ones" many people probably are waiting for:
.
Another 911.
.
Any horrendous act of terrorism, but especially something nuclear - although it must be localized.
.
Another, bigger Katrina.
.
A mega volcano in Yosemite.
.
Any volcanic action in downtown L.A.
.
A tsunami - on any coast of the U.S. (All of these things must happen in the U.S. to impress us for more than a day.)
.
A mega quake anywhere in the U.S. but higher points if it hits someplace such as Memphis where we haven't built buildings to withstand quakes.
.
What most people in the waiting room DO NOT want:
.
No pandemic - no one wants to be sick.
.
No recession/depression - no one wants to be poor.
.
No all out war - no one wants to fight.
Posted by Terry Nelson at 11:12 AM 9 comments:

The picture of Dorian Leigh 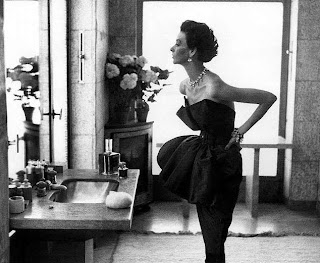 Elena at Tea At Trianon has a nice post on this model who past away earlier this month.
Posted by Terry Nelson at 12:41 PM 1 comment:

Email ThisBlogThis!Share to TwitterShare to FacebookShare to Pinterest
Labels: fashion 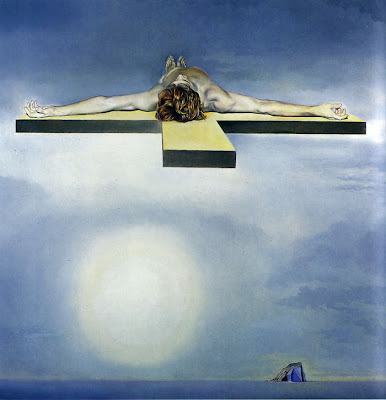 Some days.
.
Some days the memories of childhood sweep over me in a tsunami of pain and ignominy, with such overwhelming force, I can think of little else. After many years, I have learned to abandon myself in these circumstances. In doing so, I have come to realize how disabling the pain can be... like being crucified without nails.
.
I say that because I used to run from the pain. I ran into all sorts of vices trying to convince myself it never happened, and I always ended up proving it did... and proving that I was what they said I was. Although, in an odd way, my sin allowed me to forgive them.
.
Nevertheless it is still like being crucified - without nails; one is free to run - but it never goes away.
Posted by Terry Nelson at 10:01 AM