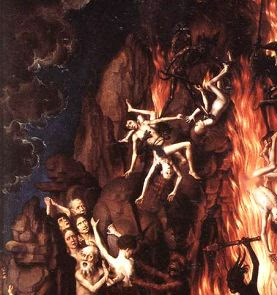 Our Lady of Fatima
I grew up with Fatima. In the late 1950's, emphasis upon the message of Fatima was rather intense in Catholic schools. The famed Third Secret was supposed to be revealed in 1960, or so everyone thought, although it was intended for the Holy Father to open at that time, not necessarily reveal. The Third Secret was believed to be filled with dire prophecies, which many believed would have to do with the end of the world.
Although I was curious about the Third Secret, I was much more fascinated with the secrets Our Lady revealed that were known. The revelation of hell, where poor sinners go - evidently in great numbers. Her Immaculate Heart, seeking reparation and assuring us of her maternal care, especially if we practice the devotion to the holy Rosary and the Five First Saturdays.
All the details of the apparitions captured my imagination and inflamed my heart with devotion. Our Lady's prophecy of the II World War had come to pass, as well as that of Communist Russia spreading her errors if the Virgin's requests were not heeded. To this day, no other apparition of the Blessed Virgin inspires me more.
The Third Secret
The Vatican announced the contents of the secret in the presence of John Paul II when in Fatima for the beatification of Jacinta and Francisco. I was stunned. I never expected it to be revealed. This past week the Vatican confirmed that the entire secret had indeed been revealed, in response to sometimes convincing arguments to the contrary. These contrary voices are many and varied, from Mother Angelica to Fr. Nicholas Gruner to a few trads and sedes. One of the most outrageous books ever written about the matter is "The Devil's Final Battle" which more or less insists upon a Vatican II conspiracy to hide the true secret. Mother Angelica was convinced that there had to be a text to accompany the secret, which was only revealed as a vision. Yawn.
"Despite claims there are still secrets connected to the apparition of Our Lady of Fatima, Pope Benedict XVI and his secretary of state said the entire message has been published and has been interpreted accurately." - Full story at CNS
One would think that is enough said, but I doubt it will satisfy anyone. People like John Venari and Nicholas Gruner will continue to pound for the full disclosure and the Consecration of Russia, through their troubling "Fatima Crusader" magazine.
People wonder why the Fatima message is often times dismissed as passe, irrelevant, or apocalyptic. It has always attracted nut jobs, the events of 1917 were spectacular and unusual, and the unfolding prophecy was as well. In the McCarthy era, many of his supporters were Fatima people, bent upon combating communism. In the 1960's and 1970's, some Fatima devotees were pretty much on the fringe of post-Vatican II reforms, sometimes identified by wearing something blue for Our Lady, while the ladies were definitely draped in mantillas, scapulars and rosaries. And they always seemed a bit tense...
Anyway, the Secret is out.
We know what we need to know. Is there a text explaining the Secret? In my opinion yes, it is everything Our Lady told the children preceding the vision of the "Bishop dressed in white, walking with halting step, etc...", later written down by Sr. Lucia,
And confirmed as accurate before she died.
The "peace plan", the way of devotion Our Lady revealed in the apparitions in 1917 is the only matter we must concern ourselves with...not the sensationalism, or controversies created by some to create doubt and division amongst believers. Listen to the Pope.
The message of Fatima is indeed relevant today...one thing I believe, the vision of the Third Secret may not simply be in the past, it could still come to fulfillment. Basically, Our Lady's message was the same as the Gospels - "Repent and believe in the Gospel." Her presence showed us that the easiest way in which to do this most successfully is through the prayers of the rosary, fidelity to the Church and the duties of our state in life, guided by devotion to her Immaculate Heart.
Posted by Terry Nelson at 12:34 PM 1 comment: