Islam and the Blessed Virgin Mary 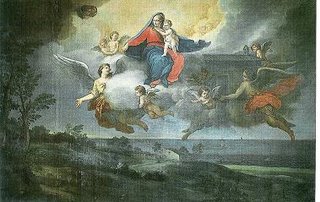 The Translation of the Holy House of Loreto.

I happened upon an interesting note on the web of a Muslim man stating he believed that peace between Islam and Christianity could very well come about through Our Lady. He said Muslims and Christians have devotion to her. Here is the article:

ROME - 3 July 2006
Mary can bring religions together says Muslim writer. An Egyptian Muslim and deputy director of a prominent Italian newspaper has suggested that Mary could be the figure to bring Christians and Muslims together.

Mr Magdi Allam of Il Corriere della Sera has launched an appeal in the pages of the national daily newspaper to Muslims in Italy to visit Marian shrines. The journalist said that he is convinced that the Virgin Mary is a meeting point between Christians and Muslims. "Mary is a figure present in the Koran, which dedicates an entire chapter to her and mentions her some thirty times. In Muslim countries there are Marian shrines that are the object of veneration and pilgrimage by Christian and Muslim faithful," he said. "Therefore, I believe that if this happens in Muslim countries, why can't it happen in a Christian country, especially in this historical phase in which we need to define symbols, values and figures that unite religions, spiritualities and cultures?" he asked.

In Allam's opinion, "the Marian pilgrimage of Loreto - Italy's National Shrine - could represent a moment of meeting and spiritual gathering between Muslims and Catholics, around Mary, a religious figure that is venerated by both religions." -ICS

Interestingly enough, he may be correct. I have always considered Our Lady's apparitions at Fatima to have at least some inferrence to Islam, since the name Fatima was the name of Mohamed's favorite daughter. Bishop Sheen also had said some things in this regard.

Along with the miraculous image of Our Lady of Good Counsel, the Holy House was once in Croatia and miraculously transported by angels to Italy. Many saints and popes have made the pilgrimage to Loreto, Bl. John XXIII went as a pilgrim to ask the Blessed Virgin's intercession for the Second Vatican Council. John Paul II had been there many times as well. It is a scientific marvel - the house, now enclosed in an edicule within the basilica, rests without foundations on the bare ground. (For further reading on the image of OL Good Counsel, see an earlier post on my other blog, Rome-ing Catholics.)

Both The Holy House and the image of Our Lady of Good Counsel were transported by angels away from Muslim invaders. The Sacred Image was carried from their onslaught of the Balkans. The Holy House was transported, first from the Holy Land to Croatia, and what seems now providential, to Italy. Some people dispute these stories as mere legends. I do not. I spent nearly a week at Loreto and never left the Holy House except when they closed the Basilica at night. I had been enraptured by it, literally. 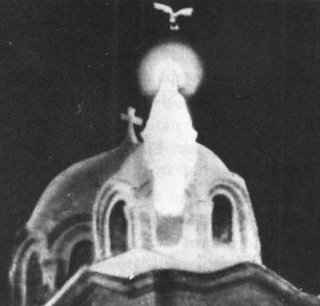 Photo of the Cairo apparition.

We need to pray our rosary I think.
Posted by Terry Nelson at 3:14 PM 13 comments:

Devil in the details... 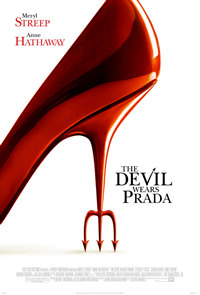 The title doesn't quite tell it.

"C'mon, it's just a fun movie!" That's what I tell people when they act surprised that I actually left the house to see a movie in a theatre and tell me my choice is wierd - for a guy. When I was just a boy I started out retail in fashion and went onto management for a large department store. A friend from all those years back stayed on and got a corporate position as Senior Designer. We sort of 'grew up' in a segment of the fashion business and had to know our stuff. I read Vogue, Women's Wear; I went to the markets, I knew who every designer was and who was wearing them, I also knew who all the top models were - by name. (Do you know who the first real super model was? Suzie Parker, a 1950's cover girl who did a stint in the movies.) Yeah, I knew too much, it was my job!

My friend and I both worked for a vice-president who was not unlike Meryl Streep's character in the film. He was a bitch too. Immensely talented and successful as well. Lucky for us, he liked us and we both learned a lot from him. His name was Andrew Markopolous, now deceased, yet his legacy lives on, with industry awards named after him, and people like my friend and I who will never forget him. Anyway, I digress, it's a fun film however, and it's entertaining for those who may have worked in fashion or retail, or for fashion magazines, or just anyone who follows fashion. It's a multi-billion dollar industry that employs a large segment of the population, so the film should do well. Having said that, I'll get to the point of this post.

Of course the devil doesn't wear Prada, he's a spirit and doesn't wear clothes, I think he just inspires their designs. Since the '6o's ready to wear designers have increasingly looked to the street for inspiration in their designs. Couture has followed suit. It's pretty obvious when most of the top designers feature barely clad models that look like hookers. 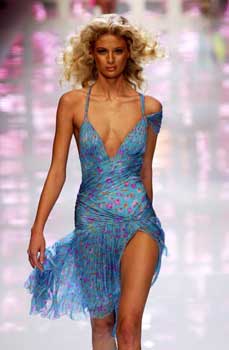 
Get back to the street, the supermarket, the office. The look is tight, and low. Even for men. Remember last year's Dolce and Gabbana's ad for men's jeans? It was hot, as the industry would say. Scandalously low rise jeans. Where'd they get that idea? The streets. Kids;
boyz and girlz wear their stuff so low you can almost see their stuff. It looks really bad on the fat ones. I don't know what they are supposed to wear, but don't dress like that, fat or anorexic. Little Blessed Jacinta of Fatima in 1918 repeated something Our Lady told her, "Many fashions will be introduced that will offend Our Lord very much - do not follow fashion." That was in 1918!

Years ago, early '70's to be exact, Carlo Carretto, a Little Brother of Jesus wrote a simple book titled, "The God Who Comes". It influenced me a great deal in the first stages of my conversion. In a chapter, "You'll all come to the same end unless you repent" where he discusses the need for repentance in our culture so steeped in hedonism - the pursuit of pleasure - not happiness. That was then! This is now! It was back then when you only saw women dressed as prostitutes who really were prostitutes. Or men dressed with revealing jeans that were usually always gay - but now the so-called "metrosexual" has evolved - non-gay men obsessed with fashion. In the chapter Caretto writes: "To begin with, we must go against the ideas of the day, for these are always opposed to the Gospel. We must resist 'the latest fashions and the spirit of the times,' which are almost always influenced by the evil one." That would be the devil.

Fashion is a clever manipulative game that makes tons of money for the purveyors. The cosmetic industry alone is a phenomenal money maker. If women really understood the mark up for the product and services they purchase - well, I think they do and it doesn't faze them. Age defying makeup, cosmetic surgeries. Shoes! Women love shoes. At major high-end retailers the mark-up on shoes is around 300%. A jacket from Christian LaCroix in the '90's was $20,000.00 - that was more than a modest car. I do not shop or read the trades any longer but I know for certain couture costs equally as much today. Why do women fall for this? And now men are doing likewise. Makeup for men? Manicures? Hair highlighting? I'd be embarrassed. It's a racket.

Fashion changes year to year, season to season, it takes people's money away, and distracts them from the essentials in life, it encourages people to become more vacuous and superficial, not to mention provocative and sensual - even an occasion of sin for others. The devil may not wear Prada, but he's in the details.
Posted by Terry Nelson at 8:46 AM 4 comments: