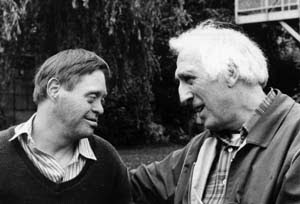 Today, news broke that Jean Vanier sexually abused women under his spiritual direction.  His conduct mirrored that of his spiritual director, Fr. Thomas Phillippe, O.P..  Stunning news for me.  But it's not about me, although almost everyone I have ever admired spiritually turns out to have a past.  It's kind of a consolation actually.  Confirming we are all sinners, in need of a Redeemer.  Thanks be to God.

Knowing that, how much more generous ought we to be towards the faults and failings of others, and never, ever look down on anyone, no matter their moral state.

I said in my alarm;
'no man can be trusted'
all have gone astray,
there is not a good man left -
there is no one who does good,
no, not even one.

In a report that will soon be released conducted by L’Arche, Mr. Vanier is accused of sexual misconduct with six adult, non-disabled women who sought spiritual direction from the late activist, author and philosopher. According to a press release from L’Arche USA, the investigation “reveals that Jean Vanier himself has been accused of manipulative sexual relationships and emotional abuse between 1970 and 2005, usually within a relational context where he exercised significant power and a psychological hold over the alleged victims.” - Finish reading here.

Email ThisBlogThis!Share to TwitterShare to FacebookShare to Pinterest
Labels: Not a good man left - no not even one 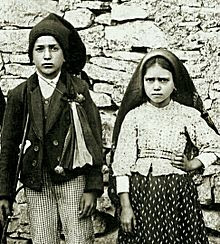 
One hundred years ago.

So much about Fatima has now been confirmed. Growing up, I was very much attached to the Fatima apparitions, the call to holiness, the promises of Our Lady - especially that she would take Jacinta and Francisco to heaven - although I was sure it would probably not be fulfilled in my lifetime. Yet it is unfolding right now. The example of the three children, especially Francisco and his fidelity to prayer, very much influenced my childhood piety, and as I learned more about prayer as an adult, he has been a guide and model for me to some extent.  Our Lady promised to take them to heaven, and canonization is affirmation of that promise.  I expect Lucia will be canonized soon.

I pray the rosary every day and have done the First Saturdays several times.  I often think about the apparitions, the promises of Our Lady, the spiritual experiences each child had outside of the recorded apparitions and after the events, especially St. Jacinta's experiences.

It seems to me her particular experiences - especially her private visions, one or two specifically  involving the 'Third Secret' and the papacy, one might be able to get a deeper understanding of the totality of the secret.  I happen to believe we are most likely witnessing some of the calamity Jacinta saw.  I also think there is ample room to believe that not just one pope was represented in the visions, but subsequent popes are most likely included.  Of course the Holy See's interpretation suggested all the popes of the 20th century had much to suffer - hence, one might conclude, St. John Paul II was not the only pope connected with the vision.

I think it's silly how some speculate, or at least wonder as to why the Blessed Virgin didn't mention plagues - specifically the flu.  Spirit Daily just posted something like that with current discussion of the Coronavirus.  Or how some expected that Our Lady ought to have mentioned the idea of papal resignation and 2 popes.  After all, it these matters are included in  other private revelations, more or less.  I always like to point out that the Blessed Virgin never mentioned the Holocaust, for instance.  What did Pope Francis once say about such things?  Didn't he dismiss stuff like that saying that Our Lady is not a news person?  Daily reporting the news and weather?  Something like that.

I'm not an expert, much less a scholar on the subject of Fatima, simply a devotee.  Yet it seems to me, the message of Jacinta allows more room for conjecture and application to our contemporary situation than the general text of the Fatima Secret - one secret in 3 parts.  Perhaps Jacinta understood things about the secret which we may be experiencing today.  I don't know?

The essential Jacinta is for me, wrapped up in the following prophetic statements:


"Look! Don’t you see many roads, paths and fields full of people crying of hunger, not having anything to eat? And the Holy Father in a Church praying next to the Heart of Mary?" - St. Jacinta Marto

St. Jacinta devoted herself to prayer and suffering for the Pope, may she intercede for him in these times of crisis. St. Francisco was deeply contemplative and hidden, praying to console the 'Hidden Jesus' and making reparation for sins. Both Jacinta and Francisco prayed earnestly and constantly for the conversion of sinners. May these little saints, who have now reached full stature and maturity in Christ, intercede for all of us.
Posted by Terry Nelson at 2:27 PM 3 comments:

Email ThisBlogThis!Share to TwitterShare to FacebookShare to Pinterest
Labels: jacinta and Francisco of Fatima 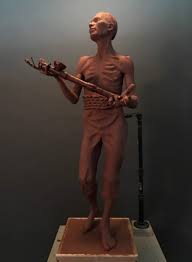 A childhood friend of my family said I was weird on FB yesterday.  He was reacting to a piece of art I posted.  I laughed.

I began thinking about a couple of weird saints I admire, whose stories I will share here.

For years, Ji was a respectable Christian, raised in a Christian family in 19th-century China. He was a leader in the Christian community, a well-off doctor who served the poor for free. But he became ill with a violent stomach ailment and treated himself with opium. It was a perfectly reasonable thing to do, but Ji soon became addicted to the drug, an addiction that was considered shameful and gravely scandalous.

As his circumstances deteriorated, Ji continued to fight his addiction. He went frequently to confession, refusing to embrace this affliction that had taken control of him.

Unfortunately, the priest to whom he confessed (along with nearly everybody in the 19th century) didn’t understand addiction as a disease. Since Ji kept confessing the same sin, the priest thought, that was evidence that he had no firm purpose of amendment, no desire to do better.

Ji’s confessor told him to stop coming back until he could fulfill the requirements for confession.  He couldn’t stay sober, but he could keep showing up.  And show up he did, for 30 years. For 30 years, he was unable to receive the sacraments. And for 30 years he prayed that he would die a martyr. It seemed to Ji that the only way he could be saved was through a martyr’s crown.

In 1900, when the Boxer Rebels began to turn against foreigners and Christians, Ji got his chance. He was rounded up with dozens of other Christians, including his son, six grand children, and two daughters-in-law. Many of those imprisoned with him were likely disgusted by his presence there among them, this man who couldn’t go a day without a hit. Surely he would be the first to deny the Lord.

But while Ji was never able to beat his addiction, he was, in the end, flooded with the grace of final perseverance. No threat could shake him, no torture make him waver. He was determined to follow the Lord who had never abandoned him. - Finish reading here. 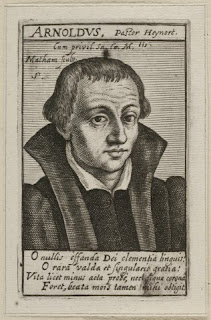 In 1572, the Netherlands had fallen culturally and politically into Protestant hands, and Catholics of the country became objects of persecution for Lutherans and Calvinists alike. As town after town fell to Protestant control, the Catholic clergy of the area were arrested and often tortured. The goal of this mistreatment was not death, but apostasy.


The pirates demanded that these nineteen priests and religious deny the Real Presence and the authority of the Pope. They refused, much to their captors’ distress. Despite a plea for leniency from William of Orange, the Dutch prince and leader of the Protestant Rebellion, the Calvinists of Gorcum transferred their prisoners to nearby Brielle, where they were martyred outside of town in a dilapidated shed. Their bodies were horrifically desecrated both before and after their deaths, out of mockery for their priesthood.

One of the secular priests, Andreas Wouters was notorious for his unchastity. When accused of this by his captors, he offered his famous reply, “Fornicator I always was, but heretic I never was.” - Source

Blessed Charles de Foucauld might be included in the list of weird saints - he founded an order without disciples - yet he was faithful.  Likewise, Matt Talbot, Benedict Joseph Labre, and others - specifically the fools for Christ - whose names I can't recall at the moment, were faithful, a bit odd, and definitely not successful - just faithful. So remember, if you found an order of monks and you are the only member, remain faithful. If you blunder through life, yet remain faithful despite everything, you can stand erect - if you remain faithful.  No one can ever take the last place away from Christ. 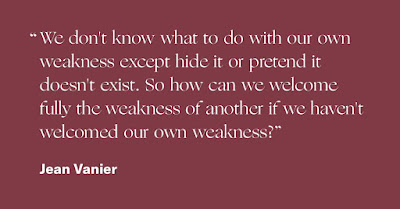