My bad - I just checked comments today and posted those in moderation.

I'm not ignoring you - thanks for commenting.  I used to get email alerts to comments, but no longer do.  That's why I miss them.
Posted by Terry Nelson at 3:57 PM No comments: 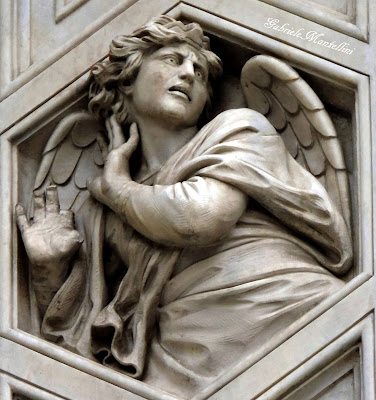 The court legislates that gay, lesbian, transgender persons are protected from employment discrimination.


WASHINGTON (AP) — The Supreme Court ruled Monday that a landmark civil rights law protects gay, lesbian and transgender people from discrimination in employment, a resounding victory for LGBT rights from a conservative court.

The court decided by a 6-3 vote that a key provision of the Civil Rights Act of 1964 known as Title VII that bars job discrimination because of sex, among other reasons, encompasses bias against people because of their sexual orientation or gender identity.

“An employer who fires an individual for being homosexual or transgender fires that person for traits or actions it would not have questioned in members of a different sex,” Justice Neil Gorsuch wrote for the court. “Sex plays a necessary and undisguisable role in the decision, exactly what Title VII forbids.” - AP

Because it doesn't bode well for religious freedom.


Archbishop José Gomez of Los Angeles, the President of the USCCB, has said he is “deeply concerned that the U.S. Supreme Court has effectively redefined the legal meaning of ‘sex’ in our nation’s civil rights law.” He described the Court’s action as “an injustice that will have implications in many areas of life.” - VN

What can I say?  I accept Church teaching on sexuality and marriage.  I accept the teaching homosexual persons are called to chastity.  I accept Catholic teaching on marriage.  I have always sympathized with same sex attracted men and women who work for the Church, especially in roles of influence, who choose to break with Catholic teaching and enter into same sex marriage, and are terminated.  I know first hand the Church does not discriminate against gay people - many have been and remain employed in parishes and chanceries, in good standing.  If they deviate from employment  policy, they can be terminated.  Yet for the most part, few are terminated on the basis of sexual inclination.  Admittance to religious life and Holy Orders is another matter.

I have been saddened over the years, when I learned of older men and women, who have been long time companions, now living chastely and celibately, dismissed from parish social and liturgical functions simply because they continue to live together - albeit as brothers or sisters.  In some cases, legal civil marriage had been contracted, against Catholic teaching, in that case these people were told not to function as lector, EMHC, or even sing in the choir.  That is an important distinction since their state in life contradicts Catholic teaching.  If you want to practice the Catholic faith, you have to keep the Commandments.  If you don't, or for some reason believe you can't, you can still go to Mass, but not receive Communion.  Catholics know this stuff.  It's similar to those who are divorced and remarried, yet live as brother and sister.

The Supreme Court is not supreme over Catholic teaching.

It's going to get complicated.  Archbishop Gomez' comments are an understatement.  The Church will be challenged by priests like Fr. Martin, SJ, along with other LGBTQ advocates in religious life and among activist laity.

Why?  What is it in Catholic teaching that so many, including Catholics, object to?  For one, the very idea that there is just and unjust discrimination.  Second, the teaching that the homosexual inclination itself is objectively disordered.  That is the stumbling block.  Culture has so embraced LGBTQ equality, it is almost impossible (even for those of us who have lived our lives, striving to live faithfully in accord with Catholic teaching),  to recall what the Catholic Church actually teaches on this issue.  Likewise, those who promote the teaching, Courage members, Joe Sciambra, and clergy, are very often marginalized and routinely condemned as homophobic.  All my life I battled these misunderstandings, I have tried to adjust my POV, and I have tried to be accepting and tolerant - but there is no way I can betray my conscience.

That said, I'll reprint here what will be the major stumbling block for those who wish to change employment requirements for LGBTQ persons in Catholic institutions, especially schools and parishes.  (Healthcare and chancery work, maybe not so much.)  The language of the CDF documents and the Catechism are what LGBTQ advocates and their families, object to the most.  Granted, the time will come when there most likely will be some modification of language, but the fundamental teaching cannot change.  There may even be concessions regarding employment, but employees can't change Catholic teaching or practice.

Some Considerations of the Response to Legislative Proposals on the Non-Discrimination of Homosexual Persons.


11. There are areas in which it is not unjust discrimination to take sexual orientation into account, for example, in the placement of children for adoption or foster care, in employment of teachers or athletic coaches, and in military recruitment.

12. Homosexual persons, as human persons, have the same rights as all persons including the right of not being treated in a manner which offends their personal dignity (cf. no. 10). Among other rights, all persons have the right to work, to housing, etc. Nevertheless, these rights are not absolute. They can be legitimately limited for objectively disordered external conduct. This is sometimes not only licit but obligatory. This would obtain moreover not only in the case of culpable behavior but even in the case of actions of the physically or mentally ill. Thus it is accepted that the state may restrict the exercise of rights, for example, in the case of contagious or mentally ill persons, in order to protect the common good.

13. Including “homosexual orientation” among the considerations on the basis of which it is illegal to discriminate can easily lead to regarding homosexuality as a positive source of human rights, for example, in respect to so-called affirmative action or preferential treatment in hiring practices. This is all the more deleterious since there is no right to homo-sexuality (cf. no. 10) which therefore should not form the basis for judicial claims. The passage from the recognition of homosexuality as a factor on which basis it is illegal to discriminate can easily lead, if not automatically, to the legislative protection and promotion of homosexuality. A person's homosexuality would be invoked in opposition to alleged discrimination, and thus the exercise of rights would be defended precisely via the affirmation of the homosexual condition instead of in terms of a violation of basic human rights.


14. The “sexual orientation” of a person is not comparable to race, sex, age, etc. also for another reason than that given above which warrants attention. An individual's sexual orientation is generally not known to others unless he publicly identifies himself as having this orientation or unless some overt behavior manifests it. As a rule, the majority of homosexually oriented persons who seek to lead chaste lives do not publicize their sexual orientation. Hence the problem of discrimination in terms of employment, housing, etc., does not usually arise.

Homosexual persons who assert their homosexuality tend to be precisely those who judge homosexual behavior or lifestyle to be “either completely harmless, if not an entirely good thing” (cf. no. 3), and hence worthy of public approval. It is from this quarter that one is more likely to find those who seek to “manipulate the Church by gaining the often well-intentioned support of her pastors with a view to changing civil statutes and laws” (cf. no. 5), those who use the tactic of protesting that “any and all criticism of or reservations about homosexual people... are simply diverse forms of unjust discrimination” (cf. no. 9).
In addition, there is a danger that legislation which would make homosexuality a basis for entitlements could actually encourage a person with a homosexual orientation to declare his homosexuality or even to seek a partner in order to exploit the provisions of the law.

15. Since in the assessment of proposed legislation uppermost concern should be given to the responsibility to defend and promote family life (cf. no. 17), strict attention should be paid to the single provisions of proposed measures. How would they affect adoption or foster care? Would they protect homosexual acts, public or private? Do they confer equivalent family status on homosexual unions, for example, in respect to public housing or by entitling the homosexual partner to the privileges of employment which could include such things as “family” participation in the health benefits given to employees (cf. no. 9)?

16. Finally, where a matter of the common good is concerned, it is inappropriate for Church authorities to endorse or remain neutral toward adverse legislation even if it grants exceptions to Church organizations and institutions. The Church has the responsibility to promote family life and the public morality of the entire civil society on the basis of fundamental moral values, not simply to protect herself from the application of harmful laws (cf. no. 17). - Source

Paragraph #13 - #16 is obviously out of date, since legislation and civil court rulings have already been established, and legal protections along with civil liberties are in place.  Equal access to housing, employment, healthcare, etc., are more or less guaranteed.  Nevertheless, the Church will have to address this very soon - like yesterday - pearl clutching won't be enough.  The bishops and the proper dicasteries will have to address this new reality. The Holy Father will have much to suffer.