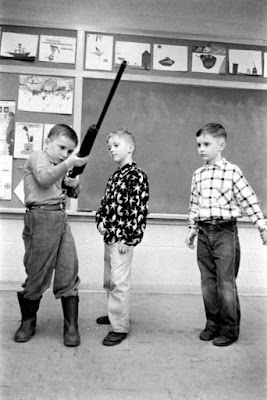 The latest school shooting took place while police with guns were outside for an hour waiting for SWAT and backup.  There is more to that story emerging, I'm just saying the good guys with guns were apparently helpless when confronted with a kid armed with an AR-15.  The kid bought the weapons as soon as he turned 18 years old - May 16, 2022.

The Texas shooter's determination to purchase combat weapons as soon as he turned legal age demonstrates that this problem really is about guns.  His mental state is a separate issue, though it seems to me he was stable enough to plan and execute his 'mission'.  Politicians cannot keep saying this is a problem due to mental illness - it really is about assault weapons and proliferation of guns.

It seems we all forget the largest mass shooting in American history - the Las Vegas shootout.

A lone gunman unleashed a rapid-fire barrage of bullets from the 32nd floor of a Las Vegas hotel late Sunday, killing at least 59 people and injuring more than 500 others attending a country music festival below, officials said.

The shooter had an entire arsenal in his hotel suite.  To my knowledge there is no evidence he was mentally ill, much less a terrorist.  That happened in 2017 and there is apparently no motive, leading to my conclusion that he did it because he could.  Perhaps it was a type of hunting or sport-shooting for him?  Maybe he wanted to add a realistic dimension to some of the online games available to kids and adults?  Google such games and these pop-up:

I don't know if these things play into the shooter mentality?  I don't know if these can be virtual training videos - it just seems to me these games feed into the cult mentality associated with 2nd Amendment gun rights.  Such games are big business.  Weapons is big business for arms trade.  I don't play games nor am I an action film aficionado, so I don't know what influence this stuff has on mass-killers.  Yet it seems to me the morbid fascination with guns and stalking prey has to have an effect upon one's personality, as well as their soul.  Especially anyone with a 'mean-streak' or who lacks empathy.  Then there is the problem of evil.

Figuring out why a shooter, mass-killer acts is definitely important.  Nevertheless - access to weapons of war like these is ridiculous for civilians.  We need legislation and bans on access and types of weapons.  We need lawmakers who are not corrupted by the gun lobby, and/or fanatically attached to the ideology derived from idolization of the 2nd Amendment.

"The Second Amendment did not come down from Sinai. The right to bear arms will never be more important than human life. Our children have rights too. And our elected officials have a moral duty to protect them." Cardinal Cupich

It is a problem of evil - it seems to me it is growing in proportion to the increase of hatred among people, a hardening of heart.  Like I said, I don't know, I'm no authority.  What I do know is that even Catholics will reject calls for reform and ignore people like Cupich and Francis when they call for change - precisely because they have hardened their hearts against them.  I dare say, many even end up hating them.  You see?  It's a problem of evil, which enters the heart through hatred.

There is a certain self-righteousness in those who blindly cling to the letter of the 2nd Amendment and promote unbridled ownership and use of guns for morally responsible, upstanding citizens determined to Make America Great Again.  John of the Cross alludes to it in The Ascent of Mt. Carmel - at least I connect the problem to it.  Vain rejoicing in moral goods.  It's the story of the Pharisee and the Publican.  St. John notes the harm which results in vain rejoicing in moral goods, e.g. one's virtues and good works as a law abiding citizen.

The seventh kind of harm is that human beings, insofar as they do not quell vain joy in their moral deeds, become more incapable of taking counsel and receiving reasonable instructions about the works they ought to do. The habitual weakness they have from working with this vain joy so enchains them that they either do not believe that the counsel of another is better, or do not wish to follow it even if in their opinion it is, because they are without the courage to do so.

Such people become very slack in charity toward God and neighbor, for the self-love contained in their works makes them grow cold in charity. - Ascent, 28:9

It seems to me, that it's a problem not simply confined to the perpetrators - the self-love and lack of charity of the 'good' is in some sense mirrored in the lack of empathy and hatred of the 'bad'.  Both permit evil to triumph.

I will close with the precaution given by the Holy Father at this week's audience:

"I pray for the children, the adults killed and their families," said Francis at the conclusion of his Wednesday general audience. "It is time to say enough to the indiscriminate trafficking of guns."

"Let us all commit ourselves so that such tragedies can never happen again," he continued. - Pope Francis

Yeah. So, "Let us all commit ourselves so that such tragedies can never happen again." 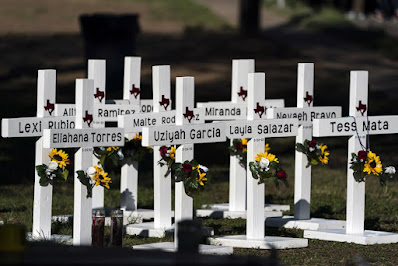 *Top photo found on Tumbler with a naïve observation: "Guns aren't the problem."


Back in high school - more years ago than I care to count - I gave a speech in an English class. My subject was the M1. I was able to borrow a rifle from our armory (I was on the rifle team), walked four blocks to the school with the rifle slung over my shoulder, and gave my speech on how to field dress the weapon.


Most kids (boys) who were able to drive to school had rifles or shotguns in their back windows if they were driving a truck.

That was then, this is now.  Guns are the problem.  The kid in Texas bought assault weapons as soon as he turned eighteen.  Snap out of it.

Posted by Terry Nelson at 12:19 PM No comments:

Email ThisBlogThis!Share to TwitterShare to FacebookShare to Pinterest
Labels: "Uvalde is in mourning. The families are having a very dark time. Your prayer will do good to them." 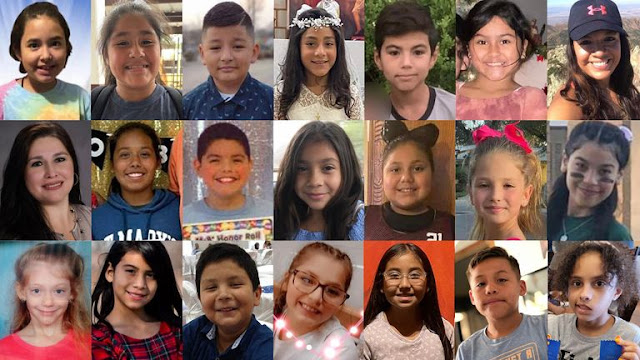 Posted by Terry Nelson at 9:25 PM No comments: