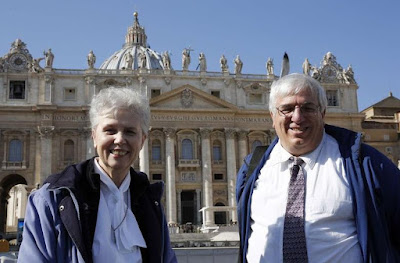 How I understand Pope Francis.

The Pope's latest statement on the resignation of the Archbishop of Paris and how sins of the flesh are not necessarily the most serious.  As well as yesterdays news the Holy Father sent conciliatory letters to New Ways Ministry, encouraging the group in their ministry and praising the work of Sr. Jeannine Gramick.  Both appear to be a sign of contradiction as regards Catholic teaching, not to mention a contradiction of an earlier condemnation by the Holy See of New Ways and the 'silencing' of Sr. Jeanine.  Not a few people were disappointed and many more very angry with the Holy Father. So Many SSA-Gay Catholics feel betrayed when the Pope does stuff like that.

Neither statements affect me, neither does his recognition of New Ways change my attitude towards homosexuality and Catholic teaching.  When I am confused by what the Pope says, I check the sources and take it to prayer.  Frequently - as a result of prayer - I comment on Facebook that I don't understand how or why so many can be confused by what Pope Francis says.  Today, I can understand healthy and reasonable questioning some of the off the cuff things he says, as well as some confusion after it is revealed he called or sent a letter of affirmation to someone.  As in the case of his letters to New Ways.

I'm not going to itemize all the details in either case.  (Go here for that.) Online Catholics and those who watch EWTN know about the controversies.  I don't have any criticism for those who are convinced the Pope errs and ignores Catholic teaching.  Suffice it to say, I disagree with them.  My love and respect for the Pope remains firm and intact.

That said, todays Gospel is helpful - for me at least - allowing me to remain at peace before the mystery of Christ, knowing the teaching of Christ: “My Father is at work until now, so I am at work.” (Jn 5:17)  Todays Gospel, Christ is speaking about the apparent contradiction between his ministry and that of John the Baptist.

For John came neither eating nor drinking, and they said,
‘He is possessed by a demon.’
The Son of Man came eating and drinking and they said,
‘Look, he is a glutton and a drunkard,
a friend of tax collectors and sinners.’
But wisdom is vindicated by her works.” - Mt. 11:16-19

I think the Gospel of Matthew holds the answers to many questions regarding the papacy of Pope Francis.  The Call of Matthew is especially telling, as is todays accusation against Christ: ‘Look, he is a glutton and a drunkard, a friend of tax collectors and sinners.’  In that instance, Christ doesn't answer the dubia in the hearts of those present - he instead explains, 'wisdom is vindicated by her works'.  It is only a bit later in the Gospel that Jesus answers the dubia and explains from his heart, what his purpose is about.

The Pharisees saw this and said to his disciples, “Why does your teacher* eat with tax collectors and sinners?”
He heard this and said, “Those who are well do not need a physician, but the sick do.*
Go and learn the meaning of the words, ‘I desire mercy, not sacrifice.’ I did not come to call the righteous but sinners.” - Mt.9:9-13

Jesus Christ is the same yesterday, today and tomorrow.  Catholic teaching cannot change.  Mortal sin is mortal sin - we who are sinners and have sinned just as much as those who some wish to be condemned, we have been formed by Catholic teaching, we know the path to salvation is narrow and constricting.  Not everyone accepts that in the same sense, some struggle, some believe they can't accept this or that.  All is not lost, however.  The Holy Father knows that, I believe.

For "life is so short, the path leading to eternal life so narrow, and I know the just man is scarcely saved, while the things of the world are vain and deceitful, and all comes to an end and fails like falling water. The time is uncertain, the accounting strict, perdition very easy and salvation most difficult... I know well I must render an account of everything - from the beginning of my life as well as this later part - unto the last penny, when God will search Jerusalem with lighted candles, and it is already late - the day far spent - to remedy so much evil and harm..." - St. John of the Cross

So I think the Vicar of Christ is calling out to his sheep, going out to find them and care for them, to bind their wounds and to let them know God loves them - while there is still time, knowing it is already late, the day far spent, to remedy so much evil and harm.  With his Master, the Vicar of Christ can say:  “My Father is at work until now, so I am at work.” (Jn 5:17)

Pray for the Holy Father.  Our Lady asked for that at Fatima, revealing he would suffer much.