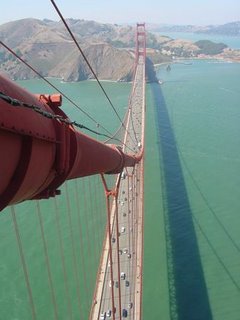 A documentary depicting suicides off the Golden Gate Bridge in San Francisco, by Eric Steele.

It opened in London this weekend, and not to rave reviews. I saw an interview with Eric Steele, actually a couple of them. He strikes me as very sympathetic and sincere, yet not at all voyeuristic or exploitative, but rather serious about revealing the desperation of persons seeking the final solution in their lives. In the process of filming, he and his crew did everything they could to prevent the suicides he filmed, and were indeed successful a few times.

I wonder what it is about the bridge that attracts people from around the world to end their lives there? It is beautiful, but kind of cold, yet it remains the most popular place in the world to end one's life.

I've known people who have ended their lives. I never thought they were particularly neurotic or mentally ill. They just seemed to have no other alternative. One fellow struggled with alcoholism and a dead end career. Coming from a wealthy family, I know he felt as if he had failed in life. Of course he must have suffered from depression in order to kill himself, but he isolated himself, and no one could have helped him - he wouldn't let anyone in. Evidently, life simply lost its purpose, its meaning for him.

Does anyone remember the famous French couture-model/actress, Capucine? She played opposite Peter Sellers in "Pink Panther" portraying the wife of Inspector Clousseau. Several years ago she threw herself out of a Parisian hotel window, killing herself. Audrey Hepburn said in an interview about her friend that it was because she couldn't face growing old. - that sounds depressing.

For years we have hidden the idea of suicide, never is it mentioned in the obituaries, although you can usually tell who killed themselves when it reads, "died unexpectedly" - obit-code for suicide. We've heard more about it in the last few years due to the increase of teenage suicides, yet it still is rarely discussed except to say things like "what a waste" or, "what a stupid thing to do - why didn't they ask for help?"

To answer that I would be willing to guess that the suicide thought their life was a waste as well, while they probably did try to reach out for help at various times in their life. I also think that they would agree, if we could hear them speak, that it was definitely a stupid thing to do, adding, that they would have preferred not being filmed in the act - it's never graceful - and that is meant to be a double entendre.

Nevertheless, I believe the film is an important work in the study of suicide - although I have not viewed it, only clips. I think we need to care about the subject - more precisely, the people.
Posted by Terry Nelson at 8:46 PM 7 comments: