24 Hours for the Lord 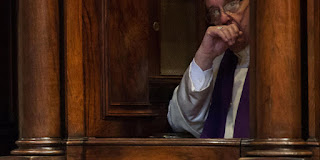 I want, I need to go to confession.

For Confession times in the Archdiocese of St. Paul - Minneapolis for this special 24 hours, go here.

Let us place the Sacrament of Reconciliation at the center once more in such a way that it will enable people to touch the grandeur of God’s mercy with their own hands. For every penitent, it will be a source of true interior peace.
-Pope Francis

Email ThisBlogThis!Share to TwitterShare to FacebookShare to Pinterest
Labels: Confession

From the men who love them. 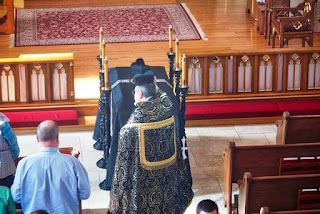 This shot, with the juxtaposition of birettas,
touched me and makes me consider my own impending death.
- Fr. Z

Fr. Z was posting on the untimely death and unsolved murder of a wonderful priest, Fr. Alfred Kunz.  Fr. Z writes about it here.  It maybe explains why Fr. Z has a Conceal and Carry permit.  What Fr. said about 'impending death' seems to allude to the fact that none of us know the day or the hour, so go to confession, and always be ready, and so on.  I pray daily for a happy death, to be preserved from an unprovided death, and I examine my conscience midday and at bed time - I also need to get to confession.  I don't carry any more protection than the scapular, Miraculous Medal, the rosary and Holy Water.  No guns, no knives.

Death is easy to think about at my age.  Likewise, I have several friends and acquaintances who have been diagnosed with cancer.  A few are terminal.  It's so important to be respectful of others who are suffering.  To be kind to one another, since life is so short and so uncertain.

Badger Catholic has another story on the murder of Fr. Kunz here.
Posted by Terry Nelson at 11:41 AM No comments:

Email ThisBlogThis!Share to TwitterShare to FacebookShare to Pinterest
Labels: Please pray for my friends diagnosed with cancer-thank you 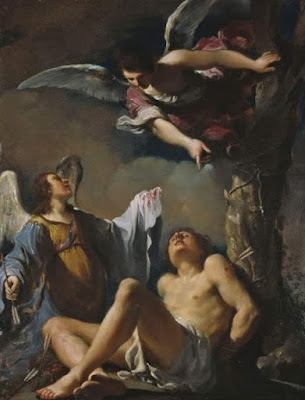 So.  Now the 'scandal' of the 'forty gay Italian priests and seminarians' is going mainstream.  DailyBeast has the best, albeit irreverent report on the matter, tracing the origins back to the Italian version of Drudge.  The curious know the story by now.  Unfortunately, the author at DailyBeast titles her tabloid piece, "Confessions of the Vatican's Favorite Male Escort" - conveniently making this story out to be some sort expose of a clandestine, underground network of homosexual priests - as if it is part of business as usual in the Vatican.  Indirectly, it's a story attempting to loosen up Catholic teaching on the non-approval of homosexual acts.  It's also a story which feeds the conspiracy theories of anti-Catholic, anti-Francis Catholics.

Joined to this story is the 'breaking news' of the Honduran prelate who is accused of improper sexual relations with former seminarians and laymen:  "Allegations of serious sexual misconduct by Auxiliary Bishop Juan José Pineda Fasquelle of the Archdiocese of Tegucigalpa, Honduras."  Edward Pentin reports this latest expose.  The revelations are linked to Cardinal Maradiaga and even involve Pope Francis, leading Pentin to ask  [why] "Pope Francis has not taken any action with respect to a report submitted by the Vatican investigator, which reportedly has been in the Holy Father’s hands since May of last year?"  That seems to me to be a convenient, albeit passive aggressive smear to connect Pope Francis to the homos.

Not too many years ago during the priest scandals, the boy's club of Sebastian's Angels made the headlines - a loosely organized group of gay playboy priests.  Hence the title of this post.  Readers will remember that while the Bishop's scandal unfolded - the biggest, most scandalous story involved the double life of Fr. Maciel, founder of the Legion of Christ.  For years the Maciel's congregation denied the stories and vehemently assailed them as lies by supporters of the Legion and devotees of Maciel. Strikingly, Maciel was a favorite of St. John Paul II. Amazing. Then came Fr. Cutie- the famous 'Fr. Oprah' priest, as well as the other EWTN priest defectors - not gay, not criminal, not corrupt - just unable to live the celibate life. In the past decade or so, there have been dozens of cases of priests living double lives - priests in important positions as well as ordinary parish priests. Gay and straight. Of course, there was also Fr. Corapi, whose case demonstrates it is not always just about sex either.  Money is a necessary component in corruption.

Avoid greed in all its forms.

Salacious gossip makes great news.  Years ago I would come up with anecdotes about gay priests and religious, sometimes agreeing there is a 'network' or 'gay mafia-lobby', other times disputing there is any type of serious organized, monolithic group.  Celibate priests often have support groups, even those who are same-sex attracted may have a support group - a support group is not necessarily a network.  They have friends, former students, and so on, who know them and whom they trust.  Some may be corrupt, most are unlikely to be.

These types of stories are frequently exploited and cause alarm among believers and enemies of the Church.  They are an anti-Catholic, anti-papist, anti-clerical dream come true.  If the stories are true, then there needs to be a clean-up.  It will happen, just as last Sunday's Gospel of the cleansing of the Temple assures us.  If and when the pope knows about them, I'm quite certain he is doing something about them.  Ordinarily, especially if it doesn't involve criminal activity, these things are handled privately, to avoid greater scandal.

Check and verify sources - even Catholic sites can be used to smear the Church.

Unfortunately, these stories are used to attack the Pope, Catholic teaching, and celibate priesthood.  Moreover, these stories create panic over homosexuality in the priesthood, and not a few will believe it is their responsibility to out and expose priests and religious who may experience same sex attraction, yet live faithful, chaste and celibate lives.  Others will use the story to lobby for homosexual causes.

These stories do not shock me or disturb me as they once did.  Of course I'm always disappointed and dread the idea of a faithless priest and would hope he would leave the priesthood or be laicized, but it doesn't shake my faith.  People online and journalists need to be very careful about editorializing stories like these, as well as repeating speculation regarding details not confirmed or rumored to be true.  The stories themselves can be nearly as harmful as the acts.  Some of us who have lived sinful lives tend to share too much and make rash judgments against others - we need to take our own conversion deeper and avoid judging or condemning others.

"Reflect that many are called and few are chosen and that, if you are not careful, your perdition is more certain than your salvation, especially since the path to eternal life is so narrow." - S. John of the Cross

Email ThisBlogThis!Share to TwitterShare to FacebookShare to Pinterest
Labels: corruption, gay priests, Issues related to homosexuality and efforts to change Catholic teaching on gender and marriage

Yet Jesus walked in peace through the midst of them. - Luke 4:30

That's how we get through these attacks upon the Church made by fellow Catholics.

We encounter Christ rejected, in the sin that wears a thousand faces.

How could we possibly have the heart to mock these people or to hate them, this multitude of sinners with whom we rub shoulders?

Email ThisBlogThis!Share to TwitterShare to FacebookShare to Pinterest
Labels: Be wise as serpents-innocent as doves

When the shit hits the fan ... literally.