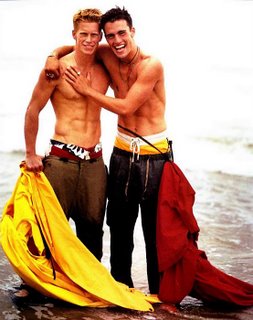 So, "how does a young man remain sinless" (Psalm 119) in the summertime? First of all he should pull his pants up and probably not shop at Abercrombie & Fitch - although they have the coolest clothes - that sometimes look like they came out of the dumpster - but they are cool.

I could talk here about 'urban wear' and 'beach wear' or "club wear", and all sorts of suggestive and immodest fashions, but that's pretty obvious to everyone, right? Well, even if it isn't, I'm not going there. We all should know that minimal clothing is seductive. We know movies and TV and MTV is sexualized beyond belief. Music as well. Some of the rap and pop music pretty much glorify certain sex acts as well as promiscuous and lesbian behavior. (The homo stuff just isn't cool for guys - thank God.) Watch the Music Awards shows - it's pretty graphic choreography. So kids are surrounded by sex - you hear it in their language, and the age level is getting younger all of the time.

So how does any guy remain sinless? Especially in the age of Viagra? Confession, confession, confession - the Sacrament of Reconciliation - as often as needed. Frequenting the Sacrament with contrition - and a firm purpose of amendment of course - even if it seems like you 'can't' amend, or do not 'feel' like you can - try and understand that you 'will' it. Holiness is in the will.

Daily prayer, especially the rosary, and daily Mass when possible. Mental prayer or meditation is essential - where the daily examination of conscience is an obligatory component. Another good form of prayer is Lectio Divina - which is meditation/mental prayer and reading scripture all rolled into one. The other means is the practice of recollection outside the time of prayer; keeping one's self in the presence of God through short little prayers or aspirations, using the name of Jesus, and most especially, by frequent spiritual communions. Spiritual communion renews our awareness of Christ's presence in the Eucharist and renews our communion with him in "His silent loving action in the Eucharist" - at work in us through our explicit desire - thus His presence in us is "at work to accomplish infinitely more than we could ever ask or imagine." Then, try to spend some time each week or more in the presence of the Blessed Sacrament in adoration or simply enjoying to be in His presence. Cultivate devotion, confidence and love. Check out John Paul's book, "Theology of the Body" or other good commentaries on it, the book clears up many things concerning sex.

Some guys get themselves habituated to certain sins. All men, especially young men, have to be aware of their own bodies - not just to pump up, or how they are dressing themselves - but their biology and psychology. Our sexuality is a good thing and has one purpose, that of procreation. So many young people have problems with "delaying gratification" in a culture where everything is immediate. Men have built in release valves as it were. The temptation to masturbate goes away if you occupy yourself with something else - anything to take the focus off "it" - if you know what I mean. (Although, I don't see how that is possible with some kids who walk around the streets pulling at themselves all of the time - what a disgusting habit picked up from rap artists and other street trash. Don't ever do that!) Men's bodies have a natural release, it's politely referred to as 'nocturnal emissions'. Men do not have to masturbate. It won't 'fall off' or 'wither up' if you don't use it, as some proponents suggest in a round about way by saying it could lead to prostate cancer. Nonsense! The devil likes to suggest these things as well, it's ludicrous. (In the way of perfection, even natural responses from one's body ought not to be sought and one must remain detached from the pleasure, yet unperturbed when it occurs. And do not let your mind or the devil try to trick you into thinking the experience is a sin because you experienced pleasure - that is often a trick to keep you in that sexually charged moment and an invitation to commit a sin auto-erotically. )

As for other types of acting out sexually, these may have a compulsive dimension as well. One has to work at it. But never focus or dwell on the temptation or the act - it takes hold that way. Let impure thoughts go in one ear and out the other, don't focus. Sometimes they stick in the mind - don't focus on them, go on as if they are not there. (Don't get all uptight and try to repress them however, it makes them worse, be calm and let them blow away like "leaves on a windy day".) And if you feel like you've sinned by entertaining the thoughts - don't let your body or the devil convince you that you have already sinned gravely so you may as well go all the way. That is so much his best trick. The other really bad trick of his is, if you do fall, he suggests doing it again, since you've already sinned anyway. Every consent to his wicked suggestions forges another link in his chain - break it immediately through an act of contrition and go to confession as soon as you can. These acts of humility and repentance are your arms in battle, with trust in the Divine Mercy of course. That reminds me, pray the chaplet of Divine Mercy, even if you are steeped in sin, Jesus promised He would not fail to grant His grace and mercy to "even the most hardened sinner, even if he were to recite the chaplet only once." It is a very powerful prayer.

Maybe you've never heard of it, but there is a mortification referred to as custody of the eyes. It's when you keep from indulging your curiosity about things, the practice trains you to control your "wandering eyes". It can be exercized by not watching TV, or not listening to certain music at times, or not checking some one out on the street or at the beach. As you drive, ride or walk, or are just sitting there, you're going to see someone with a great body and perhaps little on it. You saw it, maybe you looked twice, it's not a sin - even though your body may have reacted. Take that reaction as a warning, divert your attention, move on, jump in the pool - do something. But do it without anxiety and without over reaction. Gradually one learns to not objectify and sexualize everybody and everything, especially if you do not make your body and other peoples body "an idol". There is a certain amount of idolotry in our culture that is directed toward the body. We live in a time wherein the most obvious sign of outward devotion may be properly called, "the cult of the body". We've got to stop our "sacrificing to idols" - a pagan custom revived in our day not unlike that which prospered in ancient Rome and Greece.

One more thing - never ever indulge in pornography - do not even have it near you. No magazines, no videos or DVDs, no nothing. The imprint upon the memory and imagination is powerful and diabolical. If you come across it you can't help the fact that you saw it, but do not let yourself get into it. Move along. Mortal sin is committed only when you willingly and deliberately entertain yourself with it, look at it or watch it indulgently, or act upon it. To see it accidently or even look with some curiosity, yet then to reject it - even though your body may have reacted - is not grave sin, don't get tricked into going further. But never have it around or buy it.

Be patient - but not too patient with yourself, remain calm, ask for help in prayer, keep going to confession and never give up. Chastity is possible - even in the summertime - and maybe even in Los Angeles.
Posted by Terry Nelson at 2:10 PM 10 comments: