"Children, be on your guard against idols." 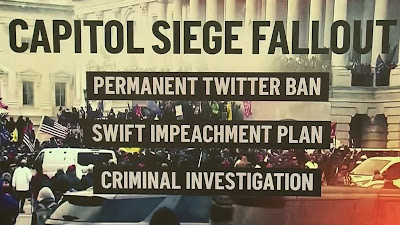 We know that we belong to God,
and the whole world is under the power of the Evil One. - 1 Jn 5

This past week, Josiah Colt was one of the insurrectionists who stormed the Capitol and broke into Congress. He has since apologized profusely, begging forgiveness for violating the 'sacred ground':

"While in the Chamber I told the other protesters that this is a sacred place and not to do any damage. Some of them wanted to trash the place and steal stuff but I told them not to and to leave everything in its place. We're still on sacred ground." - source
I was a bit cynical about his apology, perhaps he's hoping for a pardon from Trump?  More likely, he understands that he can be charged and prosecuted, or at best, find himself unemployed for a long time, after potential employers see his social media activity and current media exposure.
Just yesterday, a friend who has a couple of websites and her own news aggregator site, posted a bit of fake news about the discovery of discarded ballots in Georgia.  There is a fair amount of documentation refuting that story.  I didn't comment but left a link to an AP article contradicting the story.  I'm not getting into linking all of these threads, I just want to note that my friend said she doesn't believe anything from the AP.  Trump campaigned on fake news - repeating claims that MSM was totally and completely fake news, implying that he and a few rightwing news outlets was the only source for truth, Trump picked up on every conspiracy theory and used them to promote his lies and half truths.  The result was a huge success with his followers and supporters.
“People were willing to die for this man and he just threw them all under the bus. That’s the only thing that’s shameful about the events of the past 36 hours,” Nick Fuentes.
Until, faced with the blow back after the assault on the Capitol, wherein 5 people lost their lives - for him (yet as of this writing, I haven't heard or read if he even extended sympathy for the deceased and their families) Trump turned on his supporters.  The last I heard, his last ditch effort to save his 'legacy' by denouncing those who attacked the Capitol, some of the MAGA people have turned on him.
"After years of fidelity, Donald Trump's most ardent online fans have finally turned on him.
All it took was for the president to acknowledge the reality of his loss a little over a day after they, the MAGA faithful, stormed the Capitol in a violent attempt to stop the certification of President-elect Joe Biden’s win.".- Politico
Yet that won't deter his pro-life militia and Catholics for Trump, inspired by such luminaries as Archbishop Vigano, followed by Catholic sacerdotal-personalities Fr. Pavone, Z, Heilman, et al - along with the EWTN Night Gallery network of dark fantasies and pro-Trumpsters and anti-papists.
Children, be on your guard against idols.
Seemingly unrelated, yet returning to the title of this post, the final words of today's first reading at Mass made a deep impression upon me - a sort of wonderful reprimand after engaging with people online over the past few days, and watching news coverage almost non stop: "Children, be on your guard against idols." I've pondered it all morning, so now I would like to offer a couple of thoughts which compliment my own.

“Once capital becomes an idol that presides over a socioeconomic system, it enslaves us, sets us at odds with each other, excludes the poor, and endangers the planet we all share.”
- Pope Francis, Let Us Dream: The Path to a Better Future

"As Francis also says in Fratelli Tutti: “We need to learn how to unmask the various ways that the truth is manipulated, distorted and concealed in public and private discourse.”
Post-truth journalism is not just about narratives for financial profit; it can also be for political or ideological ends. Whole media organizations can degenerate into “an association of individuals united against a perceived common enemy,” as Francis puts in Fratelli Tutti referring to “digital campaigns of hatred and destruction.” - Austen Ivereigh
“Whoever takes refuge in fundamentalism is afraid of setting out on the road to truth. He already “has” the truth, and deploys it as a defense, so that any questioning of it is interpreted as an aggression against his person.”
- Pope Francis, Let Us Dream: The Path to a Better Future
Happy New Year as we return to Ordinary Time.
Posted by Terry Nelson at 12:28 PM 6 comments:

The attack on the Capitol an “affront on our American democracy” 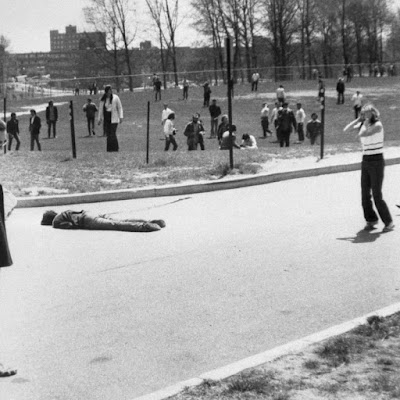 I have never been this angry since Kent State.

Email ThisBlogThis!Share to TwitterShare to FacebookShare to Pinterest
Labels: Invoke the 25th or Impeach

After the five thousand had eaten and were satisfied,
Jesus made his disciples get into the boat
and precede him to the other side toward Bethsaida,
while he dismissed the crowd.
And when he had taken leave of them,
he went off to the mountain to pray...
When Jesus sent the disciples away, and while he dismissed the crowd - that is the time to approach him.  When no one can prevent you from approaching him - no one to condemn or scold you.  This is the moment of genuine prayer and healing.
Posted by Terry Nelson at 11:16 AM 2 comments: 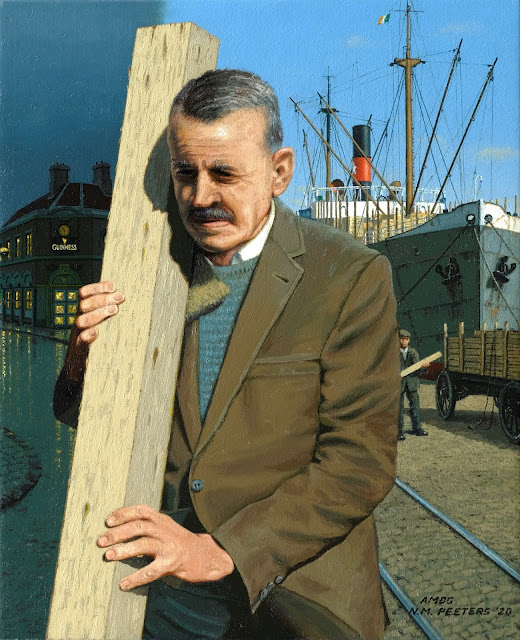 It is a wonderful painting.  The narrative posted here, written by Nico Peeters, was sent to me by a friend of his.

“ Matt was a common laborer, working most of his life at a timber factory on the quay of Liffey River in Dublin, where ships used to discharge their cargo of timber. What makes his life special and at the same time very recognizable, is his struggle to get rid of his addiction to alcohol. He regularly fell back, but strengthened by the grace of God, he at last conquered himself. He attended Holy Mass whenever he could and nurtured by the Holy Eucharist, he grew in living a decent life and self denial. He has always been loyal to his patron and kept working until he died at the age of 77 in 1925.

This painting depicts, at the left, the always latent present temptation of reaching out to alcohol again, when things become difficult. Liquor may provide some relief, but at the end it always leaves one in darkness and loneliness. From the right the light of Christ illuminates life and gives strength to withstand temptations. The log in Matt’s hands symbolizes Christ’s cross, which acts as a barrier between him and temptation. We are not able to redeem ourselves, only Christ delivers us from evil.

At the quay a typical timber ship from the twenties and a lorry. The fellow laborer behind Matt shows the solidarity by his colleagues, who relieved him, when he became older, from too heavy labor and provided him a small burlap sack to prevent logs sliding off his slightly sloping shoulders. Still Matt accepted all hardships from life in a cheerful mood, being aware of the glory awaiting all those, who are not afraid to surrender to Christ, Who is the Alpha and Omega, beginning and end of all times.” - Nico Peters 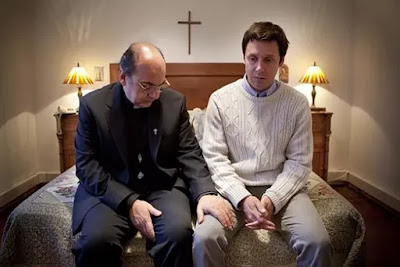 I was looking over some old posts, regarding gay Catholics and the differences of opinion regarding the topic.  Over the years I bent over backwards defending Catholic teaching - because it worked for me.  The more public I became, the more I heard from critics, gay and straight.  Some telling me that my life wasn't good enough - since I lived with a man - my longtime companion.  Over and over again, I had to assure my accusers that I was faithful to Catholic teaching.  Frequently, some would say I couldn't be.  Amazing since my spiritual directors and confessors all agreed that I was.

I'm not portraying myself as a saint or some sort of example, I'm just pointing out how outsiders, those who only know me superficially were so willing to judge me.  Foolishly, I ventured into the gay Catholic controversy with so many people, I can't believe I felt obligated to explain myself.  Some would have me denounce this gay group or that group, this priest or that writer for their support of lgbtq issues.  Sometimes I was told I was risking my immortal soul for not condemning so and so, or some new movement.  Sometimes other bloggers would 'out' me based up nothing factual - just that I was too soft on gay issues.  Many online are always on the hunt, ready to expose gay people - accusing them to be infiltrators.  And I fell for all of that nonsense.

I'm embarrassed for some of the posts I've written, often critical of the diversity of Catholic opinion regarding gay Catholics.  I'm embarrassed that I jumped on that bandwagon myself, so many times.

Now that I'm alone, I have no need to engage on this subject, nothing to prove to anyone.  No one to answer to save Christ. With a heart full of gratitude, I thank our Lord for his grace, his fidelity and his mercy over the years.  He is the one who sanctifies and saves - unmerited by me.  When we cooperate with God's grace which comes to us in Jesus, whose power at work in us can do infinitely more than we can ask or imagine.  We know that all things work for good for those who love God, who are called according to his purpose.