July 7 is the First Day of the Novena to Our Lady of Mt. Carmel 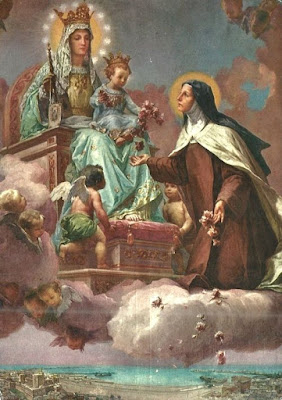 O most beautiful Flower of Carmel,
Fruitful Vine, Splendour of Heaven,
Holy and singular,
Blessed Mother of the Son of God,
Immaculate Virgin,
assist me this my necessity.
O Star of the Sea,
help me and show me you are my Mother.

O Holy Mary, Mother of God, Queen of Heaven and Earth,
I humbly beseech you from the bottom of my heart,
to help me in this necessity;
there are none that can withstand your power.
O, show me you are my Mother,
O Mary, conceived without sin,
pray for us who have recourse to thee.
Sweet Mother, I place this cause in your hands.

St. Therese, intercede for us.

Let's pray for one another to become holy.

I am especially asking Our Lady to undo all the knots caused by my sins and infidelities and defects of character, which have scandalized so many people in my life.
Posted by Terry Nelson at 12:25 PM 6 comments:

Email ThisBlogThis!Share to TwitterShare to FacebookShare to Pinterest
Labels: 1st Day of the Novena

Consecrated Virgins should probably visit a doctor to determine if they are still a virgin ... 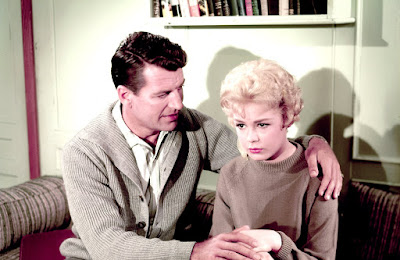 You are going to have to see the doctor first,
because the order of widows won't touch you
and we're pretty sure you're a used woman.


Would that Dr. Peters and Fr. Z had any say in it.

Distinguished canonist Ed Peters has taken a look at the new document from the Holy See about consecrated virginity. I’ve only briefly perused it and not yet commented. However, in a nutshell he states a problem with it that I noticed. It’s sort of a big one.

Ecclesiae Sponsae Imago punts on one problem, fixes a second, but greatly worsens a third
With papal approval the Roman dicastery in charge of consecrated life has just published an important document on consecrated virginity, Ecclesiae Sponsae Imago. Now, according to the plain terms of ESI, the Blessed Virgin Mary, archetype of virginity consecrated to God, would not be eligible for admission to the order of virgins, but Mary Magdalene, model for women who, Deo gratias, set aside a promiscuous life, would be eligible.
Something, I suggest, is seriously wrong with such norms.- Fr. Z


I dunno.  Women in pants and all.  How can they be admitted?

So anyway, a wonderful Servant of God, Archbishop Luis M. Martinez understood the mercy of God very well when he taught, "The Blood of Jesus makes fallen souls virginal."  This is what the teachers of the law seem not to understand.  Although it's Canon Peters job to make these distinctions, but he's just one canonist with an opinion.

That said, some Third Orders permit private vows and recognize secular consecrated life.  Likewise, there is nothing to stop a person from consecrating their virginity - lost or regained in the sacrament of penance - privately and without any worldly recognition, wedding ceremony, or ecclesial title.  Saints have done this for centuries. 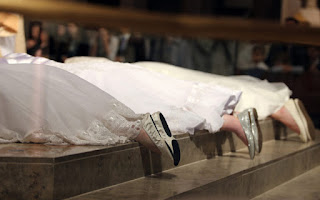 The Mass itself is made soft and effeminate – neither masculine nor feminine. - A. Esolen 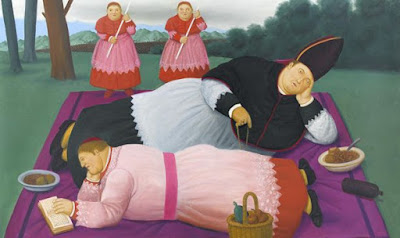 So anyway, one would think these guys would be able to point out the origins of the problem - but they won't do it - because Esolen needs to keep his job.  It's also more convenient to blame the homosexuals and the 'queering' of the Church.  It is a problem of course, but it isn't the only problem...

Yesterday I came across a post shared by Janet Smith on modesty in dress for Mass.  Dr. Smith posted this image she shared from another FB page: 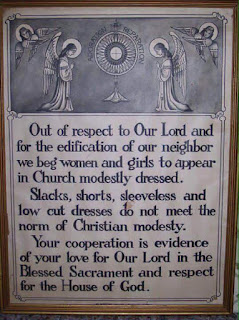 Subsequent comments were interesting, and in the defense of pants for women.  I love posts like that - especially in contrast with posts such as Fr. Z's and Esolen's.  Among other women responders, Rachel Lu also commented on Janet's post:

Rachel Lu I normally prefer for women to wear skirts and dresses to Mass (which is what I myself generally do) but not because slacks are *immodest*. They are not. And I think they should get a pass sometimes for non-Sunday Masses and maybe on very cold winter days.

Other's said they never knew anyone considered pants to be immodest.

Like I said, I love it when these discussions arise online.  On one level because people pay too much attention to what other people wear to Mass - if you live in really big cities, no one cares or notices, because those in attendance can be so diverse.  Small town minded folk pay a great deal of attention, and it's annoying to encounter them.  That said - 'who am I to judge?'  Better yet - 'who are they?'  I digress.

Can pants be immodest?  Yep.  But there is another problem, maybe more serious and culture changing and directly related to the pansification of Catholic men.  Two birds with one shot takes down both arguments.  Women want to wear pants, women and men want a masculine clergy and liturgy, women want a greater role and influence in the Church.  Women want what men are having...

Not that there is anything wrong with that.

Or is there?  Because everyone bitches about it.  Trads and academics lament the gays and the limitations placed upon women who insist upon dressing and acting like men.  (And I laugh!)  It's true though - which is why I enjoy jumping on this subject with Cardinal Siri's notice against women wearing pants - or dressing like men.  It seems more relevant today than ever when men's fashions are changing and becoming more effeminate than ever.

Women wearing men’s clothing tends to corrupt the relations between the sexes.

Cardinal Siri spoke out against it before the pill was introduced, before abortion was legalized, before 'no-fault' divorce, and so on.  And way before LGBTQ rights.  Remember the time Professor?  "Do you remember a time, readers, when you could spend a whole day, actually a whole month, occasionally even a year, and not give one passing thought to the issue of sexual perversions?"

Can't have it both ways - or can you?

Just saying.  I do enjoy throwing it back at 'them'.  I mean, what are they going to do about it?  How, what do they think these laments accomplish?  Was Cardinal Siri a prophet?  Trads think he should have been pope - others think he was pope - and haven't had one since.  (And I laugh!)  Seriously, what is blame game?  What does it accomplish?  Why such lamentation?

So let's review the Siri notice, and then explain why you think the Liturgy and the priesthood is so effeminate while the women in our lives wear (the) pants?  (And I laugh!) 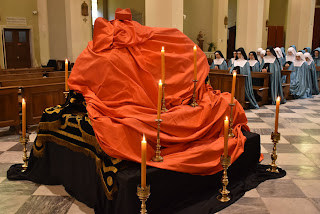 Cardinal Siri.In 1960 Cardinal Siri advised the clergy and faithful of Genoa regarding immodest fashions for women, including wearing men's clothing - trousers.  In view of these adaptations assumed by women and how they dress, is it any wonder that gender ideology has emerged as a result?  Or transvestism by gays and lesbians?  Or the fact that women let themselves go and become morbidly obese - much like Burgermeisters of old?


I. The first signs of the collapse of civilization is the use of men’s clothing by women and girls, even mothers of families.

First, with regard to covering the female body, the wearing of men’s trousers cannot be said to constitute in itself a grave offense against modesty, because trousers certainly cover more of a woman’s body than do modern skirts.

Second, for clothing to be modest, however, it must not only cover the body but also should not cling too tightly to the body. It is certain that some women’s clothing today fits more closely to the body than trousers, but the latter can also be tight fitting – and in fact generally are so. Therefore, wearing such tight fitting clothing causes us no less concern than exposing the body. Thus it is that the immodesty of men’s trousers on women is one aspect of the problem that must not be left out of a general judgment on the topic, even if it should also not be artificially exaggerated.

II. There is, however, another aspect of women wearing trousers that seems much graver to us.

The wearing of men’s dress by women primarily affects the woman herself, first by changing the feminine psychology proper to women. Second, it affects the woman as the wife of her husband by tending to corrupt the relations between the sexes.Third, the woman as the mother of her children loses dignity in the children’s eyes. Each of these points should be carefully considered.

Email ThisBlogThis!Share to TwitterShare to FacebookShare to Pinterest
Labels: I blame the women, Let them wear pants, Post July 4th musings, Pushing all the buttons at once, They equate mercy with effeminacy 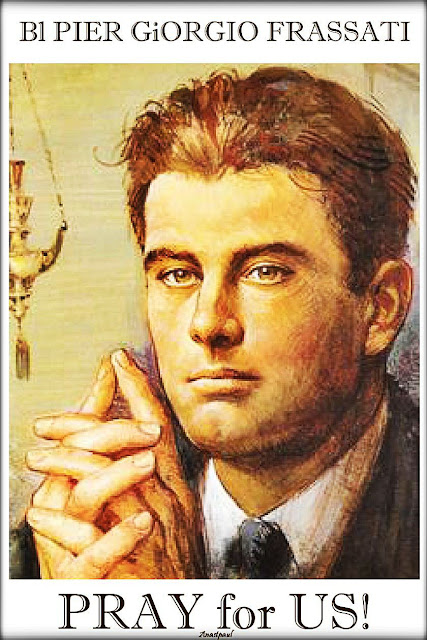 Today is the feast day of Blessed Pier Giorgio. 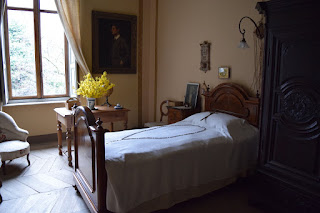 Pier Giorgio's bedroom at the family home in Pallone.
Posted by Terry Nelson at 11:55 AM 3 comments: 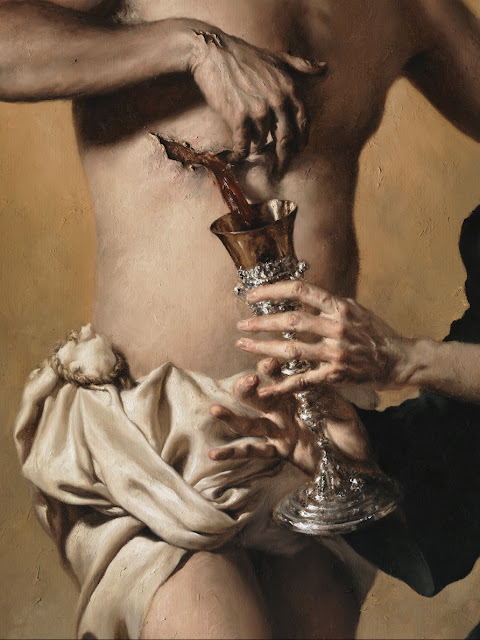 
Blood of Christ, save us!


July is devoted to the Most Precious Blood of Jesus.

"In Christ's blood we are made strong, even though weakness persists in our sensuality ... since our reason is made strong in Christ's blood, we must drown ourselves in this sweet glorious ransom." - S. Catherine of Siena


That flood pours into our souls in and through the sacraments - especially the sacrament of penance.  In the Eucharist we are inebriated in it ... "and in that blood we are freed from our weakness."
Posted by Terry Nelson at 11:06 AM 5 comments:

Email ThisBlogThis!Share to TwitterShare to FacebookShare to Pinterest
Labels: Devotion to the Precious Blood, Do not be afraid-just have faith
Newer Posts Older Posts Home
Subscribe to: Posts (Atom)