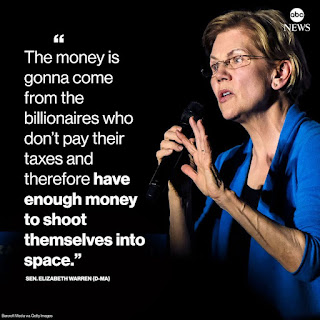 "She is the most annoying woman in the US. I wish someone would shoot her into space."
FB wouldn't allow the comment, albeit the meme from ABC News says the exact same thing:  Warren says billionaires 'have enough money to shoot themselves into space.'  She says 'shoot' - 'into space'.  Yet my casual remark doesn't follow their Community Standards?
So nuts.  AI will destroy us.