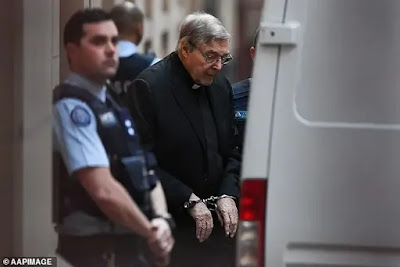 Cardinal George Pell has reportedly been moved
from his central prison in Melbourne
to a high-security facility in regional Victoria
after a drone had flown over the prison. - Source

This is sad.  I believe Pell is innocent.  He's being moved because they don't want him photographed.  The conditions in the new prison are supposed to be pretty bad.

"Cardinal Pell knew from hard personal experience how virulent the anti-Catholic atmosphere in Australia had become. As a member of the College of Cardinals and a senior Vatican official, Pell enjoyed Vatican citizenship and held a Vatican diplomatic passport; he could have stayed put, untouchable by the Australian authorities. Yet he freely decided to submit himself to his country’s criminal justice system. He knew he was innocent; he was determined to defend his honor and that of the Church; and he believed in the rectitude of the Australian courts. So he went home." - George Weigel