Revisiting Eve Tushnet and her message for gay Catholics. 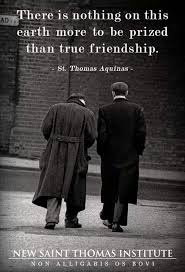 "Sometimes it happens that you feel disappointed, discouraged, abandoned by all: but God does not forget his children, he never abandons them! He is always at our side, especially in trying times." - Pope Francis, 03/2015

I've come a long way, yet I have not veered off the narrow way of Catholic teaching - which BTW, can be manipulated and used to drive people away from the Church.  To understand what I mean by that, one needs to listen to and read what Pope Francis has taught since he became Pope.  His cautions against rigidity and ideologues, and so on.

Years ago I was caught up in some of the interpreters of Catholic teaching as concerned gay-ssa Catholics, and I attempted to make sure I conformed perfectly to what they told me.  I had already adopted the Courage model of life, thinking I was just fine.  Except I couldn't say gay, wasn't supposed to live with a male friend with whom I had been sexually active, until we agreed - mutually - to live a chaste and celibate lifestyle in accord with Catholic teaching.  Our friendship only deepened.  I've written about it openly since my friend died.  He never wanted me to discuss our friendship publicly while he was alive, and especially when he was still employed.  (He was a designer, working in an industry populated with gay coworkers and friends.  The Catholic stuff isn't appreciated in that milieu.)

Long story short, I regret taking sides in the debates and infighting between gay-Catholics and SSA-Catholics, Spiritual Friendship advocates, including Eve Tushnet's work in the field and those who think they are trying to undermine Catholic teaching.  All along, I could have been 'friends' with most of them - their POV is Catholic - in fact, probably more Catholic than what Fr. James Martin, SJ sometimes seems to be saying. (He's Catholic.)

That said, America published a decent interview with Tushnet, which people still struggling with Catholic teaching and the dreaded idea of 'conversion therapy' really must read.  The title of the article is: "The church has models of non-sexual same-sex love. Why don’t more gay Catholics know about them?"

I'll highlight a couple things, with or without commentary, pretty much stuff I've discerned for myself.  One needs to remember that 'everything is grace' we have only to cooperate with it.  When we fall or fail, we get up and keep going.  To get old and look back - I'm stunned what the Lord has done in my life, even though I always got in the way, or was misled by a few fanatical voices from time to time.

One of the things that I realized as I began talking to people who had had this experience of formal therapy to change their orientation was how much of it resonated with stuff I and other gay Catholics who had never tried therapy or counseling of any kind has heard. The underlying assumptions are pretty widespread in Catholic circles. And they include things like the idea that people become gay because of negative experiences, especially in childhood. So, if you didn’t get along with other boys or other girls that may have alienated you from them, and later you become gay, or you have a bad relationship with your parent of the same sex. There’s a bunch of different theories that people put forward.

I think that idea of the origin story is one of the biggest ones because it gives an explanation of how therapy could help, how the fixing might work.

But there’s a deeper underlying assumption, which is that the experience of being gay is purely negative and that there’s nothing that experience can teach you about yourself. There’s no gift that it can offer to you or to the church. If you do therapy and it works for you, you will kind of dissolve into the straight majority. And any gay feelings or experiences you had before, that can be sort of pushed to one side, leaving no trace in what it means for you to be Catholic or your experience of God.

When a gay Catholic goes through conversion therapy, what are they being told about themselves and what are kind of the dangerous effects that that can have on their self-worth?

One of the things that several of my interviewees said was that part of the power of the conversion therapy narrative is that it often it draws on real experiences that lots of people have had. [But] not everybody. I would not say that I felt particularly in conflict with other girls. I have a good relationship with my parents, but as it happens, lots of people of all sexual orientations have troubled relationship with their parents or with their same-sex peers.

People are told some stuff that often can resonate because it’s drawing on common experiences and one interviewee even pointed out that you can argue that for some people, it’s the timeline that is backward. You began to realize that you’re different from other boys or that you’re different from the model that your parents want for you, and that is what causes the conflict. But the conversion therapy model explains that the conflict is what causes the gayness. And so people hear that and they’re like, well, I do have both of those things. That kind of reinforces an idea of themselves as essentially lacking and the conflicts that they have are unique to them because they’re part of this stigmatized group, which they’re often pressured by their therapist to keep secret. It becomes a focus of a deep feeling of inadequacy.

What happens then? So you’ve done all these things and you’re still “broken.” Where does that leave a person?

Several people said basically the same thing, which was: “I tried all these things. I went to therapy. I dated somebody of the opposite sex. I pursued a religious vocation. I tried developing stronger bonds with people of the same sex, maybe that would help. And like, none of it made me any different in my sexual orientation. I’ve tried everything.” And at that point, people either fall into complete despair and contemplate suicide often, or they kind of give up in the other direction. They’re like, well, whatever is right for me, it’s not going to be what these people are telling me. - Eve Tushnet

The entire article is well worth the read.  One must remain open and in conversation with those who may have different approaches to following Christ, striving to live in accord with the Gospel and Catholic teaching.  Never sell yourself short or allow others shame you.