Just a thought on what 'may have' happened to Fr. Z 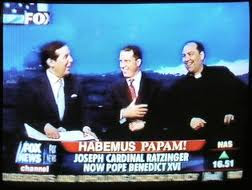 Fr. Z relocating.
Those who know of Fr. Z now know he is relocating, a priest without an assignment in search of bishop to sponsor him, as it were.  A link to that story:

"A prominent priest-blogger Fr John Zuhlsdorf who performed exorcisms against “fraud” in the United States presidential election is leaving his diocese.

The priest, who runs the popular “Fr Z blog”, has been living in the Diocese of Madison, in Wisconsin, although he was ordained for the Diocese of Velletri-Segni, near Rome.
News of his departure from Madison comes after The Tablet reported that Fr Zuhlsdorf had been carrying out live-streamed daily exorcisms against possible electoral fraud. In at least one instance, the priest claimed he had the authority of Madison’s bishop, Donald Hying, to perform the exorcisms, something the bishop denied." - The Tablet

So, there is lots of speculation as to why, where did he go wrong?  What will he do?  All I can say is thank God he didn't become corrupt or fall into any sort of moral scandal.  Though his political discourse is totally alt-right, his disenchantment with Vatican II, the Ordinary Form of Mass and love of the EF Form pulled him closer and closer to the rad trad, anti-Francis faction in the Church.  He blasted people like Fr. James Martin out of the water, so to speak.  Celebrated excommunications of liberal priests and was downright vindictive in his condemnation of liberal nuns and anyone who came out in favor of women deacons.  He ran his own version of cancel culture on his blog, calling for boycotts of Catholic journals, letters to the Vatican and nuncio, and so on.  Now he's on his own and protesting the 'cancel culture' which celebrates this setback in his career-vocation.
Some well meaning people seem to agree with the idea that Fr. Z's enemies were on a campaign to silence him and seek his downfall because he is a 'good guy', faithful and true.  I think he really is a good priest.  What has happened will turn out for his good, I think.
He started out well, he began writing for Catholic journals, and then engaged in an online apostolate which was effective in catechizing Catholics on liturgical matters and Catholic teaching.   I just think, whatever his apostolic intent, early successes may have led to a bit of presumption, sparking an ambition for fame and a drive for promotion.
He had a brief stint as a commentator on Fox News during the transition from JPII to Benedict XVI,  and that bit of stardom might have awakened a greater desire for media fame - it wouldn't be unthinkable it aroused his ambition for recognition and esteem.  After all, he had credentials of working in the Vatican, reporting to important figures, running into Ratzinger, rubbing shoulders with journalists and influential clergy, and definitely prided himself as being in the know with all the court gossip, etc.. His work there allowed him to assume a certain level of status and influence. Then the immense success of the blog and the revenue it generated really propelled him, I think.
I recall him almost bragging to a UK priest on how much money his Donate app made.  In one blog post, he urged the priest to get one and even offered his own donations as a fund-raiser incentive for the priest. I'm no longer able to find those posts, nor my commentary on them, but they existed at one time.  If I'm wrong, I'll retract.  He prized stats and links to his posts, and delighted in the growing number of his followers - restricting critics and those who sought to dispute with him.  In his hey day, he was posting photos of the frequent UPS deliveries he received, in between posts on the feeder feed, along with travelogue photos and visuals of fine dining trips. It was entertaining - and profitable - and his fans loved it - and I have to imagine his ego expanded accordingly.  He obviously felt called to support the Trump administration - for God and Country.  And then, just like that, it suddenly became too much.
In conclusion, that's what I think happened to the public figure of Fr. Z.  God bless him and this new chapter in his life.
Posted by Terry Nelson at 6:01 PM 18 comments: