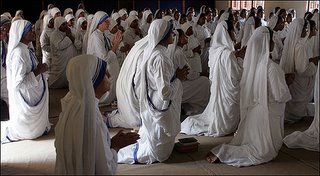 Missionaries of Charity of Blessed Mother Teresa of Calcutta.

I had an incident one day a month or so ago in the Store I work in. It made me do a lot of thinking. The Missionaries of Charity came in to see me. Every time they visit the Store I feel like I'm seeing Mother. Sometimes I even lapse and call them Mother instead of Sister. No offense to any other religious order but these nuns are exceptional examples of the religious life; they remain just as faithful to radical poverty and their original charism as when they were founded. They are women of prayer as evidenced by the rosary they carry in their hands and are actively praying as you meet them - their rosaries do not just hang on their belts.

When you encounter the sisters you cannot help but tangibly feel their charity. I love them. They had to talk to me about a mistake we made in our catalog. It concerns one of those latex wrist bands, a JPII memorial item, a piece of "I could care less merchandise" that is over-priced as well as a post-peak trend item. A seemingly insignificant item. In our catalog copy, that we took from the vendor we bought it from - I must hasten to say - it states that "a percentage of the proceeds from sales of this item go to the Missionaries of Charity." Mother Marcella, the provincial in the U.S. contacted me a few months ago that this was in error. I was totally unaware of the copy and promotion. I assured her I would look into it. I explained I had no knowledge of the connection and told her I knew very well that the Missionaries and Mother have always had a prohibition against fund raising. I knew that! I assumed everyone did. I told management and explained how important the matter is, they seemed to understand. And guess what happened? Another re-mail catalog had already gone to press and was subsequently mailed out. You can imagine the embarrassment for me and the Company when Sister came in and talked to me about the same mistake that had not been taken care of. I explained as best I could, I said I would take care of it for them and I apologized. I went immediately to the Owner of the Company and explained to him the problem. I called the Company we buy the items from and explained the situation. He explained that he had bought the business from another fellow and he was the one who promoted the item that way and he simply continued it. As I spoke to him on the phone he removed the line from his web site. I knew it was going to be taken care of. (And it was - immediately.)

The entire episode gave me pause however. The Missionaries themselves always remind me of the parable of the goats and sheep being judged at the end of time, because they are so hidden and humble and also because Mother often referenced this parable. (I shuddered because of what scripture says in regard to merchants and how they will be judged!) What struck me about this Gospel however is how the people to the right hand of our Lord, those who have done well, question Jesus saying, "When did we see you hungry and give you food? Naked and we clothed you?" and so on. They honestly did not know until Jesus told them that when they did this to the least among them that they did it to Him. The blessed were totally unaware of their good works - they were simply acting from the goodness of their hearts. They neither measured nor tallied their good works - they simply were acting and doing what was right, the right hand not knowing what the left was doing‌.

It is human nature to take an account of possessions, money, honors, etc. We deduct our charitable contributions from our taxes. (In our Store we even sell "Sacrifice Beads" a pious custom adopted from the life of Therese of Lisieux, you're supposed to count your sacrifices throughout the day by moving a bead every time you do a good work. Unless you are about five years old, as Therese was when she used it, I'd strongly recommend not using such a device. (It's for training kids - not for adults.)

We often carry this accounting practice into our spiritual lives. Many who practice prayer like to figure out what stage of prayer they are at. In my Store we carry a book called "The Stages of Prayer" written by an former Discalced Carmelite nun, it more or less 'retarded' my own progress in prayer since it focused so much on stages and levels of prayer - it isn't the best study on the practice of prayer. Teresa of Avila's famous book, "The Interior Castle"‌ documents the various stages of prayer as well. This is great for directors or to inspire a person to strive for the higher gifts, but it's a waste of time, in my opinion, to use it to try and figure out where you are at in the spiritual life. You're just measuring again. You're keeping score of your virtue - similar to what an overly solicitous parent does in regard to their kids sports activities or academic life. Jesus said not to let your right hand know what your left hand is doing and to keep your works of mercy secret. In other words forget your self and mortify your self seeking. Love and act out of love, "Love and do what you will" as St. Augustine wrote. We should neither count the cost nor the accomplishments of our charity - or prayer for that matter. We might take it a step further, maybe we should not use other people's charitable mission or accomplishments to raise funds or make a sale. If we are going to do an act of charity, we ought to do it in the name of Jesus, for Jesus, and let Him alone know we are doing it. Don't try to make a profit off the backs of the poor.

Remember the Pharisee and the Publican, the one guy recounted to God all of his merits and good deeds, he tithed, gave to the poor, he did a lot of good. (What if he was one of those who traipsed by that other guy laying on the side of the road that the Samaritan helped?) But the one who was justified was the Publican - who had nothing but his sins. At the end of her life St. Therese proclaimed she went to God "empty handed“ not unlike the Publican.

I think that is how the Missionaries of Charity think of themselves as well. Yeah, they never take account of what they do, they simply follow Jesus.

(We eventually got rid of the phrase in our catalog. The Missionaries were happy and hopefully we learned a good lesson.)
Posted by Terry Nelson at 6:59 PM No comments: