Monsignor with a great deal of influence. 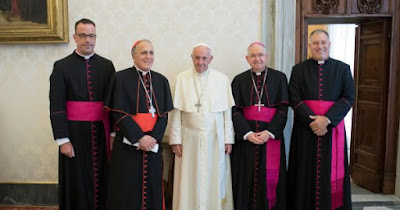 For me, this story is similar to the McCarrick scandal - except it doesn't involve minors.  As General Secretary, Burrill had a great deal of influence at the USCCB.  He was the man in charge of sexual abuse policy.

"In 2018, the priest was a member of the USCCB’s executive staff and charged with oversight of the conference’s pastoral departments. He and several senior USCCB officials met with Pope Francis Oct. 8, 2018, to discuss how the conference was responding to ecclesiastical scandals related to sexual misconduct, duplicity, and clerical cover-ups.

Data app signals suggest he was at the same time engaged in serial and illicit sexual activity.

On June 20, 2018, the day the McCarrick revelations became public, the mobile device correlated to Burrill emitted hookup app signals at the USCCB staff residence, and from a street in a residential Washington neighborhood. He traveled to Las Vegas shortly thereafter, data records show.

On June 22, the mobile device correlated to Burrill emitted signals from Entourage, which bills itself as Las Vegas’ “gay bathhouse.”" - The Pillar

Burrill's use of Grindr, visits to baths and bars, is pretty gay.

It's not like a sort of accidental fall from grace, or a 'slip up' in behavior.  It signals a kind of hardcore activity involving gay encounters and familiarity with the active, gay social milieu.  From what I've read, Grindr is comprised of sexually explicit material.  Years ago, gay newspapers used to have personals columns, along with ads for bars and bathhouse, as well as massage, to facilitate hookups.  Today there is social media.  It takes guts to get involved with people for sex in that way.  The first time one does stuff like that is a bit intimidating.  After practise it gets easier, if you will.  If the app evidence is true, Burrill was seasoned and well practised.

Having said that, what I'm suggesting is that The Pillar story did not out Burrill, since he is obviously gay.  What the article did do is reveal what is essentially public behavior, albeit clandestine.  Burrill is a public figure, morally compromised and corrupt.  He's a high ranking official in the American Church, responsible for how the Church handle sexual abuse cases and discipline for offender.  It wouldn't be a stretch to bring into question his attitude towards gays in the priesthood, his influence over seminarians and any cover up of a homosexual culture in the priesthood.

So many questions pop up - for instance, we still have never received the full report on McCarrick.

Lulled to believe gay is a neutral condition.

Or a third way, which 'if one seeks God' one should not judge.  If we are 'building a bridge' to LGBTQ persons estranged from the Church, those offended that the Church teaches the inclination itself is towards an objective disorder, one ought to let go of any attitude which can be interpreted as homophobic.  Hence, many ordinary Catholics, especially those who embrace Catholic teaching and strive to live chaste, celibate lives, are very careful not to judge, much less identify persons by their sexual preference or proclivities.  Bishops and priests, in a position of power and influence - even at the Vatican - can offer an impression of pastoral care and accompaniment, while privately, that accompaniment entails evangelizing on Grindr, at bathhouses in Vegas, and gay bars around town.

Upon hearing the news of Burrill's resignation, I too jumped to the conclusion that he was unfairly outed and he lost his job due to this invasion of his privacy.  Gradually - I woke up.  The influence this particular monsignor had warranted the report.  He chose to resign and so far hasn't been heard from. The greatest danger his active homosexuality posed is how he may have influenced the Catholic response to gay issues within the clergy and how gay people are treated in the Church.  Is it because of influencers like Burrill that Courage Apostolate is often ignored and bishops prefer Fr. Martin's way of evangelizing?

As a gay Catholic - living in accord with Catholic teaching - I get it that gay people are protective of one another.  I respect a lot of gay Catholics who oppose the language in Catholic teaching.  I am sympathetic to their claims of homophobia, despite the fact they can look down on people who promote Courage, including those who accept, defend and witness to Catholic teaching on sexuality and marriage.  Yet, that's not called homophobia in their literature.  My point is, gay priests and bishops, just like all of us, protect their confreres.  They protest when their secrets are found out.  They cover for them and frequently demonize the messengers.

I have maintained that The Pillar did nothing wrong.

They alerted the USCCB about their findings and then they published.  It happens all of the time in politics and Church news sources.  If not there - on social media.  There are private citizens, parishioners, coworkers who research the moral lives of bishops, priests and laity.  I've had people search my records, I know people checked public records to see if I was married.  It was only a matter of time that Msgr. Burrill's activity was revealed.  I'm sure a Catholic tabloid like Church Militant is pissed they didn't break the story.  The truth does come out - 'nothing is hidden that will not be revealed.'  To be morally outraged that two guys with a news site published the story is in itself an extension of the same mindset which guided the bishops to cover up the abuse scandal.

The fact the Burrill's private life never included sex with minors, but was consensual between adults, means he didn't commit a crime.  He failed to remain chaste and sinned.  We all sin.  Therefore it will probably get swept under the rug - which is unfortunate, because it is immoral behavior and an indication of deeper corruption.  Catholic teaching is compromised.