Madonna at the Basilica 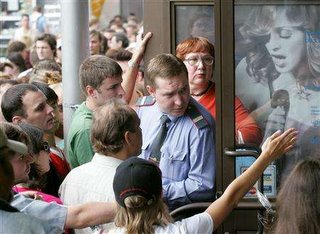 At least the Basilica of St. Mary in Minneapolis is not the only Catholic church criticized for their controversial fund raising projects. (The Basilica holds an annual "Block Party" in front of the Church with rock bands, along with food and alcohol for sale. It started when raising funds to renovate the church and has been criticized by conservative Catholics every year since.)

In Milano, as seen in this photo, Madonna's image graces the scaffolding surrounding the Duomo which is being rennovated. A common practice is to sell, or rent the exterior space provided by the scaffold to advertisers. In this case it is a fashion house using Madonna's image to sell their product. It's creating quite a rucous in view of Madonna's latest blasphemous concert in Rome near the Vatican. When you need money, you need money I suppose. Here is the story:

"MILAN (Reuters) - Is it appropriate for one of the Roman Catholic church's best known cathedrals to be draped with the giant picture of a pop artist who has made millions from hit songs about sex?

Yes, according to the most senior priest at Milan's landmark Duomo who has rebuffed requests to remove a picture of Madonna as part of an advertisement for Swedish fashion chain Hennes & Maritz." [snip] Read more:
Posted by Terry Nelson at 9:27 AM 7 comments: