Some people think he is a saint... 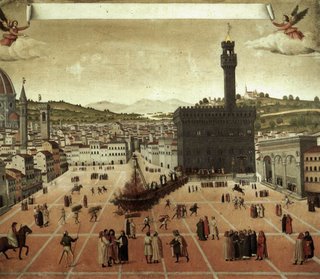 Pictured; The Execution of Savonarola.


Indeed, his cause for cannonization is currently under study. From Zenit archives, an interview with the Postulator of the cause:

"But is he a Saint? To get more information on the figure of Savonarola, ZENIT interviewed Fr. Innocenzo Venchi, O.P., who is in charge of studying and promoting the cause his beatification.

Fr. Venchi: Savonarola returns to view because we feel the need for precision in historical reality. He was the victim of calumny and was poorly understood. We must illuminate the truth so that the spiritual figure, the virtuous man, the saint emerges. The questions on which we must clearly respond are his obedience to the Pope (Savonarola never disobeyed him), the excommunication and its validity (This is a very controversial question), and his political influence (which was probably the cause of his condemnation to death). On the basis of all the proofs and counterproofs that I have seen, I can affirm that the previous questions can be resolved in a more than sufficient manner.

ZENIT: In the collective imagination, Savonarola is remembered as a fanatic preacher against feminine vanity, a severe moralist who burned Botticelli's paintings simply because nude women appeared in them.

Fr. Venchi: Savonarola was a morally integral person. He was honest and coherent, and his life corresponded to what he preached. He was severe, but we must also consider the reality of the times in which he lived. Faced with rising neopaganism, the decadency of customs in Rome and Florence, it was enough to ask that people follow the Gospel to be branded as severe censors. Savonarola, nonetheless, loved Florence -- you can see this in his preaching; he felt a great tenderness for that city. If you can make the comparison, Savonarola wept over Florence just as Christ wept over Jerusalem. He was rigorous, but at the same time balanced, not fanatic. This is evident in a few of the questions in which he took action. He intervened before the Republic of Lucca to find a reasonable solution on behalf of the Jews. As for women, Savonarola held them in great consideration. In a period when prostitution reigned and women had no self-esteem, he proposed to allow them to participate in the guidance of civil life in the city. He even wrote a book on the life of widows. He showed maternal tenderness for children.

ZENIT: And how do you explain the "House of Vanities" that he organized?
Fr. Venchi: A great deal of uproar has been caused and many falsehoods written about the "House of Vanities" where they burned jewelry and paintings disrespectful of morality, but this had already been put into practice by St. Bernardine of Siena and Blessed Bernardine of Feltre. They were not Savonarola's invention. They say that he didn't like painting because he had Botticelli's paintings with nude women burned, but very few know that Bartholomeo della Porta, Raphael's master, was a disciple and follower of Savonarola. After meeting Savonarola, Br. Bartolomeo began to paint religious themes. It is well known that Michaelangelo admired Savonarola, and it appears that Raphael did as well, since the great painter put him in the "Dispute of the Blessed Sacrament." Another follower of Savonarola was the painter Paolino Detti, better known as Paolino del Signoraccio. So, he had many artists among his followers.

ZENIT: It seems clear that an injustice was committed against Savonarola, but was he really a saint?

Fr. Venchi: The cause was born from the fact that despite the calumnies and condemnations, the cult and veneration of Savonarola has continued across the centuries into our time. Among his admirers we find dozens of saints, such as St. Philip Neri, St. Catherine of Ricci, St. John Fisher, St. Pius V, and St. Pius X. Even in modern times, we find great admirers of Savonarola, such as Blessed Pier Giorgio Frassati, Blessed Don Orione, and the Servant of God Giorgio La Pira. In addition, as the investigation has progressed, the more we came to know his writings and historical successes, the more we esteemed Savonarola, even if he will always be a sign of contradiction due to his strongly held positions.

ZENIT: Can someone who criticized the life of the clergy so be beatified?

Fr. Venchi: Important historical studies prove that not only was Savonarola not disobedient, he was neither excommunicated nor insane. Some hold that if Savonarola had been listened to, perhaps there would not have been a Reformation. While at that time no one would raise his voice against the reigning corruption, Savonarola made himself heard, preached against the bad customs, denounced the dissolution of his times, had the courage to speak to the end, was coherent, never gave up, never bent even before the threat of death, and paid with his own life.

ZENIT: Then for you, Savonarola is a saint, with all that that would imply?

Fr. Venchi: The sanctity of Savonarola is shown in the moment of his condemnation, when as a prisoner, he was tortured, humiliated, and made fun of for forty-five days, and then killed and burned. In that difficult moment, he had the strength to write a commentary on the Miserere [Psalm 51], which is one of the most beautiful in the history of the Church. This is the comportment of a saint. In a certain sense, he walked the Passion of Jesus Christ again: he was betrayed, imprisoned, tried, abandoned by all, and stripped of his habit. He suffered all these humiliations without bitterness toward anyone, and never disobeyed the Pope." [snip]

It makes you really wonder about Fr. Altier doesn't it? What if...

I mean, he has preached against the evils of rock music, the vanities of our times, the immorality of television. He says Harry Potter is wicked. He talks about the end of the age, the corruption in the Church. He spoke out against the "VIRTUS" sex-ed program for Catholic schools. He is no fan of contemporary immodest fashions. He has said a lot of things that kinda, sorta sound like Savonarola. I know some people who are devoted to him who even have had book burnings - I don't know if Father condoned that however - I'm sure he would see no harm in it. Oh well, at least we don't imprison or burn people at the stake any longer.

(I couldn't sleep so I thought I'd post this as a follow up to my other post on Savonarola - after rumaging around the net looking for his meditations on the Miserere.)
Posted by Terry Nelson at 11:23 PM No comments: