Breaking silence for a moment - a sort of 'bookmark' for later reference. 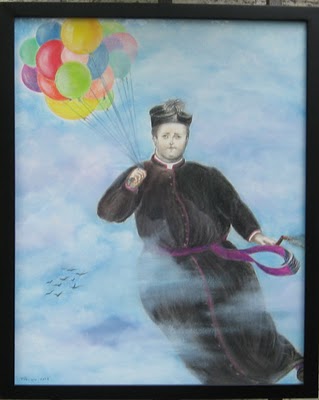 He's dedicated an entire post on 'The question of two popes..." shamelessly questioning the validity of Pope Benedict and subsequently the election of Pope Francis. He deals with it as a response to his followers who have posed challenges and doubts - as well as fears. He presents his theories as a sort of mind exercise to help an already confused group of faithful, sort things out. It's a clericalist parlor game, one might expect to be engaged in while attending some stuffy-old monsignor's dinner party, seated around the the dining table, engaging in after-dinner conversation, as they sip their drinks and chew on their cigars.

Fr. Z is undoubtedly an admirer of Ann Barnhardt, referencing her posts on several occasions.  The woman thinks Francis is an anti-pope and says horrible things about the bishops and clergy - she makes Voris and Niles look like legitimate journalists. If he reads her, he knows all that.  He also must be well acquainted with Taylor Marshall, since he mentions Ed Mazza in conjunction with Barnhardt. Mazza is author of the theory that Pope Benedict XVI may still be Pope with Francis just Bishop of Rome. More or less.
Ironically, those who reject Francis as Pope strike me as the real ultramontanists - a term some use for those who support Pope Francis.
Among these people, who no doubt hold the Archbishop Vigano crackpottery in high esteem, we can now locate Fr. Z. What a crazy assortment of misfit characters that group has become. Trads are not just traditionalists, I think they are fast becoming Tridentinists - if they are not already. Reject Vatican II and the Franciscan papacy and Magisterium, what are they? Perhaps Fr. Z hasn't sold his soul to all of that just yet - but it could happen if he keeps playing games like this.

Let’s play the mind exercise out a little more and hack through some of the issues which I have heard raised by, for example, Ann Barnhardt, who is without question of the mind that Benedict is still Pope and Francis is a usurper antipope. Along with Ann is a smart fellow with well-articulated arguments, Edward Mazza.

I’ll try to spin out what they have been discussing. I hope I don’t put my foot wrong and mischaracterize their positions. I’m happy to be corrected. - Fr. Z