The Feast of Stephen.

I should write something - especially after the last post.  I don't know what to write however.  I also don't feel like it.

At one point I stopped really preparing for Christmas.  I sent out some cards, but didn't finish.  I think a lot of people didn't send cards.  Word must have gotten around that Darold died, because he didn't receive any cards.  A couple of his friends were my friends too, and they never even acknowledged his death when I sent them notice, much less responded with a Christmas card.  That was a good lesson for me - I believed they were my friends - but they were simply being polite.  The Imitation of Christ has some things to say about that - which helped me very much.  It is better for me.  It's a lesson I always need repeating - those who flatter you deceive you.  Likewise, it's could to have people recognize our faults and failings, As St. Philip Neri admonished: "He who cannot put up with the loss of his honour, can never make any advance in spiritual things."

There you have it, and I'm quite content to accept my outcast state.

When, in disgrace with fortune and men’s eyes,

I all alone beweep my outcast state,

And trouble deaf heaven with my bootless cries,

And look upon myself and curse my fate,

Wishing me like to one more rich in hope,

Desiring this man’s art and that man’s scope,

With what I most enjoy contented least;

Yet in these thoughts myself almost despising,

Haply I think on thee, and then my state,

(Like to the lark at break of day arising

For thy sweet love remembered such wealth brings

That then I scorn to change my state with kings. - Sonnet 29

In conclusion, one excellent gift has been the reconnecting with my family, especially my sister and nieces and relatives.  For much of my life I thought of friends - many of whom are no longer in touch with me - as family.  While my real family felt alienated without understanding why.  Our Lady Undoer of Knots took care of that!

Email ThisBlogThis!Share to TwitterShare to FacebookShare to Pinterest
Labels: My story 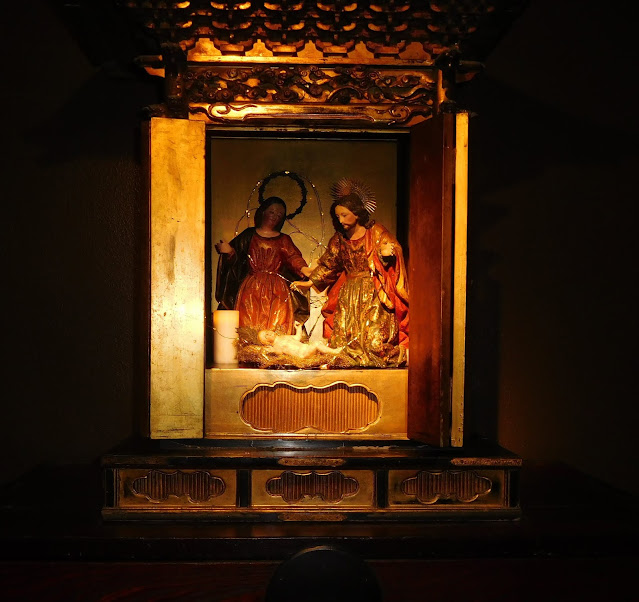 This year's creche.  Spanish Colonial figures in a Shinto shrine.

This is my first Christmas alone since I was a 'pilgrim' living in Boston.  This time it is different of course.

Years ago - many years ago, I spent Christmas kind of alone.  The year I turned eighteen, I had already left home and was living on my own.  Months later, I moved in with my boss, David.  He was the display director at the store, and I was certain I had fallen in love with him.

That first Christmas together was anticipated with parties, a department/office party, a party with designers in the apartment complex we lived, and finally a party with his closest gay friends in his apartment.  That year, I bought David an expensive gold cigarette lighter, he bought me a Tiffany key chain with my initials engraved on it.  I was so touched, because he used the unique initials I always used on my artwork.  A monogram with the stem of the T acting as the vertical bar of the N - a lot of people felt the script appeared as TV.  Ha!  I liked it, and it was the most romantic thing ever.  Trouble was, I didn't know how to act in front of his friends, I was so scared to be around older gay men and professional adults - I had no social skills at all.  (David was twelve years older.)

He was from Duluth originally, and went home for the holidays - if his mother came to Minneapolis, I had to clear out; whenever he went home, I was alone.  All the parties and gift exchange happened before he left. 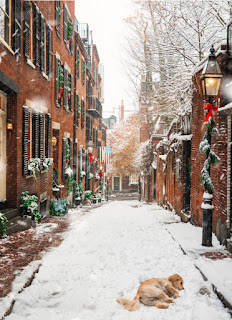 As I mentioned, the next time I spent Christmas alone would have been while I lived in Boston.  After Mass on Christmas Eve, I wandered Beacon Hill, looking into the windows as I passed by apartments and townhomes, admiring the wonderful decorations and families celebrating.  It was like a movie.

This year, it's entirely different - perhaps the most contemplative of my life.  I know, due to the pandemic, many are alone this year as well - so I have nothing to complain about.  Actually, 'symptoms of loneliness and heartache' have never been strange for me - I've learned how to live with such things.

This morning I came across something consoling from Medjugorje.  I'm not a follower of the apparitions, but neither am I so concerned about them as many others seem to be.  If the Holy See isn't worried, neither am I.  That said, and early message is comforting for me this Christmas.


• Not everyone will be be able to enjoy this Christmas at home with loved ones because of travel restrictions imposed to prevent the spread of the coronavirus infection. However, on a more positive note the Medjugorje seer Mirjana Dragicevic-Soldo said in 1983 Our Lady had informed her that many souls are released from Purgatory on All Saints Day, but most souls are taken into Heaven on Christmas Day.

Anyway, that's a consoling thought.  Some people find consolation in the alignment of planets and call it the Christmas star.  Whatever works. This was the MPLS apartment complex I
lived in with David.