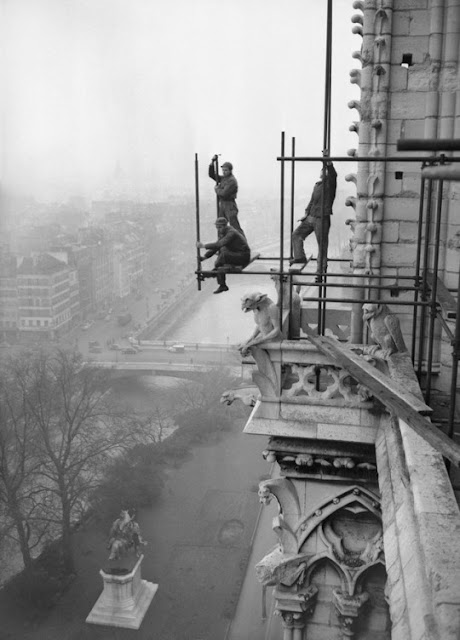 The people of France own the Cathedral - the French Government gives it to the Church to use and maintain.* The will to rebuild a national, indeed a world heritage site comes from the people - Christian and secularists alike. Enemies of the Church accuse the Church of hypocrisy, of exploiting the faithful, raising money to rebuild while ignoring the poor and the immigrants. That is just not true. 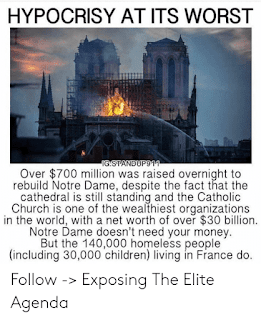 This is the meme posted by an online gay-friend
which occasioned my post.  Gay Pride Month
brings out many anti-Catholic memes.


The Church is the major voice in the world today speaking out against injustice and the exploitation of peoples. The Church is the one supporting the cause of immigrants and refugees seeking asylum. The Church is the one who has always reached out to the poor and the marginalized - since the time of Christ. Catholics provided schools, education and welfare, hospitals - religious pretty much invented hospitals and hospice, religious organized nursing, established orphanages - providing every charity one can think of. (Except killing people through abortion, infanticide, and euthanasia.) The Vatican itself has free clinics and facilities to care for the homeless. Mother Teresa is famous for caring for the poor, the dying, being one of the first to open a hospice for AIDS patients in NYC when the epidemic first started. Her order does no fundraising.

Many Gay people angry at the Church because the Church can't change her teaching on life, gender, sexuality and marriage. For all of their education, they should know better than to spread false information about the restoration of Notre Dame de Paris.

Not a few former Catholics share a similar attitude, "that of the wronged, rejected, 'poor me'" and they blame the institutional Church for all that is wrong in the world. To quote a psychoanalyst writing about a specific group of chronically disgruntled people, I will repeat his analysis here:

"They are therefore easily insulted; they 'collect injustice', as psychiatrist Berger has so well put it, and are liable to see themselves as victims. [...] Attached to self-pity, they are inner (or manifest) complainers, often chronic complainers. Self pity and protest are not far apart. A certain inner (or overt) rebelliousness and hostility to others who do them wrong and to 'society' and a determinate cynicism, are typical of many" of these types. - dr.vda

Of course I could be wrong about the analysis 'of these types' - but not about Notre Dame and the Church. 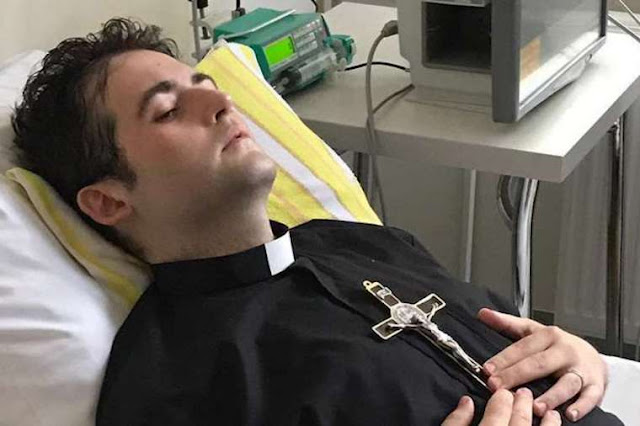 PRAYERS for Father Michael Los who died this morning!

The Polish seminarian suffering w/ terminal cancer was ordained in his hospital bed in May.

On the day he was ordained, he said: “Praised be Jesus Christ! Thank you for all your prayers, and I hope you continue praying. I bless all of you in the name of the Father & the Son & the Holy Spirit."

In thanksgiving for the sacred ministry and holy priesthood of Fr. Michael.   Pray for us sinners, now and at the hour of our death.  Amen.
Posted by Terry Nelson at 12:27 PM 2 comments:

Photoshop and Cheapfake to Deepfake 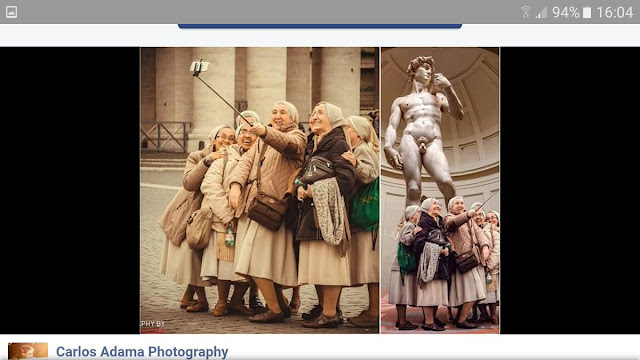 "The party told you to reject the evidence of your eyes and ears. It was their final, most essential command." — George Orwell, "1984"

There has been a photoshopped image of Italian nuns taking a selfie in front of the David in Florence going around for a year or more on social media.  It's fake, but people keep posting it anyway, and many believe it's real.  Especially old people - people my age.  That's unfortunate, because they keep posting it and one day it could be used to suggest old nuns are sexually repressed or just silly old women.  I post that the image is photoshopped with a link to the real photo of the nuns taking their selfie in St. Peter's Square.  I explain that this is a hit on women, women religious have a particular dignity.  I am always surprised when women post the meme.

Friends my age love to post gifs and memes mocking Trump and Sarah Sanders and anyone associated with this administration.  Likewise, conservatives post fake photos of Pelosi and Obama, and now cheapfake videos are spreading, altering faces and voices, to sound drunk, and so on.  All of this is getting more and more problematic with the popularization of deepfake technology.

I'm especially surprised when those who post such things, also tend to rage about bullying and discrimination, or even sometimes lament that they themselves were bullied or abused as kids, on the playground or in school.  Not only that, most everyone decries 'fake news' and yet many disseminate fake memes and gifs without realizing how much they are contributing to the problem. Oddly enough, most of these same people are retired college educated professionals who evidently do not recognize their active participation in spreading disinformation and in some cases, hate.

Of course, I use gifs and memes, but I've made it my practice to avoid the types which smear or shame others.  I also try not to post the trash memes and gifs which take down public figures and groups.  There is of course a place for legitimate parody or satirical art, which I've done, but there is no mistaking that for the deepfake technology intended to influence politically or divide and 'conquer' public opinion.

The word deepfake has been around only for a couple years. It is a combination of “deep learning” – which is a subset of AI that uses neural networks – and “fake.” The result is that it's possible to manipulate videos that still look authentic.

During the past couple weeks, we have seen high-profile examples of this. There was a deepfake of Facebook’s Mark Zuckerberg who seemed to be talking about world domination. Then there was another one of House Speaker Nancy Pelosi, in which it appeared she was slurring her speech (this actually used less sophisticated technology known as “cheapfake”).

Congress is getting concerned, especially in light of the upcoming 2020 election. This week the House Intelligence Committee had a hearing on deepfake. Although, it does look remote that much will be done.

“The rise of deepfakes on social media is a series of cascading issues that will have real consequences around our concept of freedom of speech,” said Joseph Anthony, who is the CEO of Hero Group. “It’s extremely dangerous to manipulate the truth when important decisions weigh in the balance, and the stakes are high across the board. Viral deepfake videos don’t just damage the credibility of influential people like politicians, brands and celebrities; they could potentially cause harm to our society by affecting stock prices or global policy efforts. Though some people are creating them for good fun and humor, experimenting with this technology is like awakening a sleeping giant. It goes beyond goofing off, into manipulative and malicious territory.” - Tom Taulli, Forbes


As a group, we baby-boomers seem to be enthusiastically embracing the technology that may someday be used against us. 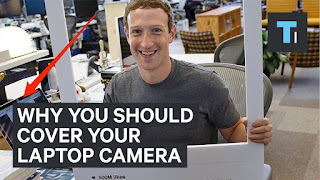 In my neighborhood everyone seems to have
home security cameras, ring camera,
their phones, GPS, and smart everything.
We're beyond 1984.