The Passion and the Child Jesus...

This morning at vigils, I read the account of the martyrdom of St. Joseph Cho Yun-Ho, a Korean martyr from 1866. He died, after great torture, following his father St. Peter Cho Hwa-So, beaten to death in front of his mother on this date, December 23, 1866.

Never be surprised at suffering and death amidst the wonderful celebrations of Christmas, the Divine Child, carrying His cross in this painting, indicates the way that leads to eternal life.

Pray the Divine Infant Jesu will succour those condemned to death in these days celebrating His sacred Nativity...especially those who will be murdered or commit suicide, and our men and women involved in combat or defense...ah! And most especially our dear brothers and sisters and children in the military!

Pray the Infant Jesus to manifest Himself to these - He simply must do it if we ask Him. (The little Jesus is always most obedient and in His humility, He does what He is asked to do. Have great confidence in the Infant Jesus!)
Posted by Terry Nelson at 10:03 PM 1 comment:

The Ecstasy of Christmas...

The mystery of the Bambino Jesu.
Pictured, "St Francis receiving the stigmata", El Greco
I looked everywhere for a painting of St. John of the Cross dancing in ecstasy with the Infant Jesus - I could find nothing. Perhaps I should paint something - I did so once and sold it without documenting it, therefore it is lost forever.
At Christmas I often meditate upon the birth of Christ in company with St. Francis of Assisi and St. John of the Cross...both saints who easily became enraptured with the Divine Infant in the arms of the Immaculate Virgin Mother. This painting of Francis somehow conveys to me the mystical grace of such an ecstatic meeting with the Bambino.
Today there remains the charming custom to wait until Christmas eve to place the Bambino in the manger, this is good for liturgical situations, or families who wish to bring the mystery of the night alive for their children - yet I never wait, in fact I always have the Bambino displayed in a little nicho, or shrine, all year - at Christmas he comes out in a special display.
Reflecting on the spirituality of John and Francis, I find it interesting that modern taste deems Francis light of heart, all sort of warm and fuzzy, while John is considered dark, and forbidding, too ascetic and severe for ordinary taste. That is silly. Francis may have been more severe than John in many respects. Nonetheless, both were balanced, spiritual men, passionately in love with the Divine Infant Jesus.
By the way, St. Francis did not invent the creche, he popularized it.
Posted by Terry Nelson at 7:40 PM 1 comment:

I once read where the celebration of the Nativity was largely a Marian feast in the early centuries.
In fact, Candlemas, once known simply as the Purification of the Blessed Virgin, was also understood to be primarily a Marian feast, albeit, never losing the focus upon Our Lord's presentation in the temple.
After the Second Vatican Council, the emphasis was changed and the feast was designated as "The Presentation of the Lord". The reform dictated that every liturgical celebration be Christological in focus, as if it hadn't been before? In retrospect, some of the reforms emanating from the Council seem an attempt to take away from devotion to the Blessed Virgin.
Most likely to satisfy the 'separated brethren' of the protestant reform, as if the Catholic Church had previously exaggerated devotion to the Blessed Virgin. How strange, since the Orthodox esteem and honor Our Lady far more eloquently and devoutly than anyone else, except for the Latin rite - up until Vatican II.
I wish someone more learned than I would discuss this subject - if they have not done so already, say Don Marco, or Fr. Zuhlsdorf, yet maybe Athanasius should do it.
I've always been disappointed that some of the feasts of Our Lady have been downgraded - or suppressed, while others have had the focused changed. On December 18 there once was a commemoration of "The Parturition of the Blessed Virgin Mary" a feast in anticipation of the Nativity, now obviously supressed.
At least the Church continues to refer to the Marian character of Advent - perhaps only the Hispanics really understand it, with the devotion of Posadas.
Posted by Terry Nelson at 10:18 PM 1 comment: 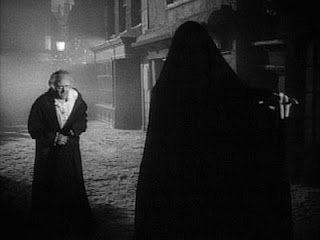 The Spirit of Christmas Yet to Come!
"The Phantom slowly, gravely, silently approached. When it came, Scrooge bent down upon his knee; for in the very air through which this Spirit moved it seemed to scatter gloom and mystery.
It was shrouded in a deep black garment, which concealed its head, its face, its form, and left nothing of it visible save one outstretched hand. But for this it would have been difficult to detach its figure from the night,

Franciscan tertiary and penitent.
One of the best things about the article in the Catholic Spirit regarding blogs and sins against the 8th Commandment, was the fact that they mentioned Blessed Angela of Foligno.
The book, "Saints Behaving Badly" may have been their source for details of her life. The writer, Thomas Craughwell does an excellent job presenting various saints who were sinners - these are my favorite kinds of saints. It gives us all hope, knowing that "Saints are sinners who keep trying."
Before Craughwell's book, and the focus in the Spirit's piece concerning Angela as a gossip, I had never heard of that before as being one of her chief faults. Although in reading her book, "The Divine Consolations" I do recall a moment she relates how after a certain homily she was highly critical of a priest, for which the Holy Spirit chastised her for that sin of the tongue. (I cannot find the passage at present however.)
That anecdote always stayed with me though - and I know I have sinned in like manner over the years. However Angela's life of sin, prior to her conversion involved much more than gossip. She was very vain, self indulgent, and of course a sensualist, or hedonist. There was a mysterious sin she could not bring herself to confess, while continuing to receive the sacraments. Most speculate she had an affair, while I wonder, having grown up in an Italian neighborhood, which had a local 'strega' or witch who performed abortions, maybe Bl. Angela had committed a sin related to that? (After all, she had a few children already - who subsequently died, along with her husband and mother, one after another in quick succession. That was during her conversion process that the Lord took her family away.) We will never know, since she and her confessor, as well as the Holy Spirit has never revealed to us what the sin was. Rightly so, since it is none of our business.
Regardless, Angela considered her sins so grave she did "penance as long and as hard as life itself". She lived in poverty after having given away her great wealth, performing her penance publicly whenever she could, until her confessor inclined her to greater discretion. She also was elevated to great mysticism and devotion - hence the only book we have of her, "The Divine Consolations of the Blessed Angela of Foligno". What we know of her life is more or less contained in this volume. I esteem it next to the works of St. John and St. Teresa, and have read and re-read it for a couple of decades now. I have three volumes of the same book, one in Italian, and two different versions in English. I'll have to go back and find where her chief fault was gossiping.
Thanks to the Catholic Spirit for calling attention to both the Blessed Angela, and the vice of gossip and detraction. The article will certainly help me to be a better man and writer - I hope.
Posted by Terry Nelson at 9:32 AM 5 comments: