I never give out candy on Halloween. I usually close up the shutters and keep very few lights on, as if no one is home. I didn't want the kids running through my garden and landscape instead of using the stairs - so I refused to participate in the tradition. This year however, I intend to change all of that.

I'm going to rig up some type of fence of tall stakes with banners, knit together with spider webs. I'll line the stairs with candles, and have a cauldron with dry ice at the top of the stairs, to make a scary fog. There will be smaller containers of dry ice in the hedges, to add to the fog. I'll have the front light on and give out candy - good candy - not cheap stuff. It will be fun. I was thinking I could dress up like Bottom from "A Midsummer's Night Dream" and wear the head of a jackass.

I wish I had some Valium.
Posted by Terry Nelson at 1:30 PM 6 comments: 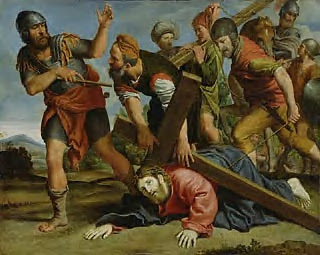 "No pit is so deep that his love is not deeper still." - Betsy Ten Boom

I was thinking of St. Therese's counsel to Celine about the humiliation of always finding oneself on the ground. She told her to rejoice at finding herself so imperfect as to be always falling on the ground through her faults and humiliations, since these so attract the mercy of Jesus. I often think of this during the stations of the cross, and imagine the face of Jesus so very close to mine when he falls carrying the cross. I find I'm content to meet him there, face to face in my misery. 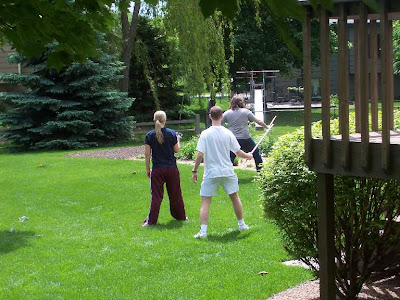 Holy Family Catholic Church.
Ray from Stella Borealis sent me an email which included an article from a local arts and news weekly covering a neighborhood conflict in a western suburb of Minneapolis. The problem is between Holy Family Catholic Church and a group of neighbors whose homes are adjacent to Church property. (City Pages article here.)
Holy Family parish has grown to be a vibrant Catholic community under the capable leadership of Fr. Thomas Duffner, who happens to be a very solid Catholic priest. Fr. Duffner is a traditional Catholic priest, although not in the rad-trad sense. He is very much in line with the Holy Father and the Magisterium of the Church. His theology is impeccable, and his homilies reflect that, while he is very attuned to what plagues contemporary society and culture. He is admirably active in pro-life causes, pro-family, and so on. He seems to be a model priest, and though a busy pastor involved in every aspect of his parish, he takes time to nourish his prayer life in daily adoration of the Blessed Sacrament and prayer.
Do not covet thy neighbor's house.
I go to Holy Family quite often for adoration, confession, and occasional Sunday Mass. A few months ago I couldn't help but notice signs neighbors had posted on the back of their property facing the Church; "Do not covet thy neighbor's house." I knew immediately that the Church was interested in buying the neighbor's property so as to expand the Church complex. Fr. Dufner had re-opened the K-12 parish school across the street, providing solid Catholic education in the Archdiocese. The parish has grown so fast, there is a genuine need for office space, as well as a 'gathering space' separate from the quaint Norman style Church edifice.
Naturally the parish would look to a line of houses on the other side of the block, as the property would be the reasonable place to acquire for expansion of the Church campus. Trouble is, the neighbors don't want to sell, even though the Church has offered above market value for their homes. The homes are little better than what I call 'drive bys' yet they have a charm and are well kept homes, in a highly desirable neighborhood. As I understand it, a couple of the same families have lived there for decades. It is their home.
I doubt this is an anti-Catholic thing.
City Pages came to bat for the neighbors in an article some may read as hostile to Catholicism, if not Fr. Dufner. So far the chancery has pretty much stayed out of the fracas - after all, it is a neighborhood problem. Although the chancellor did communicate with the homeowners concerned to say nothing dishonest is going on in the transactions. The neighbors are accusing Father of being overly ambitious in his plans for Holy Family as well as secretive in his tactics. Obviously this is a hot issue and people's perceptions may be skewed.
Is Fr. Dufner ambitious? Is it covetousness to desire the neighbor's property? I suppose Fr. Dufner is ambitious, although ambitious for the Kingdom of God. The neighbors may see it entirely on a natural level however. Having met Fr. Dufner, though I respect him much, I can maybe see where he'd come off as ambitious and maybe a bit aloof. That is just his personality. He's a fast talker - I mean that literally - he squeezes a heck of a lot into a Sunday homily. He's a no nonsense man of his convictions, thus his approach in this contest may come off as cold and too business-like for the homeowners. And he just might be moving too fast for them. (I don't know the facts other than what I've read, so I'm just speculating here.)
Put yourself in the neighbors place.
Not a few of Holy Family's parishioners come from neighborhoods far away from the church - they don't live nearby - that neighborhood is not the one they live in. When I first saw the signs, I did think the desire for neighboring property could seem like covetousness to those not associated with the parish. Yet that is an exaggeration of terms, since the Church is willing to negotiate for the property, and is willing to pay above market value. However, the enthusiasm of the parish to acquire the property may come off as a little pushy.
Having said that, Catholics shouldn't be too quick to demonize the homeowners. Relocating is a difficult thing for most people, especially if they are long term residents. A man's home is his castle, homes create strong emotional bonds in families. Even selling at above market value, a home owner may have difficulty in replicating his home, property, and neighborhood, not to mention leaving longtime friends and neighbors. Another consideration to think about is that maybe the neighbors just don't like Fr. Dufner and his parishioners.
I've lived in my house since 1990, and I love my house. People have driven by and stopped to ask if I would be willing to sell it. My answer is always "no". If the Church across the street wanted to buy my property, again I would say "absolutely not". It is a Seventh Day Adventist church and they annoy me every Saturday because they park in my driveway, jam the streets with their vans, and litter, yet it is only one day a week. But even if it were a Catholic church - they wouldn't get my house.

I think the neighbors of Holy Family should be given a little slack. A house is not just another piece of property, it is a home - their home. As for any anti-Catholic tone in the City Pages article one has to remember that is the secular media take on conservative Catholic priests who are in line with Church teaching. They didn't exactly attack Fr. Dufner. People shouldn't over react to this one.
Prayer and patience obtains all. Holy Family will get their land.
Posted by Terry Nelson at 10:17 AM 6 comments:

From Israeli News:
(IsraelNN.com) US President George W. Bush said a nuclear Iran would mean World War III. Israeli newscasts featured Gog & Magog maps of the likely alignment of nations in that potential conflict.
Channel 2 and Channel 10 TV showed the world map, sketching the basic alignment of the two opposing axes in a coming world war, in a manner evoking associations of the Gog and Magog prophecy for many viewers. The prophecy of Gog and Magog refers to a great world war centered on the Holy Land and Jerusalem and first appears in the book of Yechezkel (Ezekiel). - Source
The 'prophet' who would stop into visit me at the religious goods store I worked at, told me a year or two ago that the final war is soon coming. He cited the same passage from Ezekiel the Israeli News used to base their story.

It could happen.
Posted by Terry Nelson at 5:14 PM 1 comment:

Email ThisBlogThis!Share to TwitterShare to FacebookShare to Pinterest
Labels: Rubbish 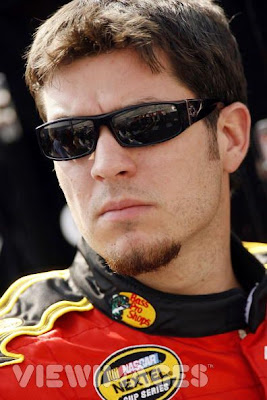 Martin Truex announced today he is concerned about a stalker, and may quit racing entirely.
Posted by Terry Nelson at 7:44 PM 6 comments: