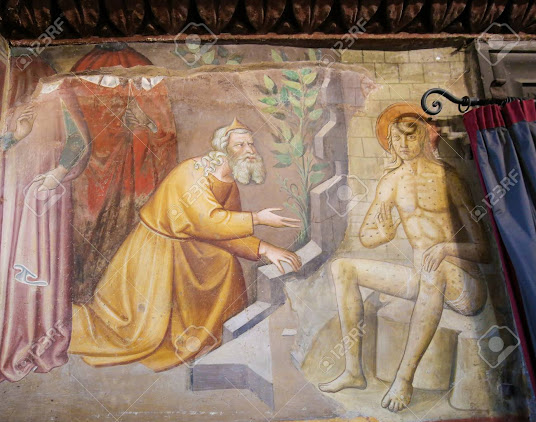 The souls of the just are in the hands of God:

It seems to me that Job's friends are among the commentators and critics of Traditiones custodes, as well as those who support Pope Francis' initiative.  There is so much one could say for and against - for many, the big focus has been upon the Traditionalists who voiced the initial outcry, condemning the 'mean ol' pope' as hating the Latin Mass and being a modernist, heretical, anti-pope.  Pretty much everything they thought of him since his election.  Likewise, so-called liberals cite the trad hostile reactions as proof against them, that they brought it upon themselves.  I tend to agree with that - but after several posts on FB, my opinion doesn't matter on any of it, despite the fact I've witnessed traditionalist hostilities since the early '70's and did my best to navigate through that narrow channel which divided the 'Spirit of VII' crowd and the 'Trad-Remnant-CUFF' zealots.

As I always say, I love Pope Francis and have no problem with what he says or does - even if I don't quite understand how it is reported some of the time.  I trust God.  Jesus I surrender myself to you, take care of everything.

Son, when thou comest to the service of God... prepare thy soul for temptation.

That said, I can't help ponder how all of this is permitted by God.  I trust in Divine Providence, I trust in the Divine Mercy.  These intense reactions, from all sides, certainly remind me of the Prophet Job and the testing he went through, the sufferings he endured, the shame before his friends, who afflicted him even more.  St. Therese understood it well, when she applied the Prophet's words to her own suffering, proclaiming, 'even if he should kill me I will trust him.'  Therese at the time, was going through her trial of faith sharing the lot of unbelievers who have no faith, no life, as it were - and certainly no light.  Pious platitudes did nothing to help - the only thing she could do is make acts of faith - unfelt.  Her senses and faculties darkened, accusing her, mocking her, blaming her - like Job's friends.

So the commentary flying around online regarding the Pope's provisions for the TLM is only natural, the criticisms - more accurately, condemnations and calumnies against the Holy Father - are another matter.  God cannot be pleased by them.  Just as God was not pleased with Job's friends.  So that is what I'm thinking about now, along with the scandal of Msgr. Burrill of the USCCB and all the debate that has aroused, along with attacks against Fr. James Martin and those who object to the buying of datamined information used to out him.  I commented on that as well - but it doesn't matter what I think, and I'm better off imitating Job's silence.

The trials of the just serve a higher purpose

chap. 42) Job makes his humble confession: "I know that Thou canst do all things.... I have spoken unwisely, and things that above measure exceed my knowledge." He thus acknowledges that his complaining was excessive and his words sometimes unconsidered. Nevertheless the Lord tells Eliphaz: "My wrath is kindled against thee, and against thy two friends, because you have not spoken the thing that is right before Me, as My servant Job hath.... Offer for yourselves a holocaust. And My servant Job shall pray for you. His face I will accept, that folly may not be imputed to you." And the Lord blessed the latter days of Job with even greater blessings than before, and he died in peace very advanced in years.

The clue to the whole book is to be found in the first chapter, where we are told how the Lord permitted the devil to try His servant Job. The conclusion, then, is obvious: If men are visited by God with tribulation, He does so not exclusively as a chastisement for their sins, but to prove them as gold is proved in the furnace and make them advance in virtue. It is the purification of love, as the great Christian mystics call it. In the prologue Satan asked (1:9) : "Doth Job fear God in vain?... His possessions have increased on the earth." Now we see how even in the greatest adversity Job still remained faithful to God. That this is the meaning of the trials sent upon the just is shown in many other passages of the Old Testament. - Reginald Garrigou-Lagrange, O.P.