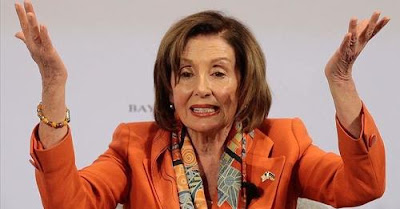 Mrs. Pelosi is not to be admitted to Holy Communion:

“I asked her to repudiate this position, or else refrain from referring to her Catholic faith in public and receiving Holy Communion,” he wrote.

“I also advised her that if she refused to do this, I would be forced to make a public announcement that she is not to be admitted to Holy Communion.” - CNA

The Archbishop acted within his right as the local ordinary of San Francisco.  Many people are upset and angry, others are gloating, I support the Archbishop.

I have deep respect for Archbishop Cordileone. I am sure this was a difficult decision, especially since so many non-Catholics, along with some practicing Catholics, do not understand the Eucharist, and most likely think this was an uncharitable act, meant to shame and punish. That's not what this is about. This type of action is always for the benefit of the person under interdict/ban, as well as those who may be otherwise scandalized if there is no correction.  Mrs. Pelosi's policies and statements demonstrate she is not in communion with Catholic teaching, therefore she ought to abstain from Holy Communion - the source and summit of Christian life, the sign of unity, and the true body, blood, soul and divinity of Jesus Christ.

Unfortunately, I expect Cordileone will face growing criticism and protest, especially from protesters who support Roe v Wade and a woman's right to terminate her pregnancy.  His life is most likely in danger and churches will probably suffer desecration and vandalism as a result.  We've already seen it in the United States and in Chile, Canada and elsewhere.
That said, "Cordileone’s instruction applies only within the San Francisco archdiocese." Pelosi most likely will be able to receive Communion in another diocese.  [In Genoa, during the time of St. Catherine of Genoa, her bishop interdicted the entire city, so she popped over to a nearby diocese (in her day there were many) for Mass and Communion.]
Prayers for all concerned.  Other than that, I have no opinion nor any responsibility to comment further.
Posted by Terry Nelson at 10:59 AM No comments: