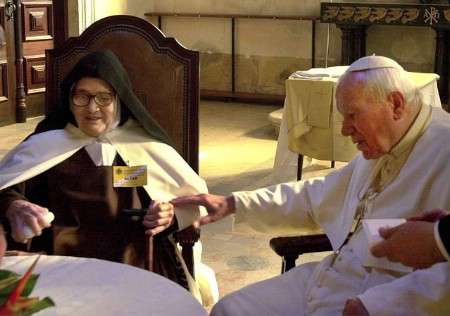 On the day of the beatification of her cousins Jacinta and Francisco.

They died in the same year and they were both chosen by Our Lady - she, to spread devotion to her Immaculate Heart, and he - he was the Pope of the prophecies, her servant and instrument. It was 25 years ago today that her hand guided the bullet that was to kill him, yet she saved his life. He understood the meaning and import of Fatima in a new light. Of all the Pope's to know the "third secret" he was the one who understood it and revealed it to the Church and the world. This extraordinary intellectual Pope with the simple piety of a peasant, he knew the secret. I am convinced that this is what motivated him. He is Our Lady's Pope, the Fatima Pope, and I dare say, the Pope of John Bosco's vision as well. He has led us into the new millenium and now watches over us from Heaven. Sr. Maria Lucia de Jesus of the Immaculate Heart and Pope John Paul II, with the little Shepherds, Francisco and Jacinta, pray for us now and at the hour of our death. Amen.