It seems some people are unhappy with the Pope. 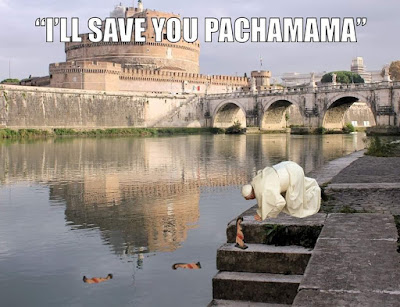 Yesterday the Holy Father apologized for the theft and disposal in the Tiber of three Pachamama images, which had been on display in a Church not far from St. Peter's Square.

According to a video of his remarks that made the rounds on social media, Francis said the statues had been displayed “without idolatry” in the Church of Santa Maria in Traspontina, located about halfway down the broad Via della Conciliazione that leads away from St. Peter’s Square.

Francis also added that Roman law enforcement officials have recovered the discarded statues and are holding them for the moment at a police station.

Friday’s apology caps what has been a month-long drama surrounding the statues, which first made an appearance during an Oct. 4 indigenous prayer service staged in the Vatican gardens in the presence of the pope. - Crux

People are attacking and mocking the Pope for this.  Many photo shopped memes have surfaced online, insulting the Holy Father and indigenous people.
Posted by Terry Nelson at 12:24 PM 10 comments:

You are always going to disappoint someone...

Yesterday I went to the doctor.


I posted about how fun it was on FB and included some of the more frustrating details for my friend. I forget how very sensitive FB friends can be. What follows is my post with an exchange between meself and me friend...

It was interesting. While involved with medical professionals this past week, many questions arose and for a couple of questions I simply responded, "I'm Catholic." Even when my Dr. had to ask about depression, one of the questions was about feeling suicidal and I said, "Nope. I'm Catholic." He knows me BTW - I've seen the same doctor since 1995.


Friend's comment:  Being Catholic doesn't make us immune from suicidal ideation and attempts. It's a devastating reality of the disease of mental illness. I've been there and I am convinced Jesus has so much mercy in this area because a "normal/healthy" person doesn't go down this path. It is part of the disease.

My response: It works for me. "You would play upon me. You would seem to know my stops. You would pluck out the heart of my mystery?" Listen Gina, it also puts an end to questions I consider a matter of conscience and for me alone to divulge to whom I choose and when I may or may not be seeking treatment for any sort of mental health issue. These questions are routine for adults my age - or so I'm told - I expect to comply with some Medicare or insurance regulation. It's just my personal response to a banal check list for my Internist Dr. who incidentally, couldn't give me a cortisone shot for severe arthritic knee pain before sending me to an Orthopedist, yet he can give me a script for off-label use of a psychotropic drug.

Yesterday I went to the Dr. with real ailments, only to be referred to a specialist - it makes me crazy.

Of course I know Catholics have episodes of suicidal ideation and attempt suicide. St Therese did. Nuns in India killed themselves. I know there is mercy for suicides and so on. It's a very human, rather common disease right now. Telling the Dr. 'I'm Catholic' was my 'sick' humor response - and he gets it. He's often told me in the past, being Catholic was my main problem - although I hope I convinced him it isn't being Catholic that poses a problem, it's the Inquisitors, the rigid, ideological Catholics who try to tell others how to live their lives. As the Pope said, 'There are many schools of rigidity in the Church - often masking serious problems, hiding something else.' Each of us can maybe ponder that in our heart.