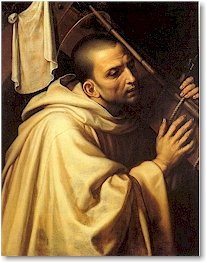 "When in disgrace with fortune and men's eyes"

"When in disgrace with fortune and men's eyes,
I all alone beweep my outcast state,
And trouble deaf Heaven with my bootless cries,
And look upon myself, and curse my fate..."
-Shakespeare, Sonnet 29


Yesterday's post brought me a great grace, it is called compunction. Compunction is not a word used very much anymore these days. My understanding of it is that it is like contrition, but it remains after the confession of one's sins. It's not depression nor is it "the sadness that leads to death" as St. Paul writes. It's a spiritually healthy condition, so desirable and consoling I wish I could be steeped in it every waking hour. It's very much linked to humility. One may imagine a saint, such as Bernard, pictured here, overtaken with compunction - "stung to his heart" by the sight of Jesus crucified and what Love has suffered in atonement for men's sins, and Bernard takes up Christ's cross and follows him. Still, feeling the sting in his heart, he understands his own sins have been the cause of so much grief, of so many wounds inflicted upon the Sacred Heart of Jesus. "Deep calls unto deep." 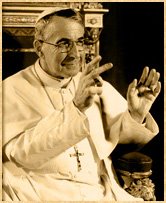 I have searched my office at home, my art cabinets, and every book, as well as my office at work, for a marvelous quote I had from John Paul I - not JPII - but his predecessor. The Holy Father was speaking at the Wednesday audience, I have no documentation on hand, but it is authentic. The Holy Father said something to this effect, "Excuse me for saying this, others may fault me, but I think the Lord loves humility so much that He sometimes allows very good souls to fall into sin, even mortal sin. In fact He may permit them to fall repeatedly into a very grave sin, in order that the soul may become humble. Yes God so loves humility that He will allow Himself to be offended so that the sinner may come to repentance and become humble." I know I didn't do his statement justice but it is very close to what the Holy Father said.

In 1972 I had a profound conversion experience, my life changed completely. I entered monastic life because I was convinced I could not be saved in the world. It wasn't enough, so with Charles de Foucauld and Benedict Joseph Labre I left the enclosure to live a penitential life as a 'pilgrim'. But that was way too difficult - I believed I had to return to enclosed monastic life.
Returning from Europe I asked to be receivd once again, only to find out that my novice master had left, the Abbott had resigned and all the novices left as well, and they were not accepting anyone at the time. My superficial spiritual edifice suddenly and dramatically collapsed.

Living in Boston at the time, I was in the North End one Saturday, walking amidst the stalls at the market while a car had stopped at the intersection I was at, the stereo was blarring and it was Dianna Ross' song, "Love Hangover". (It was the height of disco and I was still pretty young - obviously.) I thought it was the coolest song ever. I walked back downtown, bought some hip clothes and went out to the bars that night - actually, just about every night for a few months. I returned to my old way of life, out of desperation, loneliness, isolation, (I was supposedly a hermit) and what is called 'acedia' - something many people today think is the 'dark night' - it's not.

Did you ever see "Looking For Mr. Goodbar", the movie with Dianne Keaton about a promiscuous school teacher who had a double life going out to all the clubs at night while teaching at a school by day? That was kind of me - the male version of course! I worked at a Church in Back Bay at the time and everyone thought I was a monk, but I went to all the clubs by night. My fall from grace was sudden, and my recovery was just about as sudden. This sinful period was only a matter of a few months. I left Boston to come home to the Twin Cities, realizing I was ruining my life in Boston. It was the most mortifying experience of my life, I hated it here. Gradaually I adjusted, regained my old job with better pay and a higher position. I returned to the practice of prayer and daily communion, balanced with a 'love of the world' - in this, to a lesser degree, I found some affinity with Teresa of Avila. Nevertheless, it was a knock down drag out fight to cut every tie with my sinful past. A series of fallings and risings at every step.

Through it all, I remained close to our Carmel and my 'spiritual sister' who is still there. Once in a letter she reassured me by writing, "Even if you have to go to confession every day, even twice a day, never fail to do so. Remember, a saint is a sinner who keeps trying." (I got to know a lot of priests in those days.) Only much later did I read the statement of John Paul I, about sin and the acquisition of humility. Only then did I really understand temptation and sin and God's inscrutable mercy.

I find comfort in this quote from St. Teresa Benedicta a'Cruce, "In aridity and emptiness the soul becomes humble. Former pride disappears when a man no longer finds in himself anything that might cause him to look down on others." - Science of the Cross . In my aridity and emptiness I fell back into sin, but never worry, it returns, only this time the soul understands God is with it, that faith and hope support it, that love sustains it. Edith Stein wrote elsewhere, "The soul ought to consider aridity and darkness as fortunate omens; as signs that God is beside it, freeing it from itself, taking the initiative out of its hand." My dreamsicle spiritual life, coddled by God in it's first fervor was too immature, too superficial, too unguided, too idiosynchratic for me to be on my own. It had to collapse, God had to take the initiative out of my hands, I had to become humble - God it is who inspires and perfects our faith. That is how I learned the meaning of these words, "I have more understanding than all who teach me because I do your will." Ps 119. Not that I go it alone now without counsel, but there is a freedom of spirit the Holy Spirit bestows in addition.

In the market, after Mass this morning, I heard the same music I listened to in Boston years ago, and all of these memories came flooding back vividly and poignantly, increasing the compunction I experienced at Mass. I did not have the same sins that Fr. Erickson had, but I have sinned too, all of us have. As I said yesterday, God's mercy is so inscrutable. We must have hope - confidence and love, as little Therese taught. And we must have humility and mercy in our hearts.

May the souls of the faithful departed rest in peace and may perpetual light shine upon them.
Posted by Terry Nelson at 12:09 PM 3 comments: