The Epiphany of Hieronymus Bosch 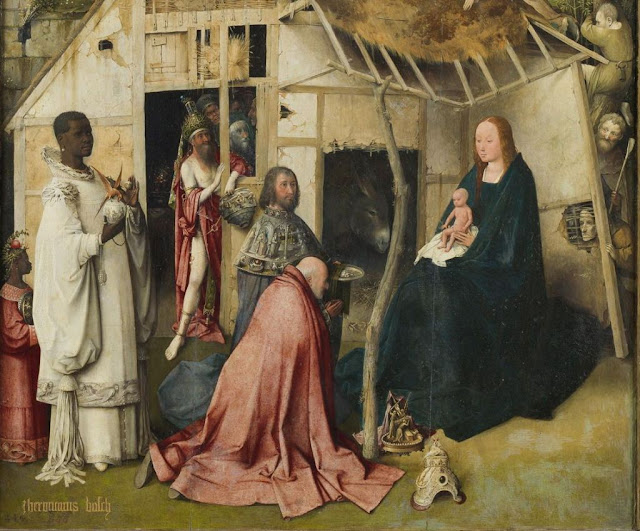 I thought of the Bosch while meditating on today's Gospel.  The kings represent the Turks, ‘Ethiopians’, and Mongols - reminding me of all the powers interested in the Middle East today.  In the background is the figure of the Antichrist - at the time Herod, the precursor of the Antichrist.  He is depicted as a voluptuous sensualist - vain, narcissistic and corrupt.  He is Antichrist since he wants to destroy the child Jesus.

We read the Magi were warned to not return to Herod and they left by a different route.  We know the Holy Family fled, and that Herod massacred the Holy Innocents to ensure he killed his rival.  How like our times, I thought.  Children, babies, the unborn - are eliminated in our day, legally and illegally.  Others are driven away from their homeland, or exploited and given over to slavery.

St. John tells us there are many Antichrists among us.  Herod is one prototype.  The Bosch figure is perhaps a warning, a projection of what will be in the end times.  An immoral, corrupt hedonist, rallying 'those who walk after the flesh in the lust of uncleanness and despise government: audacious, self willed, they fear not to bring in sects, blaspheming.'  (2 Peter 2:10; Douay-Rheims Haydock)

The Epiphany is much more than that, of course.  It is the manifestation of the divinity in Christ, and it is threefold:  To the gentiles in the adoration of the Magi, in the baptism by John in the Jordan, and in the wedding at Cana.

Imagine - wanting to kill the Messiah, the Savior, the King of the Jews?  As the angel said to St. Joseph: 'Herod is going to search for the child to destroy him.' (Matt 2:13)

Many today are out to destroy - in the end, they fail.  "And so I say to you, you are Peter, and upon this rock I will build my Church, and the gates of the netherworld shall not prevail. (Matt. 16:18)