Thanksgiving with my closest friends.


Remember when Ross says that he is having one of his worst Thanksgivings ever because of his divorce from Emily and eviction?

Chandler jumps in to remind everyone that he is "the king of bad Thanksgivings" and proceeds to tell the first of a series of Thanksgiving flashbacks.

Thanksgiving 1978: A young Chandler is told that his parents still love him, but his father would rather sleep with the house-boy than with his mother.

Phoebe claims she has an even worse Thanksgiving story.

Thanksgiving 1862: Phoebe is a medic for the Union Army during the American Civil War. She is tending to a wounded soldier when her arm gets blown off, prompting her to say, "Oh no."

Ross says that the Thanksgivings have to be limited to this life (as Phoebe was referring to a Thanksgiving that occurred in a 'past life'). Rachel says she knows Monica's worst Thanksgiving, but Phoebe interrupts with a story about the Thanksgiving when Joey got a turkey stuck on his head.

Thanksgiving 1992: Phoebe (who was living with Monica at the time) walks in to their apartment and is shocked to see Joey with a turkey on his head; Joey put it on to scare Chandler. Monica enters and freaks out, but she and Phoebe can't get the turkey off his head. Chandler enters and screams, and Joey tries to point and laugh at him, but keeps pointing in the wrong direction because he can't see.

In the tenth season episode entitled "The One Where Chandler Gets Caught", the same 1992 Thanksgiving flashback of this episode is used, yet Phoebe replies to Joey's complaining about the turkey smelling really bad with "Yeah, of course it smells bad. You've got your head inside a turkey's ass." instead of the "Well, of course it smells really bad. You have your head up a dead animal." As written for this episode. - Wikipedia

My friends were so fun! Miss you much - at least I have the DVDs. When co-workers ask who I'm spending Thanksgiving with, I always tell them "I'm having a few friends over" - that's not a lie, is it? Anyway, they are always so consoled I won't be spending it alone.

I am so going to sing "Memories" now - followed by "The Way We Were" and I may as well sing, "What Becomes of the Broken Hearted" while I'm at it! (Thank God for my home-karoke machine.:) The holidays can be so nostalgic can't they?

Maybe I'll go to Walgreen's and stop by Kmart - I think they're open today. (Just kidding, Ross and Rachel are coming over with Phoebe and Regina Falangi.)

November 22 and the loss of innocence...

Mark Balma's "Pieta"
He's a wonderful painter. I haven't seen this painting in person but it was presented at the Cathedral of St. Paul with much fanfare last week. I like what I see in photos, although it seems a bit 'stiff' - however, I think it is just the photo - paintings need to be 'experienced' in relationship with the viewer, in person. Balma is a fine artist, the photo cannot do it justice.
The anniversary of the assassination of JFK is the 22 of November. It was 1963. I was in class, after lunch, when the announcement came over the intercom and we were all dismissed from school. I remember starring at the intercom in disbelief as the announcement was made. Returning home to watch non-stop footage on television. It is like yesterday to me.
Just a couple of years earlier Sr. Lillian led us all in prayer that this Catholic Senator would be elected President of our Country.
I, along with most of the world loved President Kennedy, and Jackie. We knew them as Jack and Jackie. They gave an international dignity and style to the White House and the presidency.
Bobby was later assassinated, and Jackie said, "They are killing Kennedys." And she took her children out of the country. Some people resented that. Not I.
I think Bobby's death hit me much harder than Jack's. He would have made a better President. I remember vividly his funeral train heading to Washington for his burial at the Arlington National Cemetery - the tracks lined all of the way with mourners. I remember it all so well..."The Battle Hymn of the Republic" played along the way. I remember Dr. King too. I do not want to look at footage of these events ever again, because they are emblazoned upon my memory. Yet younger people need to see it - they need to locate the pivotal moment of our decline.
Our Country entered it's decline in those days. I don't think we can ever recover. I know we haven't.
"Fallen, fallen is Babylon the great!
She has become a dwelling place for demons.
She is a cage for every unclean spirit,
a cage for every unclean bird:
For she has made the nations drink
the poisoned wine of her lewdness." Revelation 18: 2-3
In many respects, that is us, exporting our MTV, movies, fast food, Hollywood morality, condoms and Planned Parenthood, what have you. We've fallen with our President.
Posted by Terry Nelson at 8:17 PM 2 comments:

I have just learned that Bishop Dudley passed away last evening at 10:30PM, I'm sorry I do not have more precise information at this time.
Bishop Dudley, shown here at an ordination at Holy Apostles Seminary, was a very humble, devout priest and servant of God. I am certain he is a saint.
May he rest in peace+
Posted by Terry Nelson at 12:44 PM No comments: 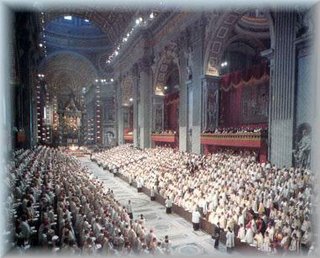 The third session of Vatican II closed in 1964.
The Servant of God, Pope Paul VI closed the third session of Vatican Council II on this day by announcing a change in the Eucharistic fast and formally declaring Mary as "Mother of the Church," as had always been taught.
Maybe His Holiness Pope Benedict XVI will use this anniversary to announce the new indult for the liberalization of the traditional rite known as the Ordo of Pius V.
Probably not - but when he goes to Turkey next week, if he were to be assassinated there, will it ever be promulgated?
Posted by Terry Nelson at 6:20 PM 3 comments: