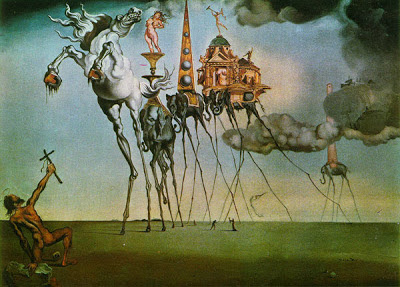 The devil’s knowledge is very wide, in every field. He even knows the verses of the Bible very well and uses them in fighting people such as theologians. In the temptation on the mount, he used the Holy Bible in his own way (Matt. 4:6). He is even the author of all heresies and heterodoxies. He put them in the minds of heretics and offered them wrong concepts for the verses of the Bible. True are the words of St. Athanasius the apostolic, "Our enemy is not the Arians but the devil."

from “Diabolic Wars”
Posted by Terry Nelson at 10:45 AM 2 comments:

We are living in the era of “piccolomini… little men”...

“When small men begin to cast big shadows, it means that the sun is about to set.”
– Lin Yutang, 20th century Chinese philosopher

Fr. Z wrote an extremely scornful assessment of the new members of the College of Cardinals, appointed by Pope Francis.  Traditionalists are upset and Z invites them to laugh it off since, "The ploy and play of the list is so obvious that it is hardly to be taken seriously anymore."  Beware - as St. Benedict, citing Scripture in his Rule on the Tenth Step of Humility cautioned: "Only a fool raises his voice in laughter."(Sir 21:23)

Fr. Z appears to be growing more bitter and scornful than ever before.  I wonder if  resentment and the remembrance of wrongs is perhaps part of the cause?  I of course do not know - but I would avoid priests like him and be careful not to be led astray in opposition to the Pope and Bishops in communion with him.

A little man with a big blog.

Fr. Z brings it on himself.  I'm not judging his soul, not even his motivation - though I may wonder about it after I read his critiques of what the Pope has to say.  Today his contradiction of the Holy Father's allocution at yesterday's Wednesday Audience is extremely disrespectful and defensive.  He can do and say as he wishes since he appears to be a 'free-agent' priest, but those who follow him and others who read him, they cannot be well served by it, much less edified.

"Scorn, bitterness, scoffing, these are no weapons. Belittling others, not seeing Christ in them -- this too is to inflict wounds -- is to do to Christ what we are doing to the least around us. This is an expression of fear -- fear of being laughed at and scorned in turn. If we scorn others we will not win them. There is no love in scorn." - August 13, 1951 - The Duty of Delight: The Diaries of Dorothy Day

Fr. Z finds the CNA article on the Holy Father and what the Pope says "amusing." His post makes it clear he wasn't amused. In fact, his response was what he claimed the Pope's 'attack' on people who desire Tradition was - "pretty vicious."

Those who really believe do not attribute too much importance to the struggle for the reform of ecclesiastical ritual. They live on what the Church always is; and if one wants to know what the Church really is one must go to them. For the Church is most present not where organizing, reforming and governing are going on but in those who simply believe and receive from her the gift of faith that is life to them." - Ratzinger: "Introduction to Christianity." Holy, Yet Mingled with Sinners: The Church of the Pope Theologian

Yup.  I use pull quotes too.

Email ThisBlogThis!Share to TwitterShare to FacebookShare to Pinterest
Labels: Blessed is the man who does not sit in company with scoffers, Traditional anti-papists, Whoever is a little one - let him come to me

"I have found my heaven on earth, since heaven is You, O Lord, and You are in my soul." - St. Elizabeth of the Trinity
"The meaning of Christ's Ascension," writes Pope Benedict XVI, "expresses our belief that in Christ the humanity that we all share has entered into the inner life of God in a new and hitherto unheard of way. It means that man has found an everlasting place in God." It would be a mistake to interpret the Ascension as "the temporary absence of Christ from the world." Rather, "we go to heaven to the extent that we go to Jesus Christ and enter into him." Heaven is a person. "Jesus himself is what we call 'heaven'."

“Holy Father, I pray not only for them,
but also for those who will believe in me through their word,
so that they may all be one,
as you, Father, are in me and I in you,
that they also may be in us,
that the world may believe that you sent me.
And I have given them the glory you gave me,
so that they may be one, as we are one,
I in them and you in me,
that they may be brought to perfection as one,
that the world may know that you sent me,
and that you loved them even as you loved me.
Father, they are your gift to me." - Jn 17:20-26

"O my God, You are in me and I am in You. I have found my heaven on earth, since heaven is You, O Lord, and You are in my soul. I can find You there always; even when I do not feel Your presence, You are there nevertheless, and I like to seek You there. Oh! if only I could never leave You alone!" (cf. Sr Elizabeth of the Trinity, Letters)
Posted by Terry Nelson at 12:30 PM 1 comment: