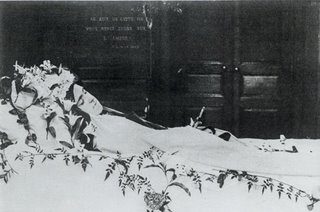 Shortly after 7PM little Therese died this very same evening in 1897. I was working tonight and forgot.

She died much like Our Lord, suffocating in great agony; the weeks and days leading up to her death, St. Therese suffered an ineffable darkness, "the trial of Faith". Neither her own words, nor those of any other living person, can describe what it was like to share so intimately her Beloved's death. Not even her sisters could comprehend it.

Therese is little, and yet great. Nevertheless she is always little...very, very little. I sometimes lament she has been declared a Doctor of the Church, resulting in many academics, intellectuals, and masters of theology and spirituality making a science of her "little way." Many times they miss. They miss her "littleness" - her insignificance...

The only great theologian or mystic that I know of who best writes of her life is St. John of the Cross, the writer whose works Therese's spirituality most perfectly embodies. John of the Cross was a little soul as well.

And the person who most closely lived Little Therese's "little way" was even more little and insignificant that herself - Blessed Teresa of Calcutta. 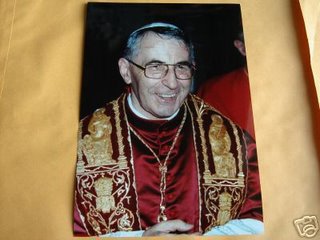 The Servant of God, Pope John Paul I

Holy Father, pray for us, now and at the hour of our death. Amen
Posted by Terry Nelson at 7:44 PM 1 comment: 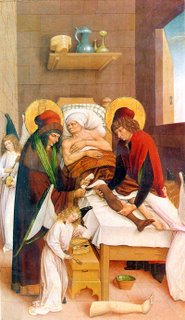 The two physician saints are depicted here in one of their most famous posthumous miracles. They replaced the diseased leg of a man with the leg of another man who had died. It was obviously from a man of color. Hence, the worlds first leg transplant...probably not so astonishing for self-sufficient moderns, who have become accustomed to transplant surgeries. If you are going in for a transplant, I think I would pray to these two saints if I were you. If you're waiting for a transplant, all the more reason to invoke their assistance.

Go to Don Marco's site, "Vultus Christi" for everything you want to know about these two saints.
Posted by Terry Nelson at 7:19 AM 1 comment:

The blessed Pope, John Paul I 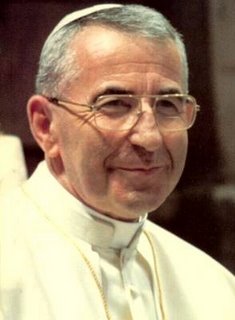 I read with joy that the Holy Father's cause is progressing well. He was like a shooting star, having reigned for only a month. He humbly combined his predecessor's names to become the first pope in history with a double name. By this act he demonstrated to the world and the Church that the Vatican Council was indeed an authentic council and the papacy would continue the reforms initiated there. John Paul II proved likewise.

Such a short reign, marked by extraordinary humility and charity - you see this in his face. Pray for us John Paul I as we prepare for the anniversary of your death, pray for unity within the Church. (JPI's anniversary of death is September 28 - he died in 1978.)

Here is the article:

"Rome, Sep. 25 (CWNews.com) - The diocesan investigation into the cause for beatification of Pope John Paul I is nearing its conclusion, 28 years after the death of "the smiling Pope."

Thursday, September 28 will mark the anniversary of the sudden death of Pope John Paul I, who had succeeded Pope Paul VI just 33 days earlier. According to an official responsible for the cause, the diocesan inquiry will come to an end within a few more weeks.

Ordinarily, the local investigation of a cause for beatification begins in the diocese where the candidate died. But in this case, for a variety of reasons-- including the fact that Pope John Paul I had spent so little time as Bishop of Rome-- the inquiry was begun in the Belluno diocese, where Albino Luciani was born in 1912. According to Msgr. Giorgio Lise, a vice-postulator for the cause, the diocesan inquiry is likely to conclude by the feast of St. Martin, the patron of the Belluno diocese, on November 11." [snip] continued
Posted by Terry Nelson at 9:17 PM 4 comments: 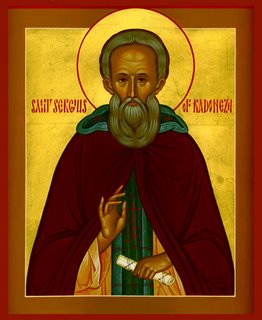 Monk and mystic - friend of animals.


My favorite saint from the Russian calendar. He founded, if my memory serves me, the famous Monastery of the Holy Trinity near Moscow, along with a couple of others as well. He had frequent apparitions of the Mother of God, lived the ascetic life most perfectly, and had the animals of the forest, including bears, eating out of his hands. He is like the St. Francis of the Russian Orthodox Church. September 25 is his feast day. He died in 1392.


Viit here for details on his life.
Posted by Terry Nelson at 3:21 PM No comments:

He invented the word 'nerd'. I never knew that. I didn't like Dr. Seuss as a kid because I early on developed a taste for fine art, therefore cartoons held no fascination for me. I always read the stories of saints and rarely anything else - well maybe Greek mythology and Grimm's Fairy Tales - but that is about it.

Now as an adult I like Dr. Seuss and the Simpson's.

Our Lady of Ransom 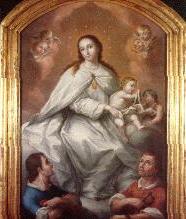 Or, Our Lady of Mercy.

Today's feast of Our Lady is primarily celebrated in South American countries and in Spain. It is the titular feast of the order of friars known as the Mercedarians, founded by St. Peter Nolasco. St. Raymond Nonnatus was also a member of this order, founded to ransom Catholic slaves held captive by Muslims.

Unlike today, when there is no bargaining with terrorists, in those days ransom would be paid to free those held captive. St. Raymond exchanged himself for such and was enslaved for a time. The Saracens pierced his lips with a padlock to prevent him from speaking about the Catholic faith. He himself was later ransomed by his fellow Mercedarians.

Things do not seem to have changed much with Muslim-Christian relations have they? The Holy Father meets with Muslim leaders tomorrow. Let's pray Our Lady to guide this meeting.

During the English persecutions under the reign of Henry VIII and Elizabeth I, devotion to Our Lady of Ransom took on greater fervor in the hopes of bringing the Church of England back into "Our Lady's Dowry".

In our day, aside from the continued threats of terrorism, our culture is faced with many other moral afflictions, such as addictions to vice and various obsessive-compulsive disorders. Our Lady of Ransom would seem to be the title one could implore Our Lady to obtain freedom from those sins that ensnare us.
Posted by Terry Nelson at 3:42 PM No comments: