Prayer in reparation for outrages committed against the Blessed Sacrament 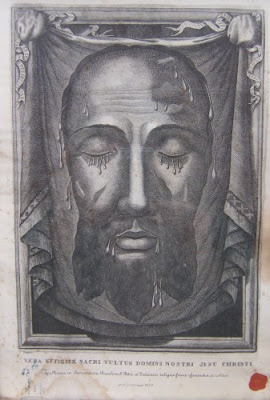 May the most holy, most sacred, most adorable, most incomprehensible
and unutterable Name of God be always praised, blessed, loved, adored and glorified,
in Heaven, on earth, and under the earth,
by all the creatures of God, and by the Sacred Heart of Our Lord Jesus Christ
in the Most Holy Sacrament of the Altar. Amen.

Devotion to the Holy Face.

With an increase of desecrations of churches and especially the Blessed Sacrament in France, as well as increasing attacks upon priests along with the genocide in Nigeria, it seems to me prayers in reparation need to be made with greater fervor.

Almighty and Eternal Father, since it has pleased Our Divine Savior to reveal to mankind in modern times the power residing in His Holy Face, we now avail ourselves of this Treasure in our great need. Since our Savior Himself promised that by offering to You His Holy Face disfigured in the Passion we can procure the settlement of all the affairs of our household, and that nothing whatsoever will be refused to us, we now come before Your throne.

Eternal Father, turn away Your angry gaze from our guilty people whose face has become unsightly in Your eyes. Look instead upon the Face of Your Beloved Son; for this is the Face of Him in whom You are well pleased. We now offer You His Holy Face covered with blood, sweat, dust, spittle and shame, in reparation for the worst crimes of our age, which are atheism, blasphemy, and the desecration of Your holy days. We thus hope to appease Your anger justly provoked against us. The All-Merciful Advocate opens His mouth to plead our cause; listen to His cries, behold His tears, O God, and through the merits of His Holy Face hearken to Him when He intercedes for us poor miserable sinners. - Source

Show us your Face O Lord, and we shall be saved.
Posted by Terry Nelson at 12:51 PM 2 comments:

Email ThisBlogThis!Share to TwitterShare to FacebookShare to Pinterest
Labels: Reparation 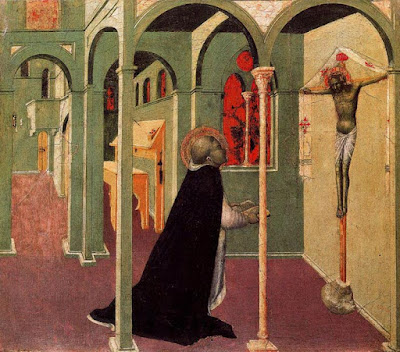 A priest wrote it.

From the Doctor Angelicus:

Whether railing or reviling is always a mortal sin (II-II:72:2)

Words are injurious to other persons, not as sounds, but as signs, and this signification depends on the speaker’s inward intention. Hence, in sins of word, it seems that we ought to consider with what intention the words are uttered. Since then railing or reviling essentially denotes a dishonouring, if the intention of the utterer is to dishonour the other man, this is properly and essentially to give utterance to railing or reviling: and this is a mortal sin no less than theft or robbery, since a man loves his honour no less than his possessions. If, on the other hand, a man says to another a railing or reviling word, yet with the intention, not of dishonouring him, but rather perhaps of correcting him or with some like purpose, he utters a railing or reviling not formally and essentially, but accidentally and materially, in so far to wit as he says that which might be a railing or reviling. Hence this may be sometimes a venial sin, and sometimes without any sin at all. Nevertheless there is need of discretion in such matters, and one should use such words with moderation, because the railing might be so grave that being uttered inconsiderately it might dishonour the person against whom it is uttered. In such a case a man might commit a mortal sin, even though he did not intend to dishonour the other man: just as were a man incautiously to injure grievously another by striking him in fun, he would not be without blame.

In blogging and on social media there is much sin.

Email ThisBlogThis!Share to TwitterShare to FacebookShare to Pinterest
Labels: I need to repent 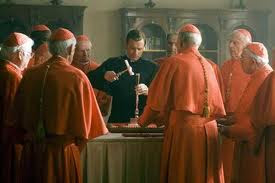 I'm over the papal ring deal.

Over reacted.  I'm blaming negative press and all the criticism against the Pope which influenced my take on what happened.  And then that stupid inclination on my part to defend the Pope when I have been told he doesn't need me doing that.

I hate it when I fall for this crap.

The Pope has a reasonable explanation as well - click here.
Posted by Terry Nelson at 10:42 AM 6 comments:

Email ThisBlogThis!Share to TwitterShare to FacebookShare to Pinterest
Labels: Social media is bad for you 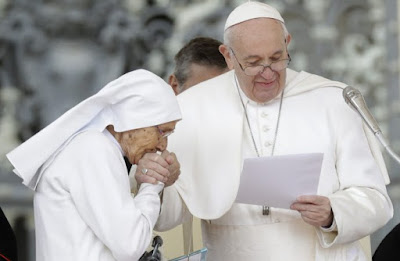 This isn't the first time I've been disappointed in a Pope.

I suppose it is no big deal that the Pope pulled his hand away from laity who sought to venerate the office of the papacy by kissing the 'Fisherman's' ring.  It seemed rude to me, and so I had trouble believing it.  While it is true there may be a good reason, sore hand, fatigue, a signal to discourage clericalism, it just seems to me another option would have been more kind, more respectful to those who were simply following pious tradition.  In the old days, instructions were given to those who would be able to approach the Pope and greet him in audience.  I remember S. Therese and fellow pilgrims were forbidden to speak to the Pope unless he spoke first.

Now we know what not to do.

I guess Popes can be rude, and of course we know even saints can be.  Padre Pio dismissed people for various reasons, his wounds hurt, and sometimes he was gruff with devout women, and people who concealed their sins.

Ratzinger slapped Brian Ross' hand when he tried to get him to comment on Fr. Marcial Maciel Degollado. JPII used to look down the reception line instead of having eye contact with those greeting him - this according to Harry Flynn, something noticeable in photos as well. So men will always disappoint us when we encounter their human foibles.

I have to say, this incident showing Pope Francis rebuffing the pilgrims to the Holy House helps me become more detached from the person of the Pope without diminishing my respect for the Papacy.  P. Francis has made it clear to me that he abhors any sign of clericalism. So I will let it go.

Perhaps it would be more humble for the Servus servorum Dei to kiss the hands of the laity instead?  What? 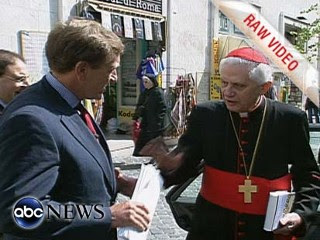 Email ThisBlogThis!Share to TwitterShare to FacebookShare to Pinterest
Labels: Moving on, Religious people are weird

Pope Francis Demonstrates His New Instruction on the Sign of Peace

(Ed. note:  Something tells me the video was altered - not sure.  If it's real, it is strange.  Hopefully some spokesman will explain.)
Posted by Terry Nelson at 11:00 AM 5 comments:

Email ThisBlogThis!Share to TwitterShare to FacebookShare to Pinterest
Labels: what? I like to recall that the Blessed Virgin was prepared for the Annunciation - her entire life was a preparation for that moment.  Therefore this 'Mystical City of God' had to have many secret experiences before the actual Incarnation, which the annunciation of the angel and the consent of the

Blessed Virgin obtained.  (Not sure if I phrased that very well.)

According to the apocryphal Protoevangelion of James, the Blessed Virgin first heard the greeting of the Angel while she was fetching water from the well, frightened, she returned home. The scene is often depicted in iconography depicting scenes from the life of the Virgin.

In the Protoevangelion of James, there is first a “pre-annunciation” scene, in which Mary goes to the well to fetch water. There she hears a voice saying: “Greetings, favoured one. The Lord is with you. Blessed are you among women.” Mary looks around but does not see anyone. Frightened, she goes back inside and, “taking up the purple, she sat down in her house and began to spin.”

The angel then appears visually to her, telling her initially not to be afraid: “You have found favour in the sight of the Lord of all.”

The Annunciation story then continues along the same narrative outline found in the Gospels according to Saint Matthew and Saint Luke until the author returns to the story of Mary’s role in weaving the temple veil: “And she finished the purple and the scarlet and took them up to the high priest.” - continue reading here. 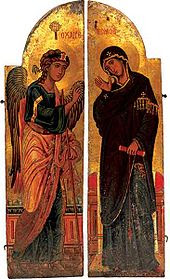 At the moment when the the Angel of the Annunciation revealed himself, the Virgin is depicted weaving the veil of the Temple - in purple and red - the liturgical colors for Lent and Holy Week.

This is the Annunciation scene that appears on the “royal doors” of the iconostasis of almost every Orthodox church.

Mary is depicted either standing or sitting, with purple or red skeins falling from her fingers. The threads Mary is holding reveal that she wove the Temple veil that later was rent from top to bottom when Christ died on the cross. Her acceptance of God’s will in this and in all things is represented by her upraised and open hand or, in some cases, by placing her hand upon her heart.

Saint Andrew of Crete, in his Great Canon, sang to her: “As from purple silk, O undefiled Virgin, the spiritual robe of Emmanuel, His flesh, was woven in thy womb. Therefore, we honour thee as Theotokos in very truth.” - ibid 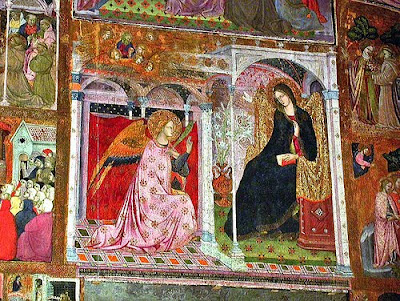