Something I discovered about St. John of God 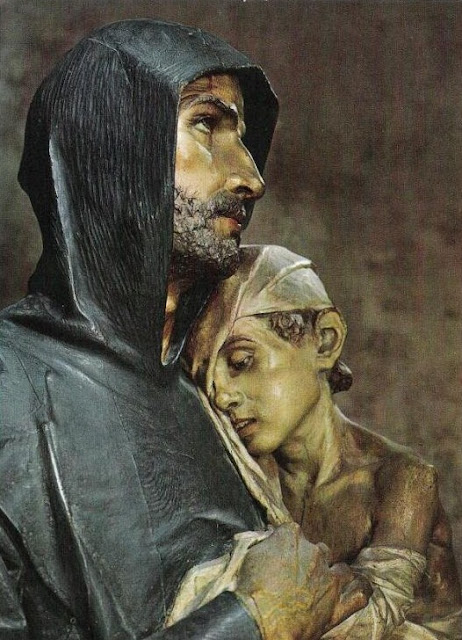 Something hardly ever noted in popular accounts of his life.

He was abducted as a child.


John of God was born João Duarte Cidade (Portuguese form, the Spanish form is João Cidade Duarte) in Montemor-o-Novo, now in the District of Évora, Kingdom of Portugal, the son of André Cidade and Teresa Duarte, a once-prominent family that was impoverished but had great religious faith. One day, when John was eight years of age, he disappeared. Whether he had been deliberately kidnapped, or whether he had been seduced from his home by a cleric who had been given hospitality in the home, is not clear. According to his original biography, his mother died from grief soon after this and his father joined the Franciscan Order.

The young Cidade soon found himself a homeless orphan in the streets of Oropesa, near Toledo, Spain. There, in a foreign land, he had no one to care for him, nothing on which to live and he had to be content with whatever food he could find. He was eventually taken in by a man called Francisco Mayoral and the boy settled down as a shepherd caring for his sheep in the countryside. - Wikipedia

"Seduced from his home by a cleric..."

I never noticed that before, nor do I recall coming across it in any biography of the saint.  As I noted on Facebook, St. John of God suddenly becomes an even more interesting saint, deserving of our notice in these days of child sexual abuse scandals by clergy, as well as the problem of human trafficking - especially as it involves children.

The abduction question seems to me to be more credible since it arose with his original biographer, Francisco de Castro.


Francisco de Castro was the chaplain at John of God’s hospital at Granada. As a youth he knew the Saint and he used material gathered from eyewitnesses and contemporaries of his subject. It was published at the express wish of the Archbishop of Granada who gave financial backing to its publication. Castro began writing in 1579, twenty-nine years after John of God’s death, but he did not see it published for he died soon after completing the work. His mother, Catalina de Castro, had the book published in 1585. - source

The suspicion he was taken by a cleric who might have seduced him is startling, and relates so well to our times.  Clerical seduction and abuse, albeit seemingly pervasive in the 20th century, is obviously not endemic just to our epoch.

How did John deal with it?

Obviously in his days complaints of abuse and ill treatment were not dealt with in the same manner we do today.  John didn't file lawsuits or claim PTSD, much less write a book on what he suffered as a child.  There's no evidence he complained of parental neglect or blamed any of his failings on the abuse he suffered.  He joined the military and had a string of occupations, even accused of theft and dereliction of duty.  Military life wasn't exactly virtuous, so I suspect - I may be wrong - that the saint has some moral problems as well.

After many travels and troubles, the saint had a vision of the Infant Jesus who instructed him to go to Granada, and gave him his name, John of God.  There he became a bookseller of devotional works.

Later, after an intense conversion experience following a sermon by S. John of Avila, the saint encountered mental difficulties.  Some biographers suggested he feigned mental illness as a sort of 'fool for Christ', I wonder if it wasn't more a sort of purification, mixed with a sort of mystical grace which Teresa of Avila mentions when discussing the foolishness for Christ St. Francis of Assisi experienced.  I don't know what the Church says in that regard however.


"At the age of 42, he had what was perceived at the time as an acute mental breakdown. Moved by the sermon, he soon engaged in a public beating of himself, begging mercy and wildly repenting for his past life. He was incarcerated in the area of the Royal Hospital reserved for the mentally ill and received the treatment of the day, which was to be segregated, chained, flogged, and starved. John of God was later visited by John of Avila, who advised him to be more actively involved in tending to the needs of others rather than in enduring personal hardships. John gained peace of heart, and shortly after left the hospital to begin work among the poor." - Wikipedia

John of God was instructed in a vision of Our Lady to work with the poor, which he did, while many continued to suspect he was mentally ill.  Eventually the Bishop helped him and others came to assist him in his work, leading to the establishment of the Brothers Hospitaller.

Abducted, abused, orphaned, inconstant, eccentric, and no support group or therapy save the Love of God - Caritas.

He's a wonderful model for losers. 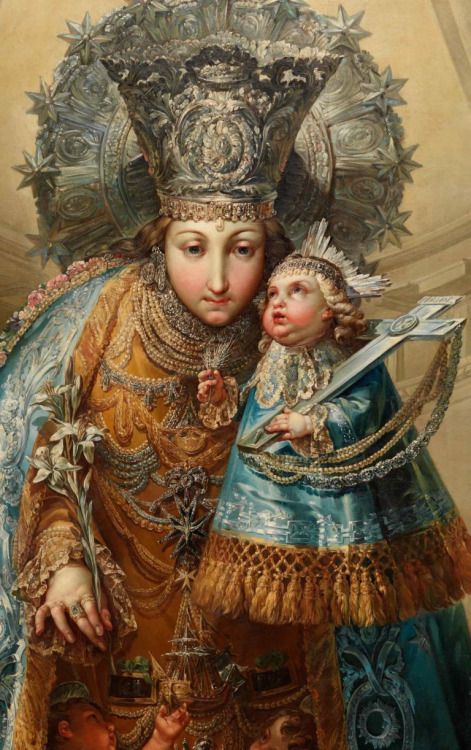 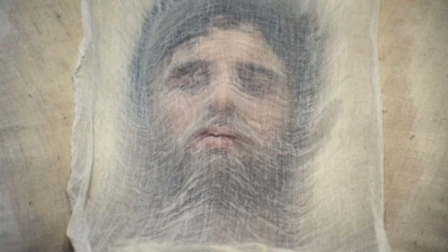 Posted by Terry Nelson at 12:00 AM No comments:

Email ThisBlogThis!Share to TwitterShare to FacebookShare to Pinterest
Labels: Lent 2019

What to give up for Lent?

I'm not sure that is the right focus.

Give something up and give alms.  It's classic, but it is only a pious practice without love.  The older I get, the more I understand giving up candy and cartoons really isn't what it's all about.  Giving up sin, yes.  Giving up things that lead to sin, yes.  Giving up legitimate joys and pleasures, yes indeed.  But why?

I like to approach Lent in this way:  Meditating on the counsels of John of the Cross, noting especially his teaching on the purification of the will through charity.  For me, it lends a more profound meaning and purpose to the observance of Lent.

For a treatise on the active night and denudation of this faculty, with the aim of forming and perfecting it in this virtue of the charity of God, I have found no more appropriate passage than the one in chapter 6 of Deuteronomy, where Moses commands: You shall love the Lord, your God, with all your heart, and with all your soul, and with all your strength [Dt. 6:5]. This passage contains all that spiritual persons must do and all I must teach them here if they are to reach God by union of the will through charity. In it human beings receive the command to employ all the faculties, appetites, operations, and emotions of their soul in God so that they will use all this ability and strength for nothing else, in accord with David's words: Fortitudinem meam ad te custodiam (I will keep my strength for you) [Ps. 59:10].


Talk about what to give up and give alms - all must be an exercise in charity, a response of love, since as St. John notes, Without works of charity, faith is dead [Jas. 2:20].

Email ThisBlogThis!Share to TwitterShare to FacebookShare to Pinterest
Labels: The lack of charity seems to me to be my predominant fault 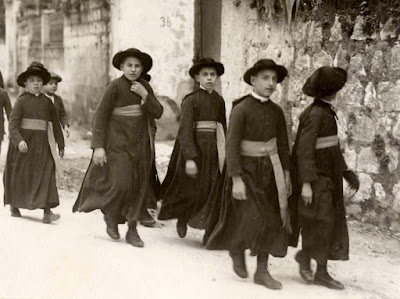 Last year Fr. Altier spoke about the origins of the 'crisis'.

I took some time to digest it, and despite his inclusion of the Bella Dodd communist plants conspiracy theory - which seems to have some foundation in truth - especially in Europe - I believe Fr. Altier's version of things.  Especially since he had to face a great deal of difficulties in his seminary experience.  He knows what he is talking about.

We need a priest like him to affirm Catholic teaching on sexuality and marriage, and especially to recognize what homosexual abuse is and how it works.  Hence the title for this post.  One can't wave this off.  Predatory homosexuality is an inconvenient truth.  Especially in an all boys to men situation as in seminaries, high schools, Boy Scouts, sports, locker rooms, and so on.  Such environments can be opportune for predatory behavior - as everyone knows.  A friend on Facebook posted a link to Fr. Altier's homilyalong with his personal experience of seminary life in the late '90's.  His comments prompted me to post Altier's homily in order to save it in my archives.

Where is the doctrinal integrity? Where is the moral teaching? Someone that is not living it is not going to teach it.

Now if we just use the McCarrick situation, since that’s been in the news, everyone is disgusted with what this man did to boys and to young men, and rightly so. But anybody, by the way, who thinks that all of this is just great – they’re such nice people and they’re no different – look at what McCarrick did: that is what predatory homosexuality looks like.

These are not nice people who are just like everybody else. But as disgusting as all that is, think about the fact that this man was in the pulpit for 50 years, he sat in the confessional, he was in the bishop’s office making decisions about priests’ lives, about diocesan finances, about the direction of the diocese and so on. He served on Vatican commissions, he was a consultant to the Vatican, he made lots of bishops. What kind of advice do you think somebody struggling with some sexual problem in the confessional would have gotten from somebody like this?

What kind of men do you think might have been elevated to be bishops by somebody like this? - Fr. Altier