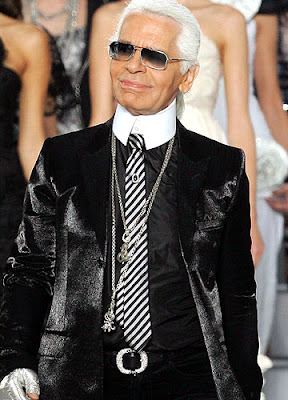 And Karl.
.
Karl Lagerfeld is one of the very last emperors of haute couture (Chanel), yet the tres influential German born maestro made a couple of controversial statements regarding the international agenda promoting same sex marriage and same sex adoption of children.  He's against it.
.
“I’m against it (gay marriage) for a very simple reason: In the 60's, they all said we had the right to the difference. And now, suddenly, they want a bourgeois life,” Lagerfeld recently told contemporary youth culture magazine, Vice. “For me it’s difficult to imagine—one of the papas at work and the other at home with the baby. How would that be for the baby? I don’t know. I see more lesbians married with babies than I see boys married with babies. And I also believe more in the relationship between mother and child than in that between father and child.” - Source

See - not all gays are nuts.  Mr. Lagerfeld only looks eccentric - he's quite nice however - he just happens to love menswear from the 17th century.  He definitely makes sense here - I've been telling gay people this for years - especially those pushing for inclusion in the Catholic Church.  Hello?  Any self respecting sexually active homosexual can't really want to be so square and homogenized, right?  (Well some might.)  Nevertheless, today there are some very vocal gay people who seem to crave some sort of old fashioned normalcy, hence they opt for a hip "Little House on the Prairie" lifestyle.  They want their own version of traditional domesticity, a place at the table on the PTA, while trying to take over the pulpit, like twisted little church-ladies, ranting:  "Gays would not do naughty things if they were accepted like straight people, and all the stereotypical stigmas were outlawed."  Oh yes they would George slut-in-the-bushes Michael.
.
Karl is absolutely correct: "suddenly, they want a bourgeois life!"   (He might have added a bit from Karen Walker:  "Good Lord! Don't they know what that'll do to the fall line?")
.
Anyway, how Stepford-esque.
.
Vogue redux.  (Love how this song starts out.)
Posted by Terry Nelson at 11:55 AM

Email ThisBlogThis!Share to TwitterShare to FacebookShare to Pinterest
Labels: fashion and humor - works for me