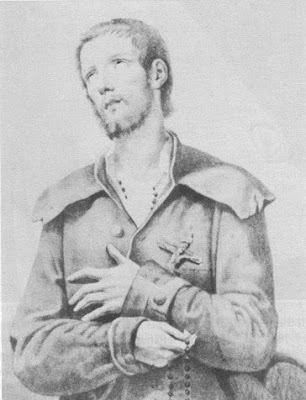 Today is the feast day of the mendicant/pilgrim saint, Benedict Joseph Labre.  It is also Pope Benedict XVI's birthday.  St. Benedict Joseph must be a very special patron to the Holy Father - as he is for me.

St. Benedict Joseph Labre was a single layman.  God called him to such a life.  Some people like to say there is no such thing as a vocation to single life - one is either called to priesthood, religious life, or the married state.  The single life is not a vocation of course, it is a state in life.  In this state a person is called to work out his or her salvation, to accomplish the will of God - which is our salvation.  Hence, one must be prudent when telling others there is no vocation to the single life, lest they discourage them from seeking God according to their state in life - which happens to be the single life.

St. Benedict tried his vocation with the Carthusians and Trappists, although he was subsequently rejected due to a disorder or defect in his temperament.  Some believe he may have suffered from a form of mental illness.  Whatever the case, the Saint lived a devout life as a layman.  Inspired by an interior impulse, Benedict Joseph followed the pattern of life set by St. Alexis, the Roman noble who left his wife on their wedding night and lived the rest of his life as an ascetic - a pilgrim and mendicant.

I would like to suggest St. Benedict Joseph Labre as a patron for laymen who find themselves rejected or refused entrance to seminary or religious life due to some disorder or defect in their temperament.  I'm convinced there are some men who have gone through very deep conversion experiences, and in some cases, experienced God's grace of healing of this or that disorder.  Forgetting to account for the grace of God, seminaries and religious houses may continue to refuse these men admission.  Perhaps through the intercession of St. Benedict Joseph, such a lack of faith on the part of superiors could be remedied, thus clearing the way for these men to be admitted to Holy Orders or some form of religious life after all.

Failing that, I would hope St. Benedict Joseph could be a model and patron especially for such men, that they not lose hope or abandon the practice of religion all together.  The penance of St. Benedict Joseph not only comprised homeless poverty, but actual rejection by representatives of the Church and society.  His is a wonderful example of humility, patience, and penance in the following of Christ.   One versicle for his Mass is taken from Paul's Letter to the Hebrews:

"Let us go to him outside the camp, bearing the insult which he bore.  For here we have no lasting city; we are seeking one which is to come.  Through him let us continually offer God a sacrifice of praise, that is, the fruit of lips which acknowledge his name." - Hebrews 13: 13-15 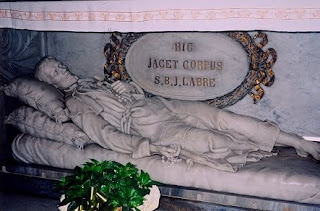