"To suffer and be despised." - St. John of the Cross 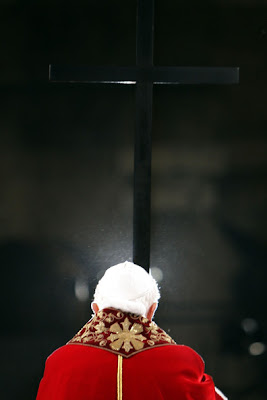 "We can only acquire a 'scientia crucis' if we have the grace to taste and relish the Cross through and through." - St. Teresa Benedicta of the Cross
.
When I was little, family and school mates often mocked me for my devotions, attending daily Mass and staying after school to pray my rosary.  I can't remember ever being angry or fighting anyone because of it.  When one of the parish priests told me I was using religion as an escape - I wasn't big into sports as a kid - I didn't know how to respond.  He also told this to my dad, and so many times I had to "sneak away" to make a visit to the Blessed Sacrament and Our Lady.  Once or twice a friend of my brother, who happened to be an altar boy,  would see me in church "after hours" and tell my brother - together they would make fun of me.  Another friend of my brother's who intended to enter seminary, once told me I could never be a priest because I was too pious.  I never got mad or tried to defend myself - I just felt a deep sense of sorrow and sadness, which I offered up.
.
I only relate all of this to explain how I feel about the attacks upon the Holy Father and the Church - especially by those who profess to be Catholic.  Surprisingly, I'm not angry about it.  I feel no need to lash out or attack the "enemy".  Instead I feel the most peculiar sorrow - much like I felt as a little kid - although it seems more intense than that.  It is more akin to pain, and then sorrow and sadness, which I offer up.
.
I consider it a special grace from the Divine Mercy.
.
Novena prayer for the Pope.
.
Photo credit: Zimbio
Posted by Terry Nelson at 12:00 AM

Email ThisBlogThis!Share to TwitterShare to FacebookShare to Pinterest
Labels: Novena for the Holy Father