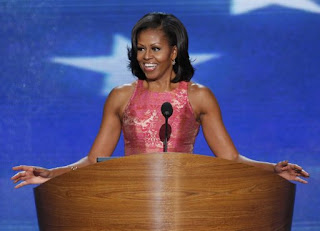 Just a couple of thoughts...

I didn't realize the DEMs were so in-your-face pro-abortion.  I know they are pro-choice - I thought that's how they are supposed to say it - but that woman from NARAL really pushed abortion.  No more pretending.  (I haven't been keeping up with the pro-aborts propaganda I guess.)

I actually thought last night's deal was pretty exciting - I watched it from start to when the power went out at my house.  No, I did not watch the Republican Convention until Romney's speech.  The power  came back on just when Mrs. Obama was wrapping up.  She did good.  What?  She did.  In fact I thought Kathleen Sibelius actually presented well too.  Don't worry - I see how it all works now...

So here's the deal.  Like it or not - last night's coverage showcased the United States we live in.  The celebrities were in the audience, the hot button issues were being approved, change was acclaimed, 'if you work for it' that is.  As for the change, the advances, you have to wonder, how are you ever going to take back from women what they claim as their right?  The people who are up there on the platform are the ones calling the shots.  If they win - their platform is the future - and it seems to me it is what the rest of the world wants from us as well.  They kept saying 'this is change'.

I blame it on the Novus Ordo.

BTW - I heard people mention God - even Rahm Emanuel said God bless America.  I mention it because some people were saying God was banned from the Convention.


Disclaimer:  Nope - I do not support the Obama people at all - but they were so convincing - I see why popular culture follows along and believes in the hope and change proposition.  The Dems have always had star power and trend on their side.
Posted by Terry Nelson at 12:01 AM