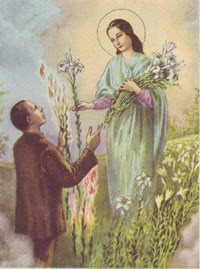 I read somewhere that St. Maria Goretti was more concerned that her attacker would commit mortal sin than she was for her life.  As she lay dying in the hospital, the young Saint forgave her attacker.

The proof of her forgiveness manifested itself in a dream experienced by the would be rapist while in prison.  In the dream, Allessandro was visited by the Saint, extending her forgiveness to him in the form of a lily.

Fifty years later, her murderer joined Maria's mother to be present at the canonization of her daughter in 1950.

It seems to me that the victim can indeed forgive the perpetrator.  The miracle of Allesandro's conversion suggests to me that without that kind of charity, one is not yet completely healed.

Email ThisBlogThis!Share to TwitterShare to FacebookShare to Pinterest
Labels: mercy and truth have met, sexual abuse and justice