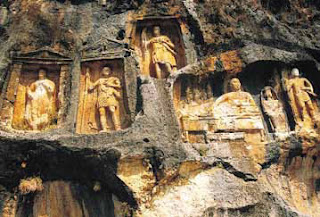 Niches in hell... shrines of self-opinion and pride for the arrogant.
virtual insanity.

I forgot what I was looking for but I came across a 'Catholic' forum conversation - pronouncing the 'doctrine' Catholic women should not go to university or waste their money on higher education if they are going to be married.  (Now I know where one of my friends gets his ideas!  Ha ha!)  The thread continued onto issues of modesty: should you be modest in the privacy of your home?  In bed?  The participants appeared to involve single men and women and the discussion had me wondering how mature or stable they might be.  It was a world - or chat room - I never want to get involved in.  Not that it makes any difference, the site was a 'sede' site - sedevacantist - although I'm told such discussions take place on other traditional Catholic sites as well.  On the site I was reading, one fellow actually recommended his readers read Mel Gibson's dad's book on Catholicism.  I know!

So anyway.  The experience helped me see how there are little niches in cyberspace - little clubs or cliques, where the discussions which take place are peculiar to their special interests.  Just like here at Abbey Roads.

To repeat what I said in an earlier post, 'don't go to strangers'... and I might add, don't get too weird - lay off the forums and Facebook and Twitter and blogs - it's an awful lot of biased chatter.  Read the Catechism and Scripture instead - and try praying more.  The rosary is good - 20 decades now.  That should keep our meddlesome minds busy and grace-filled!  Isn't that right Ros?


Photo:  HUMAN ROCKS
At the end of the stony road of 2 km, which heads to the west at the 5th km of the asphalt road heading from Kızkalesi to Hüseyinler Village of Silifke, you reach the Devil's River. At the steep slope of this valley, in 9 niches on the surface of rocks, there are 11 men, 4 women, two children and one mountain goat embossment, coming from the 2nd century AD. - Source
Posted by Terry Nelson at 11:44 AM

Email ThisBlogThis!Share to TwitterShare to FacebookShare to Pinterest
Labels: no wonder normal people are so often repulsed by religious people