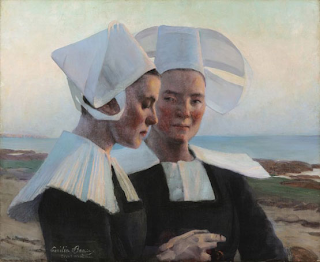 Throw a black veil on these two (or not), and you've got nuns.


*Some nun's habits originated from the fashion of the day and locale of the foundress.


Perfectae Caritatis never said “abandon the habit” but it left it to each community to interpret their mission and determine their dress-needs accordingly.  For some that meant shedding the habit, which had become an anachronistic reflection of what had been the “ordinary” wardrobe of a foundress. As a Cenacle Sister once explained to me, the pleated headpiece and bonnet they wore until the mid-1960′s had nothing to do with “custody of the eyes” as some might imagine, but was simply a traditional reflection of what Couderc and her secular contemporaries wore. Their purple capes were designed not with a mind to penance, but because the abundant local flora of Lalouvesc allowed for the plentiful weaving of purple cloth. For these sisters, whose charism is all about retreat-giving, hospitality and spiritual direction, it made a great deal of sense for them to abandon such outmoded garb, which would almost seem pretentious, given their work. With few exceptions, most of these sisters are identified by the broad gold cross they wear as a pin or necklace. - The Anchoress