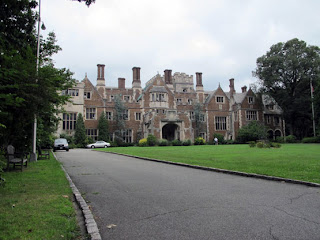 Inisfada is now a retreat house.  The incredible mansion was donated to the Jesuits in 1934 by Genevieve Garvan Brady, widow of the business mogul Nicholas F. Brady, who died in 1930.  Both devout Catholics, they built their home on what came to be known as the Irish Channel on Long Island.


While not exactly an insult, the "Irish Channel" wasn't precisely a compliment either. During the politically incorrect 1920s, it was a smug WASP joke referring to an imprecisely bounded section of Long Island's North Shore favored by rich Irishmen.

The Irish business barons of the late 19th and early 20th centuries tended to fall into three groups vis a vis Catholicism and American "society." According to the old saw, heaven was a palace with many doors, but a gentleman used the one marked "Episcopalian." Ergo, the first group either abandoned Catholicism altogether and/or raised their children in whatever fashionable Protestant church was handiest. The second group may or may not have been good Catholics, but didn't care about society so it didn't matter what they did. The third group embraced Catholicism with a special intensity, sometimes showering Catholic charities with sufficient millions to attract the attention of the pope himself. Utilities and tobacco mogul Nicholas F. Brady (1878-1930), builder of the Tudor Revival palace in the vintage aerial below, falls into category three. He called his Manhasset estate Inisfada (pronounced in-ish-FAH-dah), which means Long Island in Gaelic. - NYSD

Cardinal Pacelli was once a guest ... 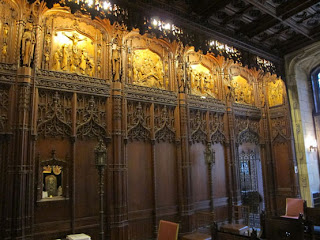 One of the chapels.

St. Ignatius Retreat House - but not for long.


After 75 years, first as a Jesuit school, then a seminary and more recently a retreat house, St. Ignatius is closing Inisfada next year. This was an economic decision that has saddened everybody. The church's long stewardship of this invaluable cultural artifact comes, however, with a responsibility to the greater community. Disaster threatens Inisfada, as much from vandals who would destroy it if improperly secured, to developers who would demolish it to build another condominium community. Not yet officially on the market, interested parties are circling the property already. We can only hope that everyone involved does the right thing. As of this writing the retreat house is still functioning; the link is www.inisfada.net. - NYSD 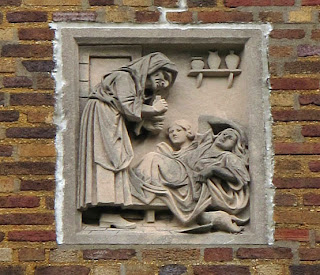 The same year that Mrs. Brady donated Inisfada to the church, she married William J. Babbington Macauley, the Irish Free State's Minister to the Holy See. One year later, in 1938, at the age of 53, she died in Rome as suddenly and unexpectedly as her first husband. A thousand people attended her memorial at St. Ignatius Loyola on Park and 84th. She was buried, alongside her first husband at a Pennsylvania novitiate he had endowed before his death. - New York Social Diary

The estate is much too expensive to maintain, which strikes me as very sad - if the donors had only known.  It reminds of how many churches and monasteries, once built, bequeathed, endowed, both by wealthy and poor Catholic faithful alike, which have now been sold, torn down - or simply sacked as a result of the upheaval generated after Vatican II.  Equally as sad is the knowledge some of these properties have had to be sold to provide funds for lawsuits against the Church.  The Protestant reformers would have been delighted if they had foreseen what has happened.

For many more photos, go to: New York Social Diary: Big Old Houses
Posted by Terry Nelson at 12:30 AM

Email ThisBlogThis!Share to TwitterShare to FacebookShare to Pinterest
Labels: The Loss of Catholic Identity