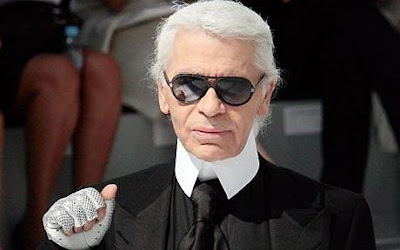 "The animals would eat us if we didn't kill them." Karl Lagerfeld
.
Brains and talent, a good combination for someone who looks like Michael Jackson's mortician. In an interview, German born fashion designer for Chanel, Karl Lagerfeld, discusses wearing fur and eating meat.
.
"Animals should be killed "nicely" if at all possible, said Lagerfeld, who admitted to being queasy about eating meat.
.
"I can hardly eat meat because it has to look like something what it was not when it was alive," he said.
.
He concluded: "In a meat-eating world, wearing leather for shoes and clothes and even handbags, the discussion of fur is childish." - Telegraph
.
When is the last time baby seals, little foxes, and minks attacked people? For me the problem of wearing fur is the problem of cruelty as well as harvesting animals simply to satisfy vanity and greed. Lagerfeld should be reminded that the market for fur grows proportionately as designers use (misuse) it. Inciting countries such as China to skin dogs and cats alive to supply fur to the clothing industry.
.
On size 0 models.
.
In an interview on the Radio 4 Today programme, Lagerfeld also said the issue of size zero models was insignificant compared to the "zillions" of fat people.
.
But he said: "In France there are, I think, less than one per cent of people who are too skinny.
.
"There are nearly 30 per cent of young people who are too fat. So let's take care of the zillions of the too fat before we talk about the percentage that's left." - Telegraph
.
Lagerfeld's take on the recession.
.
In further questions Lagerfeld said he viewed the global recession as "more like a cleaning up."
"It was too rotten anyway, so it had to be cleaned up," he said. - Telegraph
.
Someone needs a makeover.