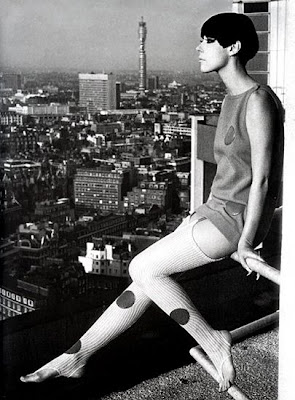 .....
.
Peggy Moffit was one of the most famous fashion models in the 1960's. She was best known as fashion designer Rudi Gernreich's lead mannequin and muse. She epitomized the '60's look, sensationalizing the label when she modelled Gernreich's topless swim suit. The suit wouldn't even raise an eyebrow today - as it was, the piece was unattractively asexual - much like Moffit's look - not that she was unattractive - her look was decidedly asexual. I believe the era pioneered much of the gender-neutral trends, both in fashion and politics, we have lived with since; although, I would guess Chanel initiated gender-neutral fashion long before the 1960's, when she introduced pants for women.
.
Miss Moffit, who turns 70 this year, was also a collaborator in Gernreich's designs, and retained label and design rights to the firm after the designer's death.
Posted by Terry Nelson at 3:19 PM