Ignore the “absolutely false, pure inventions,” of Dollinger, Socci, and those others ... 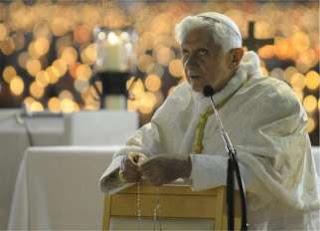 There is a letter from Benedict XVI to back up the Vatican communique denying there is more to the "Third Secret" ...

It never ends does it.  Even priests are misled by these false inventions of socalled authorities on Fatima.  Und ze know who ze are.

A letter published by Kevin Symonds:


In response to your very kind letter of February 22, I can tell you that a fourth secret of Fatima does not exist. The published text is full and there is nothing else.


When I said that this secret is not just about the past, I wanted to clarify and explain simply the genre of such words, we can never reduce only on a specific point. It’s an ongoing reality that the Church and the Pope are threatened by evil forces.


Even if we can interpret the vision of a specific event, you can still see in it also a reference to ever new threats and dangers that continue. Above all it is important that the call to prayer, which supports and assists the Pope and the Church, remain present after this time.


I hope I have cleared your request and stay with my greetings and my blessing.

Email ThisBlogThis!Share to TwitterShare to FacebookShare to Pinterest
Labels: Fatimistic perspectives on destroying the Church