I was wondering when Anna Katherine Emmerich's writings would make the rounds again... 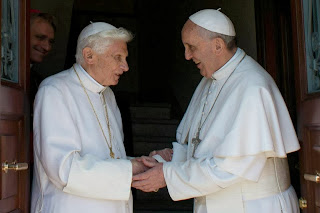 "I saw also the relationship between two popes ..."


The prophecies, that is.

Anna Katherine Emmerich is beatified - she is a beata.  Her writings were not beatified with her.  In fact, many are uncertain her revelations as recorded by Brentano are her words verbatim, or an interpretation by Brentano.  Rod Dreher points that out in a post of his on Emmerich, which caught my attention.

I know several people who refer to Bl. Emmerich's writings when pointing out the evils in the Church today.  I know the so-called prophecies which they claim point to the modern, post-Vatican II apostasy - and especially the NO-Mass.  When one reads these things as gospel, or hears them explained and 'promulgated' by uber-traditionalists, one cannot help become infected with a certain uneasiness, and if one gives them any credence at all, it easily taints one's view of the Catholic Church as it is today - since Vatican II.


“I saw also the relationship between two popes … I saw how baleful would be the consequences of this false church. I saw it increase in size; heretics of every kind came into the city of Rome. The local clergy grew lukewarm, and I saw a great darkness…

“I had another vision of the great tribulation. It seems to me that a concession was demanded from the clergy which could not be granted. I saw many older priests, especially one, who wept bitterly. A few younger ones were also weeping. But others, and the lukewarm among them, readily did what was demanded. It was as if people were splitting into two camps.”

“I see the Holy Father in great anguish. He lives in a palace other than before and he admits only a limited number of friends near him. I fear that the Holy Father will suffer many more trials before he dies. - Source

If the prophecy is true - if it pertains to a specific time, it is more than likely it pertains to the times wherein it was recorded, which may explain why someone like Bretano would elaborate in such detail.  If it pertains to the future, it becomes even more obscure, since the author is limited by his own interpretation within the scope of his experience and times.  Likewise, prophecy tends to be symbolic and  is subject to change.  It may also be interpreted to suit any number of circumstances in and through clever interpretation.  That said, it is up to the Church to interpret and approve or say that any private revelation is free from doctrinal error, etc. - Bl. Emmerich's works have no Vatican seal of approval.  She's beatified - not her writings or mystical phenomena associated with her.

Dreher wisely concludes his article with this:


I think this kind of paranormal prophecy thing can be real and true, but there’s so much potential for abuse, deception, and confirmation bias that one should keep it at arm’s length. - ibid

It also should be noted that Catholics are not obliged to believe or follow private revelations and prophecy:


67 Throughout the ages, there have been so-called "private" revelations, some of which have been recognized by the authority of the Church. They do not belong, however, to the deposit of faith. It is not their role to improve or complete Christ's definitive Revelation, but to help live more fully by it in a certain period of history. Guided by the Magisterium of the Church, the sensus fidelium knows how to discern and welcome in these revelations whatever constitutes an authentic call of Christ or his saints to the Church.
Christian faith cannot accept "revelations" that claim to surpass or correct the Revelation of which Christ is the fulfillment, as is the case in certain non-Christian religions and also in certain recent sects which base themselves on such "revelations." - CCC


I don't usually read Rod Dreher, but I understand he was a convert to Catholicism and then left the Church to become an Orthodox Catholic.  He makes some interesting points whenever he writes on Catholic matters.  As an ex-Catholic, Dreher's comments, though insightful, can also be divisive, as in his Time article about not returning to the Catholic Church.  I come away with the impression that some of his commentary may not always be helpful in building up the Body of Christ.  It strikes me that Catholic Traditionalists have quite similar issues   A few converts seem to have church shopped and denomination jumped over the years.  If they came into the Catholic Church, and then left, I question who they are seeking.  Did these folks ever encounter Jesus Christ in the Roman Catholic Church?  I pray for their return to the Church and I'm sympathetic to their pain and confusion over whatever scandal drove them away - but leaving the Catholic Church is a problem - especially the question of being led by the Holy Spirit.